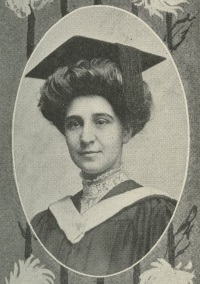 Susie May Ames (10 January 1888–30 July 1969), historian, was born at Pungoteague, Accomack County, the eldest of five daughters and second of seven children of Samuel William Ames, a businessman, and Sarah Anne Edmonds Mears Ames. She attended local schools and graduated in 1908 from Randolph-Macon Woman's College (later Randolph College) in Lynchburg, with a major in English and minor in Latin. Her extracurricular activities included terms as president of the Franklin Literary Society and the Eastern Shore of Virginia Club and editor-in-chief of the Tattler, the monthly student magazine.

While teaching at levels then commonly open to women, Ames set her sights on graduate study and attended summer sessions in English at the University of Chicago in 1915 and history at the University of California in 1923. That autumn she was appointed instructor in history at Randolph-Macon Woman's College, one of the dozen institutions in the country that offered serious educational opportunities for women. From 1923 to 1955 Ames devoted her life to the college and its students, accepting promotions to adjunct professor in 1926, associate professor in 1940, and professor in 1954.

Historian
Fewer than 3,000 American women a year received master's degrees in any field when Ames joined her alma mater's faculty. She promptly enrolled at Columbia University, where she earned an A.M. in 1926 and a Ph.D. in 1940. A scholarship in 1927 enabled her to attend the European Summer School of the Bureau of University Travel. During a leave of absence for her doctoral residence from 1929 to 1931, Ames was a member of Evarts B. Greene's seminar and studied with Robert Livingston Schuyler, William L. Langer, Dixon Ryan Fox, and Allan Nevins. A manuscript she discovered at the New York Public Library became the basis of her first major article: "A Typical Virginia Business Man of the Revolutionary Era: Nathaniel Littleton Savage and His Account Book," Journal of Economic and Business History 3 (1931): 407–423. She also indulged an interest in the Civil War on the Eastern Shore, gathering the recollections of area residents by interview and letter.

Ames was one of fewer than 500 women to earn a doctorate in history between 1920 and the completion of her graduate work in 1940. Her dissertation, published as Studies of the Virginia Eastern Shore in the Seventeenth Century (1940; reprinted 1973), was a pioneering investigation of social and economic history based on thorough analysis of the earliest county court records in the nation. Some reviewers mistakenly dismissed the Eastern Shore as atypical of the early colony, but Ames's scholarship anticipated by three decades many methodological concerns and findings of subsequent Chesapeake historians.

Ames never married, taught a heavy course load, and took care of her aging mother. Although a member of many professional associations (and a contributor or reviewer for many journals) she, like many other female academicians in the South, was often unable to attend their meetings. Her interest in social history found expression in polished essays first presented, as often as not, as talks to women's clubs. Ames interacted with leaders of the historical profession at Columbia and elsewhere but had little contact with historians at Virginia's colleges and universities, which offered fewer opportunities for female scholars than did some of their northern counterparts.

Pathbreaking Eastern Shore Research
After publishing her dissertation Ames reacted to European dictatorships and World War II with an investigation of the flagrant aggression of one of Accomack County's early chief magistrates, Edmund Scarburgh. Jamestown authorities merged Northampton and Accomack Counties in 1670 to reduce his influence and separated the counties again two and a half years after his death in 1671. In a draft Ames mentioned parallels with "the emergency of today," but she deleted the section before publishing "The Reunion of Two Virginia Counties" in the Journal of Southern History 8 (1942): 536–548. Similarly, issues of civil rights and Massive Resistance in the 1950s prompted her inquiry into "Federal Policy Toward the Eastern Shore of Virginia in 1861," Virginia Magazine of History and Biography 69 (1961): 432–459. Ames believed that "the basic character of a nation or people is largely determined by its early years," but her lectures and publications taught people to draw their own lessons from history.

By February 1941 Ames had begun work on her edition of County Court Records of Accomack-Northampton, Virginia, 1632–1640, which the American Historical Association published in 1954 as volume 7 of the American Legal Records series sponsored by the Littleton-Griswold Fund. Ames saw the Eastern Shore as "a small laboratory in which to study the transit of civilization from the Old World to the New." Her interests transcended the preoccupation of the series editors with legal records that showed "adherence to and adoption of English law and forms." Ames cared more for "Law-in-Action," as she explained in an article of that title about Eastern Shore court records that appeared in the William and Mary Quarterly, 3d ser., 4 (1947): 177–191. On 2 October 1944 she was appointed to the Virginia World War II History Commission, which was charged with documenting the state's involvement in that conflict. Ames also wrote two long chapters on the Eastern Shore during the colonial period for Charles B. Clark, ed., The Eastern Shore of Maryland and Virginia (1950).

Later Years
After twenty-five years at Randolph-Macon Woman's College, Ames took a leave of absence for the 1948–1949 academic year to care for her mother, and she moved back to Pungoteague for the same reason when she retired in June 1955. Still an active scholar, after giving up teaching Ames edited a second volume of Eastern Shore legal records covering the years 1640–1645. The Virginia Historical Society published it posthumously in 1973. As part of the celebration of the 350th anniversary of the Jamestown settlement, Earl Gregg Swem commissioned her to write Reading, Writing and Arithmetic in Virginia, 1607–1699 (1957), and in 1965 she published "The Bear and the Cub": The Site Of The First English Theatrical Performance in America. Ames was admitted to Phi Beta Kappa in 1943 and awarded a certificate of commendation from the American Association for State and Local History in 1964. She was a founder and president of the Eastern Shore of Virginia Historical Society and was active in many patriotic organizations, local women's and garden clubs, and the Pungoteague Methodist Church.

Susie May Ames died on 30 July 1969 at the Hermitage in Onancock, Accomack County, and was buried in the cemetery of Saint George's Episcopal Church near Pungoteague.

Written for the Dictionary of Virginia Biography by Jon Kukla and J. Jefferson Looney.