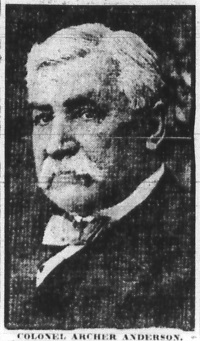 Archer Anderson (15 October 1838–4 January 1918), industrialist, was born at Old Point Comfort, the eldest of five sons and seven daughters of Sarah Eliza Archer Anderson and Joseph Reid Anderson, a United States Military Academy graduate then stationed at Fort Monroe. The birth took place in the home of maternal grandfather Robert Archer, a surgeon also serving at the fort. In 1841 the Andersons moved to Richmond, which remained their permanent home. Joseph Reid Anderson first managed, then leased, and finally purchased a controlling interest in the Tredegar ironworks, which developed into one of the South's major industrial complexes under his leadership and subsequently played an important role in the Confederate war effort.

Early Years
Supervised early on by two "cultivated gentlewomen," the Misses Myers, Anderson later attended Turner's Classical School. Though fond of sports, he was also devoted to books. By the time he entered the University of Virginia at the age of fifteen he was fluent in French, Italian, and German, and could read and write Latin and some Greek. Until his death he continued to enjoy the classics in their original languages. Completing his M.A. in two rather than the usual three years, after graduation in June 1856 Anderson traveled in Europe for two years, studying briefly at the University of Berlin before returning to study law at the University of Virginia for the 1858–1859 school year.

In the summer of 1859 Anderson returned to Europe and on 9 August married Mary Anne Mason, the daughter of U.S. minister to France John Young Mason, a Virginian, in an Episcopal ceremony at the American legation in Paris. After a tour of Switzerland and Germany the newlyweds returned to Virginia and Archer entered the employ of his father at the Tredegar ironworks. The Andersons had four sons and three daughters, of whom the eldest son died young.

Civil War
Anderson belonged to Company F, 1st Regiment Virginia Volunteers, a militia unit of prominent Richmond men. On 28 June 1861 he and his comrades were mustered into Confederate service as Company F of the 21st Regiment Virginia Infantry. In September he was appointed assistant adjutant general, 1st Brigade, Aquia District, with the rank of captain. Anderson fought in the Seven Days' Battles in 1862 and later that year, in a skirmish before the Battle of Sharpsburg (Antietam), had his horse shot from under him and was rendered unconscious for nearly ten hours. After his transfer to the Army of Tennessee, he lost another horse in the same manner at the Battle of Chickamauga. On 19 March 1865 Lieutenant Colonel Anderson participated as assistant adjutant general in that army's last major battle, at Bentonville, North Carolina.

Tredegar Iron Works
Soon thereafter Anderson rejoined his father at the Tredegar Company and, along with other Tredegar officials, received a pardon from President Andrew Johnson in the fall of 1865 that enabled them to regain possession of the ironworks from the Union army. In 1866 and early in 1867 the General Assembly allowed the reincorporation of the Tredegar Company. Ten thousand shares were issued at $100 per share. Joseph Reid Anderson held 6,950 shares, while Archer Anderson had 500.

Early in 1867 Anderson was elected to the company's board and appointed its secretary and treasurer at an annual salary of $3,000. Only he and his father were empowered to sign contracts for the reorganized company, which prospered until the depression of 1873, when the failure of the New York and Oswego Midland Railroad and other companies indebted to Tredegar ultimately forced the ironwork's officers to declare it insolvent in 1876.

The corporation remained in receivership until 1879, but Joseph Reid Anderson had himself named receiver and led Tredegar out of bankruptcy, although he incurred a $1 million debt in the process. The debt was gradually reduced to $294,000 by January 1884. Dividend payments were reinstated in 1882 and maintained throughout the depression of 1893, though usually at only 2 percent.

A week after his father's death on 7 September 1892, Archer Anderson was elected Tredegar's president. Under his leadership the firm did not try to compete in steel but concentrated largely on proven iron products, such as spikes, rail fastenings, railroad-car wheels, and horseshoes. By 1903 artillery-shell production had been resumed, and in 1910 the stock dividend was increased from 5 to 7 percent. The outbreak of war in Europe in 1914 brought an even-bigger increase in profits, to nearly $300,000 in 1916, with the corporation declaring a 17 percent dividend. The next year total assets exceeded $2 million. While the corporation modernized by producing steel shells for the military and constructing a large shell foundry, it was in general conservatively operated in Anderson's last years. The bulk of the profits were used to pay down the small debt, to purchase other securities, and to increase the stockholders' dividends.

The company's profits also directly supported the Anderson children. Three sons held managerial positions at Tredegar, with Archer Anderson Jr. following his father as president of the firm. Their daughters included Mary Mason Anderson Williams, who was a preservationist and staunch opponent of woman suffrage, and Sarah "Sally" Archer Anderson, who played a prominent role in the Confederate Museum in Richmond. Her parents provided the inspiration, as both participated in Confederate memorial activities. Archer Anderson sponsored and attended veterans' reunions and delivered several orations on Confederate themes, the most notable being the principal address at the dedication of the Lee statue in Richmond on 29 May 1890. He encouraged remembrance of Confederate sacrifice and heroes, but he also looked forward to economic and industrial progress. Anderson was active in a variety of civic and veterans' organizations, including the Southern Historical Society, the Virginia Historical Society, and R. E. Lee Camp Number 1 of the United Confederate Veterans.

Archer Anderson died at his house in Richmond on 4 January 1918 after a short illness. Funeral services were held at Saint Paul's Episcopal Church, to which he had belonged for many years, and he was buried in the family plot at Hollywood Cemetery in Richmond.

Written for the Dictionary of Virginia Biography by R. Barry Westin.