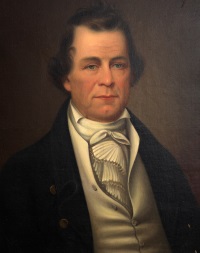 Briscoe Gerard Baldwin (4 January 1789–18 May 1852), attorney, member of the Convention of 1829–1830, and judge of the Virginia Court of Appeals, was the eldest of six sons and third of ten children of Winchester physician Cornelius Baldwin and Mary Briscoe Baldwin. He attended Winchester Academy and enrolled in the College of William and Mary in 1806, but shortly thereafter he accepted an offer from his brother-in-law William Daniel to read law in his Cumberland County office. Baldwin was admitted to the bar and established his practice in Staunton in 1809. In 1812 he married Martha Steele Brown, daughter of John Brown, the chancellor of the Staunton district, and they had three sons and three daughters. His eldest son was John Brown Baldwin, a member of the Confederate Congress and Speaker of the House of Delegates.

During the first half of the nineteenth century, Staunton was the most important legal center of western Virginia and boasted a talented bar. Baldwin, Chapman Johnson, Daniel Sheffey, and John Howe Peyton shared the most significant litigation in the courts of Staunton and the neighboring Valley counties. Alexander Hugh Holmes Stuart, himself later a star of the Valley bar, described Baldwin as "not only an able lawyer and skillful special pleader, but one of the most eloquent advocates of his day." Clients, petitioners, investors, and political candidates throughout western Virginia sought Baldwin's aid and advice, and his fame as one of the state's leading advocates spread rapidly. In 1835 he qualified to practice before the Virginia Court of Appeals and thereafter concentrated much of his practice in the appellate courts.

Baldwin served in the Virginia militia and by the 1830s was a brigadier general. He was inclined to stay out of politics, but he did represent Augusta County for three terms in the House of Delegates from 1818 to 1820 and 1822 to 1823. While in the assembly Baldwin supported internal improvements for the western counties and also tried to have the state capital moved to a more central location, preferably Staunton. He also served in the Convention of 1829–1830 and favored western proposals to alter the formula for apportioning seats in the General Assembly that had given an advantage to the small eastern counties at the expense of the large and increasingly populous western counties. Baldwin took the politically dangerous course of urging moderation, which may have alienated some of his more insistent constituents. Widely known as "a bold, and uncompromising man of honor," Baldwin did not display his talents to their best advantage in the convention.

In 1831 Baldwin launched an ambitious new venture. Knowing firsthand the limitations of reading law in an attorney's office, he opened a law school in Staunton, one of the first in the western part of the state. Chancellor Creed Taylor, of Cumberland County, and Judge Henry St. George Tucker, of Winchester, had both conducted law schools, and the College of William and Mary and the University of Virginia also had professors of law on their faculties. Baldwin's innovation was running a law school while still engaged in active practice. He divided his students into two classes, stressing elementary knowledge first, followed by intensive instruction in the practical areas of pleadings, procedure, and the general management of suits both at common law and in equity. The school's moot court program gave students practice in making arguments and being questioned in order to "guard against awkwardness and embarrassment, and fit the student for immediate usefulness." Baldwin conducted his school for approximately eight years.

In 1841 Baldwin was elected to the House of Delegates as a Whig, but he served only a few weeks because on 26 January 1842, after three days of highly partisan balloting, the General Assembly elected him to a seat on the Court of Appeals. Both Democrats and Whigs praised the compromise selection of Baldwin because he was a skilled attorney, and partisan politics had often dictated appointments. While serving on the bench Baldwin began compiling, through a careful reading of previous court decisions, a series of "maxims" (which was incomplete at the time of his death) that would "make surer for himself all the humanities and amenities of judicial and professional conduct." His strong commitment to the ideal of justice and to the elimination of obscurity in the pronouncement of law guided his most important decisions as a judge. In 1844 he clarified the issue of adversary possession of land, that is, under what circumstances a long and public occupation of a property conferred actual ownership of it on the person occupying it. In 1848 he repudiated from the bench the doctrine of fraud per se, which held that if a vendor retained possession of property after selling it, that created a presumption of fraud in the sale. Baldwin stated that application of the broad doctrine in many and varying cases had produced too many "perplexed and conflicting" judgments "abounding in nice disquisitions and subtle distinctions," producing "inextricable confusion" and rendering application of the doctrine "impracticable."

Baldwin served on the court for ten years. The Constitution of 1850 made the office of judge elective, and he declined being a candidate during the spring of 1852. Briscoe Gerard Baldwin died at his residence, Spring Farm, near Staunton on 18 May 1852.

Written for the Dictionary of Virginia Biography by E. Lee Shepard.