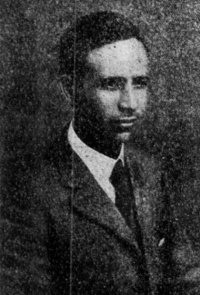 Walter Scott Banks (13 December 1885–17 October 1970), banker, was born in Goochland County, the elder of two sons and second of three children of Ella Jackson Banks. His ancestors included Goochland natives John Banks and Jacob Banks, free men of color and veterans of military service in the American Revolution. In 1893 his mother sent him to live with an uncle in York, Pennsylvania, where he could obtain a better education than Goochland County offered. The uncle, however, removed him from school in May 1896 and set him to work as a carter hauling dirt at a construction site. A family friend informed his mother of the boy's employment, and she immediately brought him back to Richmond, where she worked as a laundress. There he attended public schools until June 1900, when his formal education ended.

Banks went to work as a porter for a shoe store, delivering shoes to customers. He later recalled that his wages were $3.50 a week, but he told his mother that he earned only $3.00 and used the remainder to purchase texts on bookkeeping, which he studied in the evenings. Banks continued to educate himself in business practices while working as a uniformed elevator operator for a clothing store. He became the manager of the shoe department of the Black-owned Saint Luke Emporium on Broad Street in 1905, a post that gave him the security to marry Rebecca Murdaugh in Sussex County on 30 November 1905. After having one son and one daughter, they divorced sometime between 1907, when their daughter was born, and 23 December 1912, when Banks was married in Richmond to Geneva Thornhill, of Lynchburg. They had two sons and two daughters.

Banks became an agent for the Richmond Beneficial Insurance Company in 1906. Organized in 1894 by John Thomas Taylor, the company offered benefits in cases of accident, illness, and death, and grew from its initial capital of $200 into an institution with assets of more than $25,000 in 1906 and agencies across Virginia and the District of Columbia. Banks's work ethic and aptitude for business soon brought him to Taylor's attention, and the older man made Banks his protégé. In 1911, when the company's assets had grown to more than $44,000, Banks became the company's traveling superintendent, supervising agents outside Richmond. By 1920 assets amounted to almost $136,000. Banks meanwhile pursued further education through correspondence courses in accounting.

In 1920 Taylor organized Second Street Savings Bank and named Banks the new institution's cashier, or chief administrative officer. Professing to know nothing of bank operations, Banks quickly researched the subject. The bank opened on 23 October 1920, and its assets grew to almost $39,000 before the end of the year. In 1925 it reported assets of $184,471 and opened a branch office in South Richmond. Growth stalled at that point, and assets fell to $162,000 in 1929. The bank's difficulties mirrored worsening economic conditions in the Black community. Assets of the city's other banks owned by African Americans, Saint Luke Penny Savings Bank and the Commercial Bank and Trust Company, also declined after 1925.

In the aftermath of the stock market's collapse in October 1929, worried officers of these banks met to discuss merging into a single, more secure institution. On 2 January 1930 Second Street Bank and the larger Saint Luke Bank and Trust Company merged to become Consolidated Bank and Trust Company, with assets of more than $500,000. Maggie Lena Mitchell Walker, president of the Saint Luke bank, was named chairman of the board of the new bank, Emmett Carroll Burke became president, and Walter S. Banks became secretary-treasurer. In 1931 Consolidated Bank merged with Commercial Bank and Trust.

The merger enabled Consolidated Bank to survive the Great Depression. Because of the poverty of the African American community, the lack of support from banks and businesses controlled by whites, and the expense of handling numerous small accounts, successful Black-owned banks combined personal service to depositors with very conservative lending practices. African American bankers also believed that bank examiners tended to scrutinize their books especially closely, a perception that reinforced their fiscal conservatism. Banks's careful attention to detail and self-discipline—he strove to be the first to arrive and last to leave each workday—made him an effective manager of Consolidated Bank and Trust.

Burke retired in 1950, and Banks succeeded him as president. That decade's healthy economy enabled him to make Consolidated a "full service" bank. When he retired in 1958 at the age of seventy-three, the bank's assets exceeded $5.1 million, an increase during his presidency of 51 percent. Deposits increased nearly as much, but loans grew by 170 percent. Banks left a secure and modern financial institution to his successors.

In retirement Banks continued to sing in the choir and serve as a deacon at All Souls Presbyterian Church. He also served for several years on the advisory board of the Richmond Redevelopment and Housing Authority and was known in his community for quiet, private philanthropy. Widowed since 1954, Walter Scott Banks died of arteriosclerotic heart disease on 17 October 1970 and was buried at Woodland Cemetery.

Written for the Dictionary of Virginia Biography by John T. Kneebone.