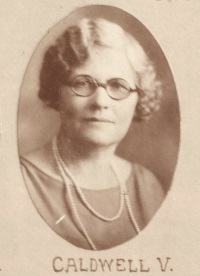 Nancy Melvina "Vinnie" Caldwell (4 August 1868–11 February 1956), member of the House of Delegates, was born in the town of Middlebrook in Augusta County, the daughter of John Barger Caldwell, a farmer, and Fannie Givens Caldwell, both natives of Craig County. When she was two years old her parents moved the family to Carroll County, onto land that later became part of the town of Galax. Caldwell attended the local public school and at her mother's urging took and passed an examination to become a teacher. Sometime in the 1880s she began teaching in the public schools in Carroll and Grayson Counties and attended a summer normal institute to obtain her teaching certificate. Caldwell also studied art briefly at Centenary College in Cleveland, Tennessee.

Miss Vinnie, as she came to be known, taught at a series of a dozen schools until late in the 1890s. Frustrated by her low salary and the difficulties of teaching in an impoverished rural school system, she learned to sew and worked for a time as a seamstress in Richmond. Caldwell then moved to Lynchburg, where she took a business course at a school and then taught there for two years. Later she found employment as a stenographer. About 1903 Caldwell became a traveling sales representative. Crisscrossing the South by train and canvassing small towns door-to-door, she spent several years demonstrating first medicine and then a dustless broom. For several years she lived in Florida. She returned to Galax by July 1916, when she joined a small group of women in establishing the Grayson County chapter of the Equal Suffrage League of Virginia, which had been founded seven years earlier to promote voting rights for women. By 1920 she was helping run the Bluemont Hotel, which her family then owned. Caldwell belonged to the Galax Music Club and the local chapter of the Business and Professional Women's Club. She also involved herself in welfare work in behalf of children and was instrumental in obtaining state assistance for a number of orphaned and physically handicapped youth and their families.

Caldwell probably became involved in local politics after women gained the right to vote in 1920. In 1927, under circumstances that are no longer clear, the Democratic Party in Carroll County nominated her for the county's seat in the House of Delegates. Although southwestern Virginia was a stronghold of the Republican Party and Republicans captured every other major office in the county that year, Caldwell defeated her opponent, Republican Humes L. Franklin, by a vote of 1,990 to 1,895. She joined Sallie Cook Booker, of Henry County, Sarah Lee Fain, of Norfolk, and Helen Ruth Henderson, of Buchanan County, as the only women in the General Assembly when it convened in January 1928. All four were current or former schoolteachers. Caldwell served on the Committees on Asylums and Prisons, on Manufactures and Mechanic Arts, and on Schools and Colleges.

Caldwell did not seek reelection in 1929 but maintained a keen interest in current events for the rest of her life. She devoted herself to welfare work in the Galax area and remained active in the community into her eighties. Her health began to decline early in the 1950s, and she became a semi-invalid confined to a wheelchair. Nancy Melvina "Vinnie" Caldwell died at her home in Galax on 11 February 1956 and was buried in the Caldwell-Givens family cemetery there.

Written for the Dictionary of Virginia Biography by Sandra Gioia Treadway.