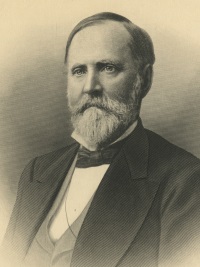 Isaac Davenport (1814–23 October 1896), entrepreneur, was born in Hallowell, Maine, and was the son of Benjamin Davenport, a merchant, and Sally Turner Davenport. About 1829 he moved to Richmond to work in the commission merchant business of his uncle Isaac Davenport (1792–1865). Known as Isaac Davenport Jr. for much of his life to distinguish him from his uncle, he joined Robert Edmond about 1834 in establishing a wholesale grocery and commission house called Edmond and Davenport. On 20 November 1844, in New Bedford, Massachusetts, Davenport married Eliza Nye Allen, of that town. Before she died on 24 October 1889, they had two sons and two daughters.

By the mid-1840s Edmond and Davenport, along with a new partner, had begun to operate packet boats and stage lines along the James River and Kanawha Canal. For more than a decade Boyd, Edmond, and Davenport transported goods, passengers, and mail between Richmond and Lynchburg and eventually as far west as the town of Buchanan. Early in the 1850s Edmond, Davenport and Company, as the commission house had become known, also developed interests in international shipping. Most imported and exported goods passed through northern ports before arriving in Richmond, and like other local merchants Davenport advocated improving the city's waterways and wharves in order to increase commerce. In 1853 the partners began shipping flour manufactured in Richmond to Brazil on their schooner, the Tennessee. On the ship's return in July with a cargo of coffee, a local newspaper praised the first direct international importation of that product to the city in years. During the next decade Edmond, Davenport and Company purchased additional vessels, sometimes in partnership with other local investors, and imported coffee, alcohol, salt, guano, and other goods to their warehouses on the Richmond docks.

Davenport invested in a variety of enterprises. In 1858 he helped incorporate the Old Dominion Iron and Nail Works. Two years later he incorporated the Old Dominion Insurance Company of Richmond, of which he became president, and also the short-lived Bank of Richmond. In 1861 he and a partner established Davenport and Company, an insurance agency for the Liverpool and London Fire and Life Insurance Company. Davenport managed the business during the Civil War while his partner served in the Confederate ambulance corps, and afterward the company invested in banks and businesses across the South. Davenport and Company continued to operate as an investment company into the twenty-first century.

During the Civil War both Confederate and Union forces occupied Edmond and Davenport's warehouses and wharf, and United States warships seized at least one of the company's ships and removed some of its cargo from another. Davenport joined Richmond's local militia as a second sergeant in the 1st Virginia State Reserves. When he applied for a presidential pardon in July 1865 (required because he owned property valued at more than $20,000), he stated that he had not held any Confederate military or civil office.

Intent on investing in Richmond's reconstruction after the war, Davenport became president of the recently established Union Bank of Richmond in 1866. He was serving as a director of the National Exchange Bank when the First National Bank of Richmond acquired it in 1867 and was elected president of First National in February 1869. During the next twenty-two years Davenport increased the bank's capital stock and shepherded it through difficult times, including the financial panic of 1873 when he chaired the committee that created a local clearing association to facilitate transactions among banks. Between 1870 and 1891, individual deposits at First National increased from $571,604 to more than $1.6 million. Until 1891 Davenport also remained president of Union Bank, which functioned as a savings and loan institution while First National focused on commercial banking. In 1873 he established another wholesale grocery business under the name Davenport and Morris. One of the city's largest wholesale grocers, it operated throughout the South by the 1890s and annually sold more than $1 million worth of imported coffee, molasses, sugar, beer, and other goods.

Eager to promote Richmond's business interests, Davenport served as a director of the city's Board of Trade during the 1850s and as a director and officer of its successor organization, the Chamber of Commerce. During the 1870s and 1880s he sat on the boards of numerous businesses in Richmond and elsewhere, including the Albemarle Paper Manufacturing Company (later Ethyl Corporation), Franklin Machine Company, Marshall Manufacturing Company, and the Old Dominion Steamship Company. In 1870 Davenport joined a group incorporating the Virginia and Northwestern Railroad Company. He also served as a director of the Richmond and Danville Railroad Company and of the Richmond and Petersburg Railroad Company. After the Chesapeake and Ohio Railroad Company was forced into receivership in 1875, Davenport was elected to the reorganization committee that purchased the Chesapeake and Ohio at auction in 1878 and then successfully restructured it as the Chesapeake and Ohio Railway.

A stroke Davenport suffered in April 1891 left him paralyzed. Early in June he resigned as president of First National Bank and withdrew from his other business affairs. Isaac Davenport died at his Richmond home on 23 October 1896 and was buried in Hollywood Cemetery.