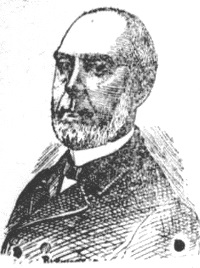 Henry Keeling Ellyson (31 July 1823–27 November 1890), Baptist lay leader and mayor of Richmond, was born in Richmond and was the son of Onan Ellyson, a wheelwright, and Jane Huot Ellyson. After serving an apprenticeship with a printer who published the Southern Churchman, an Episcopal periodical, Ellyson opened his own printing business in 1841 and joined Second Baptist Church, where he quickly became a lay leader and speaker in behalf of the temperance movement. He married Elizabeth Pinkney Barns, or Barnes, in Richmond on 22 June 1843. Of their four sons and three daughters, one son and two daughters died in childhood. Their second son, James Taylor Ellyson, served as lieutenant governor of Virginia from 1906 to 1918, and their fourth son, William Ellyson, succeeded his father to serve for almost thirty years as corresponding secretary of the State Mission Board of the Baptist General Association of Virginia.

From 1843 until his death Ellyson was superintendent of the Sunday school at Second Baptist Church. In 1844 the congregation elected him a delegate both to the Virginia Baptist Education Society and to the Foreign Baptist Bible Society. In 1847 he began forty-three years in the influential position of corresponding secretary of the Baptist General Association of Virginia. After a reorganization in 1854, Ellyson became corresponding secretary of the association's new State Mission Board. Responsible for missionary work within the state, he fostered the development of Baptist associations in the area of Virginia west of the Blue Ridge Mountains and became one of the most-respected Baptist lay leaders in the state. Ellyson was also interested in missions around the world and served on the board of managers of the Southern Baptist Convention's Foreign Mission Board (later International Mission Board) from 1846 until his death. He chaired the finance committee of the board of managers, whose members lived near Richmond and oversaw the work of the Foreign Mission Board. From 1846 to 1851, he published at his own expense the Southern Baptist Missionary Journal, the official organ for the mission boards of the Southern Baptist Convention. He served as a secretary of the Southern Baptist Convention in 1853 and as a vice president in 1882.

Ellyson won election to the House of Delegates in 1853 for the first of two terms representing Richmond. A member of the Whig minority, he sat on the comparatively inconsequential committees on the public armory and the state penitentiary during his first term. For the 1855–1856 assembly he joined the Committee of Claims and the joint committee to examine the Second Auditor's Office. Some Catholic voters in Richmond later accused him of bias against them, perhaps because he opposed the Democratic Party when the American Party, or Know Nothings, mounted a nativist campaign against Catholics and Democrats elsewhere in the country. From 1857 until 1865 Ellyson served as Richmond sheriff. Before the Civil War, he owned a few household slaves. He estimated the value of his real estate in 1860 at about $4,000 and the value of his personal property at $20,000. In 1865 he stated that he had opposed secession and did not vote in the elections for Confederate president.

Soon after the end of the war, Ellyson joined his former legislative colleague and Catholic friend, James Andrew Cowardin, to revive publication of the Richmond Daily Dispatch, the city's most influential newspaper. Cowardin was president and Ellyson secretary-treasurer of the paper until Cowardin died in 1882. Ellyson continued to publish the Dispatch afterward and prospered during the postwar years. He invested in and sat on the boards of directors of several profitable local and regional businesses, including banks, insurances companies, steamboat lines, and railroads. At his death his estate was worth approximately $130,000.

In 1869 the city council appointed Ellyson to the new city school board that created the city's first free public school system. He apparently accepted the creation of schools for African American students as the price for providing education for more white children. Ellyson helped found the Conservative Party in 1867 and was appointed to its state central committee in December of that year. Led primarily by former Whigs but including former Confederates and other white voters, its members governed Virginia during the 1870s and evolved during the 1880s into the Democratic Party.

After Virginia was readmitted to the United States early in 1870, the governor appointed a new Richmond City Council, including Ellyson, whom the council elected mayor on 16 March. The incumbent mayor, George Chahoon, refused to relinquish the office, and for several weeks Richmond had rival city governments. Each had its own officers and police department. Ellyson's police cut off the gaslights to the police station when Chahoon and his allies were inside, and street violence led to the deaths of two men. The rivals eventually agreed to allow the Virginia Supreme Court of Appeals to resolve the dispute. So many people crowded into the courtroom in the Capitol on 27 April 1870 that a gallery collapsed, killing about sixty people and injuring many more. Two days later the court ruled in favor of Ellyson, who in May won election as mayor by a narrow majority. After ballot boxes from the strongest Republican ward were stolen, however, Ellyson declined to serve because he had not been elected honorably.

Ellyson remained involved in civic life after his brief tenure as mayor. He urged the city government, with little success, to fund additional poor relief after the financial panic of 1873. He joined the board of Richmond College (later University of Richmond) in 1868 and eighteen years later became president of the board. Esteemed as a Richmond booster, he promoted the Virginia railway companies that during the 1870s came under the overall management of the Pennsylvania Railroad.

Ellyson's wife died of typhoid fever on 17 July 1886, after which he and his unmarried daughter lived with the family of one of his sons. Henry Keeling Ellyson died of heart disease in his son's Richmond home on 27 November 1890 and after a large funeral service at Second Baptist Church was buried in the city's Hollywood Cemetery.

Written for the Dictionary of Virginia Biography by Michael B. Chesson.