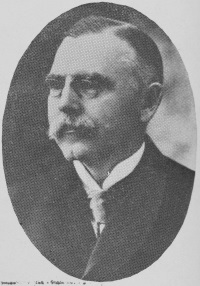 William Ellyson (24 May 1851–25 November 1919), Baptist lay leader, was born in Richmond and was the son of Elizabeth Pinkney Barns (or Barnes) Ellyson and Henry Keeling Ellyson, the longtime corresponding secretary of the Baptist General Association of Virginia. An elder brother, James Taylor Ellyson, also a prominent Baptist lay leader, served as lieutenant governor of Virginia from 1906 to 1918. Ellyson attended a local academy and worked in a grocery store and later as a collector for the Richmond Daily Dispatch, the newspaper his father co-owned and edited. He matriculated at Richmond College (later the University of Richmond) in 1871 and received an M.A. five years later after completing classes in all eight academic schools. Ellyson read law with a Richmond judge and by 1877 had established his own practice. Specializing in real estate law and title research, he operated the Richmond Title and Guarantee Company after 1900. He also invested in the Ohio and Western Oil Corporation, of which he served as president.

Following a religious awakening, Ellyson was baptized at Richmond's Second Baptist Church on 23 February 1870. An enthusiastic advocate for the church's mission work, he often spoke on that topic at summer revivals and at Sunday services throughout the state. Between 1883 and 1890 Ellyson won annual election as moderator of the Dover Baptist Association, composed of congregations in Richmond and neighboring counties. He also served as president of the Baptist Sunday School Association of Richmond and Manchester during the 1880s.

After his father died in November 1890, the Baptist General Association of Virginia elected Ellyson to fill his position as corresponding secretary of the State Mission Board. Functioning as the board's executive director for almost thirty years, Ellyson worked to increase funding for missionary work, especially in rural Virginia. When he began his tenure, the denomination had eighty-five missionary pastors around the state and a budget of about $13,000. Under Ellyson's leadership the board created a Volunteer Mission Movement, launched a Missionary Campaign, and hired a field secretary as well as traveling evangelists who spread the gospel across Virginia. In an effort to reach out to the state's black residents, the board began a cooperative effort with African American Baptists during the 1890s.

The State Mission Board took over the work of the Sunday School and Bible Board in 1909 and in the next decade established two mission schools in Buchanan and Patrick Counties. Enlisting the financial support of the Woman's Missionary Union, the Mission Board continued to expand its efforts to reach all parts of Virginia. By 1919 its budget of about $90,000 supported 118 missionary pastors and 6 state evangelists. During the last year of his life Ellyson directed the State Mission Board's efforts to raise $7 million as part of the Southern Baptist Convention's $75 Million Campaign begun in 1919 to fund missions and educational institutions.

In January 1891 Ellyson took his father's seat on the board of managers of the Southern Baptist Convention's Foreign Mission Board (later the International Mission Board). Consisting of members who lived in the vicinity of Richmond, the board of managers met regularly to oversee the work of the Foreign Mission Board. Between 1895 and 1920 the number of missionaries in the field increased from 81 to 341, while the budget grew dramatically from $129,000 to more than $2.1 million. Ellyson, who also acted as the board's legal counsel, never accepted any remuneration for his work. During much of his twenty-eight-year tenure, he sat on the Committee on Mexico, which directed the mission work in that country. From 1903 to 1916 he also sat on the Ways and Means Committee.

On 3 February 1916 the Foreign Mission Board elected Ellyson president of the board of managers to complete the term of his predecessor, who had resigned because of poor health. He won a full one-year term on 14 June 1916 and was reelected in 1917, 1918, and 1919. In November 1905 Ellyson began the first of two one-year terms as president of the Baptist General Association of Virginia. He attended annual meetings of the Southern Baptist Convention and served as a vice president in 1910 and again in 1913. After World War I, Southern Baptists wanted to expand lines of communication with Baptists around the world. At the SBC meeting in May 1919 Ellyson joined a special committee charged with composing Fraternal Greetings to Baptists of the World. The resulting Fraternal Address served as a statement of fundamental Baptist beliefs to draw members of the faith together.

Ellyson married Mary M. "Mollie" Johnson in Louisa County on 12 October 1887. A Baptist lay leader in her own right, she worked for fourteen years as treasurer and for sixteen years as auditor of what became the Woman's Missionary Union of Virginia. They had two daughters, both of whom served as missionaries in China, and two sons. Having suffered from kidney disease for the last few years of his life, William Ellyson died of chronic interstitial nephritis at his Richmond home on 25 November 1919. He was buried in Hollywood Cemetery. An editorial tribute hailed him as the "ideal layman," and the State Mission Board later erected a monument at his gravesite.