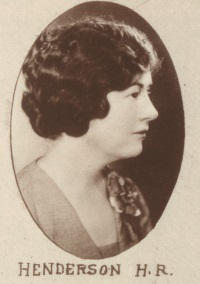 Helen Ruth Henderson (9 November 1898–20 February 1982), educator and member of the House of Delegates, was born in Jefferson City, Tennessee, and was the daughter of Robert Anderson Henderson and Helen Moore Timmons Henderson, one of the first two women elected to the Virginia House of Delegates. The family moved to Southampton County, Virginia, about 1907 and then to the small town of Council, in Buchanan County, in 1911. In this remote mountainous part of the state her parents operated a school recently established by the Baptist General Association of Virginia's State Mission Board and funded by the Woman's Missionary Union of Virginia. Inspired to a career in education, Henderson attended Virginia Intermont College early in the 1910s and later enrolled at Westhampton College (later part of the University of Richmond), from which she graduated with a B.A. in June 1921. Henderson returned to Buchanan County, where she taught at a one-room public school and then at her parents' school, known variously as the Buchanan Baptist Mission School and the Buchanan Mission School.

Henderson, whose name was sometimes styled as Ruth Henderson or H. Ruth Henderson, became a field secretary for the Co-Operative Education Association of Virginia in 1924. With her office in Radford, she organized community leagues in almost two dozen counties in southwestern Virginia to help improve local schools. The leagues did everything from digging wells and making repairs to buying books and other supplies. Her mother died in July 1925 and Henderson left the association to replace her as assistant principal of the mission school led by her father.

In 1927 the local Democratic Party drafted Henderson as a candidate for a seat in the House of Delegates representing the flotorial district of Buchanan and Russell Counties, the same seat her mother had held during the 1924 session. Unopposed, she won election on 8 November with 4,903 votes from Russell and 3,618 from Buchanan. Henderson was one of four women in the House of Delegates during the session, which met from 11 January to 19 March 1928. While not garnering the same attention as her mother and Sarah Lee Odend'hal Fain had before them, Henderson and her three female colleagues, Sallie Cook Booker, Nancy Melvina Caldwell, and Fain, were still something of a phenomenon and generated great interest. In addition to wide press coverage, they were in demand as speakers at women's groups and auxiliaries throughout Richmond. Henderson sat on the Committees on Schools and Colleges, on Roads and Internal Navigation, and on Enrolled Bills. In February she submitted a proposal to extend certain protections for fish and game in Buchanan County. The following month she was appointed to a joint conference committee to develop compromise language on a bill revising laws that regulated the schools and the State Board of Education. She did not run for reelection in 1929.

On the final day of the session Henderson was appointed to a nine-member legislative commission charged with evaluating a proposal to establish a liberal arts college for women. She joined the commission in recommending in 1932 that the teachers' college in Fredericksburg be transformed into a women's liberal arts college, but the governor vetoed the subsequent legislation. She sat on the Co-Operative Education Association's board of directors beginning in January 1928. That October, after returning to work at the mission school, she attended a conference in Richmond sponsored by the Southern Woman's Educational Alliance that examined the educational needs of rural girls.

Henderson joined the staff of the Virginia Department of Education in 1931 as assistant supervisor of elementary education, later becoming state supervisor. She campaigned to fight illiteracy among children and adults, especially among whites, which was much higher than the national average. Henderson and her fellow state supervisor traveled across the state visiting classrooms, meeting with teachers and superintendents, speaking to groups, and participating in state and regional educational conferences. During the decade she also helped develop a new curriculum for elementary education. As state supervisor she was an active force for advancing the prominence of elementary education throughout Virginia, promoting teacher development, and trusting local school personnel to initiate implementation of new techniques. She was noted for using her wit to defuse problems and her readiness to advise when called on. Continuing her own studies, Henderson earned a master's degree in 1931 and a doctorate in 1937 from Columbia University, publishing her work that year as A Curriculum Study in a Mountain District. Inspired by her experiences as a pupil, teacher, and administrator in Council, she sought to adjust the curriculum and instructional methods to meet the needs of the students in an underserved part of Virginia.

Henderson was granted a leave of absence in 1942 to help develop a federal program sponsored by several government agencies to provide child care for mothers who went to work as part of wartime military production. On her recommendation Virginia governor Colgate Whitehead Darden established a state child care committee to qualify for certain federal funds. In June 1943 she testified before the United States Senate Committee on Education and Labor about Virginia's successes and problems in setting up child care programs and urged support for increased federal funding.

Recognized nationally for her expertise in the field of education, in March 1943 Henderson was elected the first president of the newly organized Department of Supervision and Curriculum Development, National Education Association (later Association for Supervision and Curriculum Development). In April 1944 she left her post as state supervisor of elementary education for a position as personnel director at the Tennessee Eastman Corporation, a chemical company in Kingsport, Tennessee. Two years later she moved to New York to work for the Girl Scouts of the United States of America, first as executive secretary and later as director of its international division. Charged with developing closer relationships with other international groups, she served as the liaison between the organization and the World Association of Girl Guides and Girl Scouts. When flying home in September 1946 from scouting meetings in Europe, the airplane she was on crashed in Newfoundland, Canada. She was one of eighteen survivors out of forty-four passengers.

In 1951 Henderson was reported to be under consideration for the post of president of Radford College (later Radford University). In June 1964 the Westhampton College alumnae association honored her and ten other graduates from the school's first decade for their distinguished achievements. Helen Ruth Henderson died at a nursing home on 20 February 1982 in Knoxville, Tennessee. She was buried in Westview Cemetery in Jefferson City.