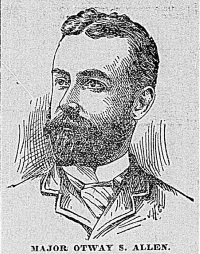 Otway Slaughter Allen (8 April 1851–17 February 1911), real estate developer and member of the Convention of 1901–1902, was born in Richmond, the youngest of three daughters and two sons of William C. Allen and Allaville Slaughter Allen. His father had begun his career as an apprentice bricklayer, but during the accelerated growth of Richmond in the 1830s and 1840s he became one of the city's most prosperous building contractors and developers. Before retiring from business in the 1850s William Allen had amassed many lots, including the fifty-eight-acre site that later became known as the Allen Addition, from which Monument Avenue developed. His landholdings, valued at $275,000 in 1860, constituted much of the substantial inheritance he left his children.

Otway Allen graduated from Virginia Military Institute in 1873 and returned to Richmond. His brother had not survived childhood, and after his father died in 1874 Allen devoted much of his attention to a model farm in the Allen Addition. In 1881 he joined with Charles G. Shafer to form Allen and Shafer Commission Merchants. That partnership was evidently amicably dissolved in 1888, and Allen continued thereafter as a successful investor who was described as a "capitalist" in city directories. He served as president of the Richmond Standard Spike and Iron Company in 1895 and 1896 but retired from business about 1900. Allen also belonged to Saint Paul's Episcopal Church, the Commonwealth Club, the Westmoreland Club, the Deep Run Hunt Club, the Richmond Boat Club, the Richmond German Club, and the Richmond Chamber of Commerce. He served as captain of the Stuart Horse Guards, a Richmond militia company, from 25 February 1885 to 15 April 1886 and major of the 1st Cavalry Battalion until November 1888.

On 1 February 1888 Allen married Mary McDonald, the daughter of James McDonald, the adjutant general of Virginia. They had no children and lived in the fashionable house Allen's father had built at 17 North Sixth Street. In an 1886 newspaper article, Allen became the first to suggest that a boulevard modeled on Baltimore's Mount Vernon Place be developed as the setting for an equestrian monument to Robert E. Lee, using the Allen Addition lot as a starting point. A year later he and his sisters donated to the city the land on which the Lee statue was unveiled in May 1890 at what is now in the intersection of Monument and Allen Avenues. His family's contribution of land for the Lee statue helped Allen cement his ties to the city and become a suburban developer. Entering local politics early in the 1890s, Allen was elected an alderman from Madison Ward in 1892 and held the office until 1904 and again in 1906, sitting on the important committees of finance and streets and serving as chairman of the latter.

After Virginius Newton resigned midway through the Convention of 1901–1902, Allen concluded a lackluster campaign to succeed him by easily defeating fellow Democrat A. Sidney Lanier on 3 December 1901. Allen was sworn in two days later and was appointed to the Committees on the Organization and Government of Cities and Towns, on Agricultural, Manufacturing, and Industrial Interests, and on Immigration. He did not participate in debates so far as the convention records show, and his committee work is not documented. On 4 April 1902 he voted with the majority in favor of restrictive voter registration requirements designed to reduce the number of black voters, but on 29 May he sided with the minority that favored submitting the constitution to the electorate.

Otway Slaughter Allen died from complications of Bright's disease on 17 February 1911 and was buried in Hollywood Cemetery.