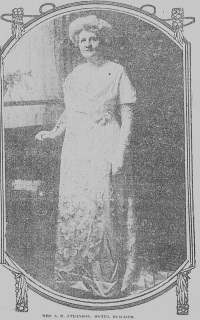 Adeline Detroit Wood Atkinson (30 July 1841–11 or 12 December 1916), hotelier and businesswoman, was born in Bedford County, probably the eldest of at least one son and two daughters of William Wood and Sarah Ann White Wood. On 17 September 1860, at the age of nineteen, she married thirty-two-year-old John M. Atkinson and eleven months later gave birth to the first of their three sons and three daughters. When the Civil War began John Atkinson enlisted in Company E of the 11th Virginia Infantry in Lynchburg, and the young couple settled there following his parole at Appomattox in April 1865. By the mid-1870s his income as a bricklayer was insufficient for the growing family and she began taking in boarders. By 1881 her business had become so successful that she opened the Warwick House hotel at a rented twenty-two-room building on Main Street.

The sole support of her family by the 1880s due to her husband's declining health, Atkinson decided to relocate in Richmond, where in 1884 she undertook the management of the financially troubled Saint James Hotel. She soon placed the Saint James on solid footing and in 1889 assumed proprietorship of the American Hotel, which she renamed the Lexington in 1894. Located at Twelfth and Main Streets in the heart of Richmond's financial district, the Lexington Hotel prospered, and within ten years Atkinson had saved enough money to build her own establishment. She purchased and demolished the Saint Clair Hotel, at the corner of Ninth and Grace Streets, and in its place built the Hotel Richmond, a 140-room structure. After it opened on 4 April 1904 a contemporary guidebook described it as "one of the most elegantly situated hotels in the city." Located at the western edge of Capitol Square and equipped with the latest conveniences, the Hotel Richmond ranked just below the famous Jefferson in reputation and popularity. The hotel did so well that in 1912 Atkinson doubled its capacity with a $400,000 addition, and four years later her property was estimated to be worth almost $1,000,000. Hotel Richmond flourished for many years and in 1966 the state acquired it for use as an office building. Threatened with demolition in 2005, the building was placed on the Virginia Landmarks Register and National Register for Historic Places in 2009 and restored in 2016 to again house state employees.

A.D. Atkinson, as she was professionally known, brought her sons into the management but remained in charge of the Hotel Richmond until her health failed in the fall of 1916. Observers credited her success to the close personal attention she gave to all aspects of her business, including shopping in person at local markets for hotel supplies. She was one of Richmond's most prominent and visible businesswomen, and many community and women's organizations sought her advice and support. She declined active membership in any clubs or associations, however, and affiliated formally only with the Second Presbyterian Church.

Adeline Detroit Wood Atkinson died of cancer at the Hotel Richmond at about midnight during the night of 11–12 December 1916. She was buried in the family plot next to her husband, who had died on 6 November 1894, in the city's Hollywood Cemetery.

Written for the Dictionary of Virginia Biography by Sandra Gioia Treadway.