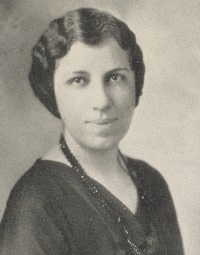 John-Geline MacDonald Bowman (30 March 1890–14 April 1946), business executive and president of the National Federation of Business and Professional Women's Clubs, was born in Atlanta, Georgia, the daughter of John Angus MacDonald and his second wife, Rowena Winter Thompson MacDonald. Her father, a native of Canada and a member of the publishing firm of N. D. MacDonald and Company, died when she was little more than a month old. She and her mother moved to Richmond to live with her mother's elder half sister John-Geline Woolfolk Binford. Binford's husband, Thomas Mayo Binford, was a businessman who died in 1902.

Early Years
Geline MacDonald grew up in the Richmond household of her aunt and mother, attended local schools, and then entered the Academy of the Holy Cross in Washington, D.C. She graduated in 1909 with special training in voice, piano, and the harp, returned to Richmond, and became a professional singer, performing in churches. A charter member of the Musicians' Club of Richmond, she sang at the annual members' recital in 1918. On 29 October 1913 she married Jacob Killian Bowman, a Richmond businessman and son of Alpheus Michael Bowman, a prominent state legislator from Salem. Their twin son and daughter were born in 1924.

Before World War I Bowman joined a network of Richmond women with a special interest in economic and educational opportunities. In 1914 she helped to establish the Virginia Bureau of Vocations for Women (later the Alliance for Guidance of Rural Youth) and served as its treasurer for many years. In the spring of 1917 the local chapter of the Young Women's Christian Association created a Business Women's Club, and Bowman became a leader in its campaigns to sell Liberty Bonds and War Savings Stamps. She became a talented public speaker and reportedly sold more thrift stamps than any other woman in the state.

Business Executive
Bowman's efforts brought her to the attention of Thomas McAdams, a banker who hired her after the war to head the new women's department of Merchants National Bank. She used direct-mail advertising to attract female customers to the bank. In 1922 the owner of the Expert Letter Writing Company, a local producer of such advertising, invited Bowman to manage the firm. She agreed to a trial but continued to give the bank half of her time. After six months Bowman resigned from the bank and in 1923 purchased the company. She had continued her singing career at Sunday church services until early in the 1920s, but operating the Expert Letter Writing Company and her growing organizational responsibilities ultimately left her no time for professional singing.

An active president, Bowman estimated that she devoted 90 percent of her working time to the federation. She traveled widely, spoke often, made radio broadcasts, and wrote magazine articles, all in the interest of opening business and professional opportunities for women. The Great Depression threatened the position of working women as states and localities attempted to curtail government employment of married women, supposedly to reserve jobs for family men. Bowman forcefully protested this practice at the federation's 1935 meeting and helped to thwart proposed restrictions on federal employment of married women. At that meeting, despite her reluctance to serve a third term as president of the National Federation of Business and Professional Women's Clubs, she accepted renomination but was defeated by fourteen votes.

Bowman's work for the federation had involved her with political issues, but she had long shared with her husband an active interest in the Democratic Party. In 1936 she was a Virginia delegate to the party's national convention and made campaign speeches in behalf of Franklin Delano Roosevelt, including one to an unfriendly audience on Wall Street in New York City. In 1938 Bowman unsuccessfully sought appointment as postmaster of Richmond.

Later Years
Bowman continued to operate the Expert Letter Writing Corporation, which had become one of the largest such enterprises in the South. She also served a number of civic organizations in Richmond and helped to found the Richmond Symphony Orchestra. For many years Bowman sat on the board of the Southern Woman's Educational Alliance, which became the Alliance for Guidance of Rural Youth. She supported improved educational opportunities for women, including their admission to the College of William and Mary. Bowman campaigned for Roosevelt again in 1940, and during World War II she served on the speakers' bureau of the war fund drives. Her son, Jay Killian Bowman, was shot down over Germany while flying in the Army Air Corps on 14 January 1945 and killed in action.

By then Bowman was undergoing treatment for breast cancer. She displayed great courage as the family waited for confirmation of the young man's fate. John-Geline MacDonald Bowman died in Richmond on 14 April 1946 and was buried in Hollywood Cemetery in that city. In 1961 her formal portrait was unveiled at the headquarters of the National Federation of Business and Professional Women's Clubs in Washington, D.C. Her daughter, Geline Bowman Williams, served as mayor of Richmond from 1988 to 1990.

Written for the Dictionary of Virginia Biography by Suzanne H. Freeman and John T. Kneebone.