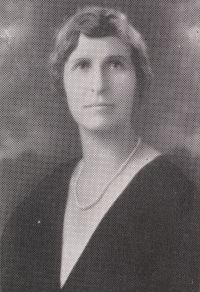 Dorothea Dutcher Buck (31 July 1887–9 May 1983), president of the General Federation of Women's Clubs, was born in Milwaukee, Wisconsin, the daughter of socially prominent parents, Pierpont Edwards Dutcher, a banker, and Fanny Louise Bull Dutcher. She attended Briarcliff College in Briarcliff Manor, New York, and a private school in Florence, Italy. She studied briefly at Milwaukee-Downer College (later Lawrence University) and pursued interests in painting and portraiture at the Art Students' League in New York.

After her marriage to James Lawrence Blair Buck in Magnolia, near Gloucester, Massachusetts, on 19 September 1914, she moved to Hampton, where her husband served on the faculty at Hampton Normal and Agricultural Institute (later Hampton University). They had one son and two daughters. Mrs. J. L. Blair Buck, as she usually gave her name, began her long career in public service and volunteerism by organizing a series of canteens during World War I. In 1926 she became the first president of the Woman's Club of Hampton. Buck later enjoyed recalling that she arrived after the start of the first meeting, took the only available seat, which was in the front row, and because of the prominence of her entrance was elected president.

In 1930 the Bucks moved to Richmond, where she joined the Richmond Woman's Club, the Ginter Park Woman's Club, and the Tuckahoe Woman's Club. Her organizational abilities at the local club level led to her election that year as president of the Virginia Federation of Women's Clubs. Buck served from 1930 to 1932. During these worst years of the Great Depression, the state federation worked for unemployment relief and thrift programs in the local club communities. Buck also served as the Virginia director of the national General Federation of Women's Clubs and in 1933 moved into its leadership after chairing the arrangements committee for the federation's meeting in Richmond. She was defeated in a three-way race for recording secretary in 1935 but was elected chair of the budget (1935–1938), treasurer (1938–1941), second vice president (1941–1944), and first vice president (1944–1947).

Buck's service to the General Federation of Women's Clubs culminated in her term as president from 1947 to 1950. The first Virginian to hold that office, she promoted a program of building world peace and advocated support of the United Nations. To honor her lobbying for the Marshall Plan, Secretary of State George Catlett Marshall attended the 1948 GFWC convention. Buck participated in the Town Hall World Seminar tour in 1949 and spoke in several countries on the need for building world peace. She also emphasized the work that local clubs could do to better their communities. Buck's administration initiated a continuing nationwide project of the federation, the Build a Better Community Program, which she considered her greatest accomplishment. She also strongly supported the federation's America Home and Youth Conservation Programs. President Harry S. Truman appointed Buck to the Citizens' Food Committee. During her term as president of the federation, she represented it on more than thirty national boards and traveled to China, Cuba, Denmark, Egypt, France, Great Britain, Greece, India, Japan, Korea, the Philippines, and Turkey on official federation business.

After her term concluded, Buck resumed her many civic activities in Richmond, which included membership in the Richmond chapter of the American Red Cross, the Richmond Theatre Guild, and the Virginia League for Planned Parenthood. Briefly in 1951 she worked for the Federal Civil Defense Agency as the regional director of women's activities. Buck was a member of the Virginia Democrats for Eisenhower in 1952 and in 1954 was elected president of the Virginia United Nations Association. From 1954 to 1956 she chaired the Virginia Centennial Committee of the Young Women's Christian Association.

Buck possessed many qualities that made her a natural leader. She had sensitivity, balanced judgment, and the ability to designate the appropriate person for each job. Buck's home was always open to visitors, and she was a brilliant conversationalist. She enjoyed many outdoor activities and sports including golf, sailing, swimming, and tennis. A woman of deep convictions, Buck and her husband moved their membership from Richmond's Grace Covenant Presbyterian Church to the new Saint Giles' Presbyterian Church in 1957 when Grace Covenant's congregation split as a result of the heavy participation of its pastor, John Blanton Belk, in the Moral Re-Armament movement. The Bucks supported Belk and were charter members of the new church, and she was elected its first woman elder after her husband's death on 16 March 1964.

Buck pursued her many artistic, church, civic, family, and world interests until 1979, when failing health prompted her to move to a nursing facility in Chester, Connecticut, near the home of one of her daughters. Dorothea Dutcher Buck died there on 9 May 1983 and was buried beside the ashes of her husband in Washington Cemetery in Washington, Connecticut.

Written for the Dictionary of Virginia Biography by Lisa C. Mangiafico.