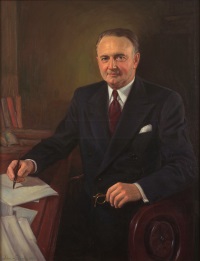 Harry Flood Byrd (10 June 1887–20 October 1966), governor of Virginia and member of the United States Senate, was born in Martinsburg, West Virginia, the eldest son of Richard Evelyn Byrd (1860–1925) and Eleanor Bolling Flood Byrd, of Winchester. His brothers were Richard Evelyn Byrd (1888–1957), who gained fame as a polar aviator and explorer, and Thomas Bolling Byrd (1890–1968), a lawyer who became Harry Byrd's partner in the apple business. Byrd inherited a strong political lineage. His grandfather Joel Flood served in the General Assembly, and his uncle Henry DeLaWarr "Hal" Flood sat in the House of Representatives for twenty years. Eleanor Byrd's grandfather Charles James Faulkner (1806–1884) was a member of the Convention of 1850–1851, a congressman, and ambassador to France, and his namesake son (1847–1929) represented West Virginia in the United States Senate. Harry Byrd's father, a descendant of the three William Byrds of colonial Virginia, became a noted attorney, served as Speaker of the House of Delegates, and was influential in the dominant wing of the Virginia Democratic Party.

Early Career
The trio of Tom, Dick, and Harry Byrd led the "western gang" on the west side of Winchester, where they grew up. Harry Byrd soon tired of formal education and at age fifteen took over the failing family newspaper. Possessing an indefatigable energy and valuing hard work and thrift, he made the Winchester Evening Star a profitable business. Byrd bought a second newspaper and started a third, leased some apple orchards, and from 1908 to 1918 was president of the Valley Turnpike Company, which operated the toll road between Winchester and Staunton. With the profits from these ventures he purchased orchards and apple cold-storage facilities and built them into a multimillion-dollar business that brought him financial security and a national reputation as an orchardist.

Before World War I Byrd started a family and began a political career. On 7 October 1913 he married Anne Douglas Beverley, of Winchester. They had three sons and one daughter. Tutored by his father in the intricacies of Virginia politics, Byrd served an appointed term on Winchester's city council starting in 1909 but lost an electoral bid for the same post the next year. In 1916 he began ten years of service in the Senate of Virginia, representing Frederick and Shenandoah Counties, Winchester, and (from 1924) Clarke County. More a behind-the-scenes manipulator than a legislative orator or draftsman, Byrd served on committees dealing with highways and finance, interests that typified his political career thereafter. During World War I he also served as state fuel administrator.

State Democratic Party Leader
The death of Hal Flood in December 1921 propelled Byrd into a leadership position in the state Democratic Party. Elected state party chairman the next year, he reduced the party debt, mended political fences around the state, and led a battle against the highway bond issue in 1923 that solidified his control of the party organization. Outflanking Governor Elbert Lee Trinkle, his principal rival for party leadership, Byrd advocated a pay-as-you-go plan for building roads, financed by gasoline taxes rather than bonds. He prepared for the campaign in the same diligent and organized fashion he used in all of his political races. The result was an overwhelming victory for him and his antibond forces that confirmed pay-as-you-go as the fiscal policy of Virginia for the next forty years.

Governor
Defeating G. Walter Mapp in the party primary and Republican S. Harris Hoge in the general election, Byrd was elected governor of Virginia in 1925 and was sworn into office on 1 February 1926. Despite his reputation as an organization stalwart, Byrd brought a level of activism, competence, imagination, and leadership to the office not witnessed in generations. Relying on his experience in politics and business, he sought to transform the government of Virginia into a lean and efficient provider of services by reorganizing offices and departments and restructuring state finances. Byrd commissioned a survey of the state government by the New York Bureau of Municipal Research, appointed a citizens' committee headed by his friend and mentor William Thomas Reed, and asked a constitutional commission to recommend changes in the basic law.

The major reorganization that resulted reduced the number of elected state officers from ten to three, abolished many state agencies, and consolidated the others into twelve departments. Along with a new system of accounting, these changes modernized the state government into something like a corporation with a fully empowered business executive at its head. Byrd sponsored a tax program that allocated real estate and personal property taxes to localities and left most other taxes for the state to collect. He also sought to increase the gasoline tax for highway construction and reduce the taxes on capital used in industry and on bonds and notes, hoping thereby to attract more industry and investment to Virginia.

Thanks primarily to Byrd's political skills, his proposals all won easy approval from the General Assembly and the electorate. His friends on Reed's committee tailored the proposals of the Bureau of Municipal Research to suit the governor, and the constitutional commission endorsed all of his suggested amendments. The 1926 and 1928 regular sessions of the assembly and a special session in 1927 rubber-stamped his handiwork and speedily passed the amendments on to a public referendum in June 1928. Leaving nothing to chance, Byrd campaigned vigorously for the proposed reforms, all of which the voters approved, albeit with less ardor than the politicians had demonstrated.

Although political considerations ruled out any serious changes in the notorious fee system by which county officers were compensated and in the structure of county government—both areas where Byrd rejected suggestions by the Bureau of Municipal Research—the governor established a solid record for progressive government. Sustained by the prosperity of the 1920s, his Program of Progress attracted new industries and residents, increased tourism, and left a state surplus exceeding $4 million when his term ended. He supported the creation of Shenandoah National Park and encouraged the restoration of colonial Williamsburg with money supplied by John D. Rockefeller Jr. Byrd was the commonwealth's number one booster and traveled across the state, often by airplane or blimp, to promote roads, tourism, and airport development. He also supported increased appropriations for education, although with less enthusiasm than he gave to highway construction. By blustering when industries increased gasoline prices and telephone rates, Byrd won acclaim as a populist fighting for the ordinary citizen, a reputation strengthened by his advocacy of a strong antilynching bill passed by the legislature in 1928. His governorship reflected the southern business progressivism of the 1920s that emphasized economy and efficiency rather than upgraded services, but even that was no small achievement.

In 1930 Byrd retired to his orchards and Rosemont, his large new house outside Berryville. He was still an energetic young man with a long political career ahead of him. Stockily built, with thinning, sandy hair above the high forehead typical of his family and a cherubic face that belied his maturity but confirmed his youthful vigor, Byrd enjoyed hiking and hunting in the Blue Ridge Mountains and directing work in his orchards. The apple business consumed most of his time, but he kept up his interest in politics. Relying on Richmond friends, especially Reed and Everett Randolph "Ebbie" Combs, Byrd maintained his influence on public affairs in the state. He advised his successor, John Garland Pollard, on necessary fiscal steps to combat the Great Depression, including support for the 1932 Byrd road law that turned county roads over to the state.

Encouraged by Virginians and conservative Democrats elsewhere who were intent on preventing Franklin Delano Roosevelt from becoming president, Byrd undertook an unsuccessful favorite-son presidential campaign in 1932. That was as close as he ever came to the presidency, but he ran a modest protest campaign against Roosevelt in 1944 and received fifteen electoral votes in 1960 from disaffected southern members of the electoral college who chose not to support their parties' nominees.

United States Senate
In March 1933 the governor appointed Byrd to the United States Senate to succeed Claude Augustus Swanson when the latter became secretary of the navy. Reelected by overwhelming margins six times, Byrd became a national spokesman for reduced federal spending, balanced budgets, and states' rights. During more than thirty years in Washington, Byrd adhered to a nineteenth-century Jeffersonian philosophy that favored a laissez-faire political and economic order in which government was unobtrusive and debt-free, state and local interests were protected from federal action, and the individual was at liberty to develop his own potential—a viewpoint that put him at odds with much of rapidly changing American society.

After briefly supporting Roosevelt's efforts to tackle the Great Depression, Byrd became a vociferous critic of the New Deal. He joined a conservative coalition of congressmen fighting government spending and regulation. Byrd's Senate record thereafter was remarkably consistent and negative. He compiled a strong antilabor record by voting against the Wagner National Labor Relations Act giving federal protection to the unionization of workers and for the Smith-Connally War Labor Disputes and Taft-Hartley Acts that restricted union power and activity. Byrd opposed most of the social reforms introduced during his career, and no significant legislation bears his name.

In foreign affairs Byrd was not an isolationist, but his penny-pinching led him to vote against most postwar foreign aid legislation, including the Marshall Plan. Advocating a strong national defense, he strongly criticized delays in Roosevelt's rearmament program before World War II, but once America entered the war Byrd became preoccupied with the growth of the federal government. He insisted on the creation of the Joint Committee on Reduction of Nonessential Federal Expenditures, and under his chairmanship for twenty-four years its reports ridiculed bloated bureaucracy.

By the 1950s Byrd had assumed the role of an elder statesman. He chaired the important Senate Committee on Finance starting in 1955 and won respect for his courage, integrity, and courtliness. Byrd had achieved national prominence as the spokesman for an outdated but still coveted way of life. He became the idol of the conservative business community, and his numerous magazine articles widely disseminated his political ideas. But his positions, particularly on civil rights, alienated him from the increasingly liberal national Democratic Party, and after 1944 he never again endorsed his party's presidential nominee but preferred instead to maintain what he called a "golden silence."

Massive Resistance
All the while Byrd controlled political events in Virginia. He helped to select its governors, advised them on legislation, and kept the state committed to a pay-as-you-go policy and honest but parsimonious government. As depression and war changed the nature of the commonwealth, however, Byrd found it increasingly difficult to retain his grip. Antiorganization Democrats and "Young Turks," dissidents within the machine, joined with Republicans in criticizing his failure to confront contemporary issues. None was more important than civil rights. Faced with the United States Supreme Court's desegregation decision of 1954, Byrd pushed the state down the road of Massive Resistance and school closings—an embarrassing chapter with which to close a long career of dedicated public service. The eventual defeat of Virginia's Massive Resistance program in the General Assembly as well as in the courts foreshadowed the end of the old politics in Virginia and the capacity of leaders of his generation to direct the course of state politics.

Byrd spent his final years unsuccessfully combating the tax policies, civil rights legislation, and social programs of Presidents John F. Kennedy and Lyndon B. Johnson. His invalid wife died on 25 August 1964, and on 11 November 1965, undoubtedly feeling the effects of a brain tumor, he retired from the United States Senate. His eldest son, Harry Flood Byrd Jr. (1914–2013), succeeded him. Harry Flood Byrd died on 20 October 1966 at his beloved home, Rosemont. He was buried in Mount Hebron Cemetery in Winchester. In 1976 a statue of Byrd was erected at private expense in Capitol Square in Richmond.

Written for the Dictionary of Virginia Biography by Ronald L. Heinemann.