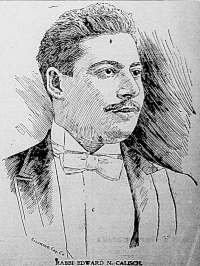 Edward Nathan Calisch (23 June 1865–7 January 1946), rabbi, was born in Toledo, Ohio, the son of Hartog (Henry) Salomon Calisch, a language instructor, and Rebecca van Noorden Calisch, both of whom immigrated to the United States from the Netherlands in 1856. Calisch spent his boyhood in Chicago, where the great fire of 1871 wiped out the family's possessions. A few years later his father died. At age ten Calisch went to work as a cash boy in a department store, but the meager wages that he and his elder brother earned could not support the family. In 1876 his impoverished mother placed him in a Jewish orphanage in Cleveland. There Calisch excelled in his studies, especially in oratory. In 1879 he attracted the notice of Isaac Mayer Wise, an early advocate of Reform Judaism and the founder of Hebrew Union College in Cincinnati, America's first rabbinical seminary. Wise decided that Calisch should become a rabbi and be trained at the seminary.

Early Years
For four years Calisch attended Hughes High School in the mornings and the preparatory department of Hebrew Union College in the afternoons. After graduating from high school he undertook a similar regimen for another four years. He began his day with secular courses at the University of Cincinnati and concluded it with rabbinical studies at Hebrew Union College. Calisch graduated with two degrees in 1887 and a reputation as one of the best pulpit orators in the seminary.

In 1886 Calisch had served as a student rabbi for the high holidays at Congregation Anshai Emeth in Peoria, Illinois, and he so impressed the congregants that they offered him the pulpit following his graduation. He spent four happy years in Peoria. Calisch enjoyed guiding his own congregation. In Peoria on 22 January 1890 he married Gisela Woolner, a native of Vienna, Austria. One of their four sons died in infancy and their only daughter died in an automobile accident in 1911. His daughter-in-law Edith Elliott Lindeman Calisch became a successful journalist and lyricist and wrote Calisch's biography.

Calisch was a firm yet beloved leader of Beth Ahabah, remembered fondly years after his death by congregation members he had married or taught in the religious school. A tall, handsome man with great powers of eloquence, he steered Beth Ahabah away from its earlier Orthodox leanings and toward full participation in Reform Judaism. Men and women sat together in the sanctuary, congregants no longer covered their heads during services, confirmation rather than bar mitzvah became the rite of passage into adulthood, and the most important service of the week became Friday evening rather than Saturday morning. A man of seemingly endless energy, Calisch prepared a revised Book of Prayer for Jewish Worship (1893), which Beth Ahabah used for two decades until the adoption of the Union Prayer Book, and he wrote A Child's Bible: Being the Incidents and Narratives of Sacred Scriptures, Simply Told (1894) for use by the religious school.

Reform Judaism
Beth Ahabah became one of the premier Reform congregations in the United States. Under Calisch's longtime leadership it embraced the tenets of the 1885 Pittsburgh Platform, which articulated a vision of modern Judaism free from the rituals and practices of either ancient Palestine or medieval Europe. Reform aspired to be a modern faith, concerned with the society around it. In a nation relatively free of anti-Semitism, Jews could be indistinguishable from their Christian neighbors except in matters of faith. The vision proved attractive to prosperous, assimilating Jews of the late nineteenth and early twentieth centuries, especially in the South. Beth Ahabah clung to the classic tenets of the Pittsburgh Platform long after the Reform movement began to revive older elements of faith and ritual and rethink what modern Judaism meant.

Civic Activity
Calisch's participation in the civic affairs of Richmond and beyond was also important to his congregation. For decades Christian ministers had been active in public affairs, delivering addresses and prayers on public occasions and giving sermons in neighboring congregations. The Reform ethos called for rabbis to engage in these activities as well, as another proof that except for their religious beliefs Jews were as patriotic, as civically engaged, and as public-spirited as their Christian neighbors. Calisch was part of that generation of Reform rabbis described by some scholars as emissaries to the Christians. In 1892 he was one of the first rabbis to deliver an opening prayer at the United States House of Representatives, and during the next fifty years he gave hundreds of speeches in Virginia, throughout the country, and even overseas. At Mount Vernon in 1899 Calisch gave the address and benediction at a nationwide Masonic celebration of the centennial of George Washington's death, the only person on the program who was neither a high-ranking Freemason nor a government official. On 13 June 1901 he gave the prayer at the second day's session of Virginia's constitutional convention, a clear recognition of his high standing among the state's political leaders. In 1913 Calisch returned to Mount Vernon to speak and afterward went to the White House for lunch with President William Howard Taft, who requested that he pronounce the traditional motzei prayer before eating. In 1930 and 1937 he spoke at the Tomb of the Unknown Soldier in Arlington National Cemetery. Throughout his tenure in Richmond, Calisch was a popular speaker at civic groups such as the Rotary (to which he belonged), and he also took an active public part in the local chapter of the Red Cross and many other community organizations. In May 1915 he addressed a rally of the Equal Suffrage League of Virginia on the steps of the State Capitol.

Interfaith Advocate
Calisch was widely recognized as a leader in establishing good interfaith relationships in Richmond and in gaining for Jews a greater acceptance by the Christian community. When Grace Baptist Church burned in 1896, he immediately offered the use of Beth Ahabah for Sunday services until it could be rebuilt. The church gladly accepted, an action that would have seemed impossible earlier in the century. When fire struck Grove Avenue Baptist Church four years later, Calisch made a similar offer. He pioneered in establishing joint Thanksgiving services by Beth Ahabah and First Baptist Church, and he cooperated closely with several of Virginia's leading Baptist ministers in their campaign to preserve strict separation of church and state by opposing mandatory Bible readings in public schools.

Jewish Scholar
Calisch also made his mark as a scholar. In 1901 he enrolled in the graduate school at the University of Virginia. He received an M.A. in 1903 and a Ph.D. in 1908 with a dissertation published as The Jew in English Literature, as Author and as Subject (1909). Even though he maintained his full-time duties at Beth Ahabah, Calisch found time to join the Washington Literary Society and the university debating team and won election to the prestigious Raven Society and the university chapter of Phi Beta Kappa. His extensive list of publications thereafter included essays on public affairs and lighter subjects and two textbooks for Jewish education, Methods of Teaching Biblical History, Junior Grade (1914) and Methods of Teaching Jewish History, Senior Grade (1914). A member of the liturgy committee of the Reform movement, Calisch helped revise the Union Prayer Book and wrote a number of the new prayers. He also wrote an eighty-page History of Congregation "Beth Ahaba," Richmond, Virginia, From Its Organization to Its Sixtieth Anniversary, 1841–1901 (ca. 1901; reprinted 1926).

The congregation grew in wealth and membership during Calisch's tenure. When he arrived in 1891 it numbered a scant 100 families and held services in an old building on Eleventh Street. In 1904 Beth Ahabah completed construction of a synagogue on West Franklin Street, and membership grew to more than 450 families by 1930. Being rabbi of a premier congregation enhanced Calisch's prestige, but his activities, especially in the broader Jewish community, reflected well on the temple in turn. He served two terms (1921–1923) as president of the Central Conference of American Rabbis, the national body of Reform rabbis, and he was a member of B'nai B'rith, the national Jewish fraternal organization.

As a mark of its appreciation, Beth Ahabah in 1925 gave Calisch a one-year sabbatical with full pay and funds to allow him to travel around the world. His reputation as an orator won him many invitations to speak, and he addressed the Jewish community in Shanghai and Rotary Clubs in Tokyo. In Delhi Calisch lunched with the viceroy of India. He returned greatly refreshed and embarked on another two decades of service to Beth Ahabah.

Opponent of Zionism
These years did not prove peaceful, either in the world or in Jewish communal affairs. The rise of Nazism in Germany aroused Calisch's fears, and during the 1930s he spoke out strongly against German treatment of Jews. Despite the threat to European Jewry, he firmly opposed the growing Zionist movement, which called for the reestablishment of a Jewish homeland in Palestine. Although the times had changed greatly, Calisch adhered until the end of his life to the 1885 Pittsburgh Platform, which proclaimed Jews a religious community and not a distinct nation that should have its own state. To him, Jewish nationalism undermined Jews' credibility as loyal Americans. Calisch was a founder of the American Council for Judaism, a group created in 1943 to fight Zionism. He brought many members of Beth Ahabah into the council, and for many years, well after the establishment of the state of Israel, Beth Ahabah had the reputation of being an anti-Zionist congregation.

Later Years
Despite this growing controversy within American Jewry and within the Reform movement, Calisch remained beloved by his congregation and widely respected in the city and beyond. He received an honorary doctorate of Hebrew law from Hebrew Union College in 1925, and in 1940 the University of Richmond awarded him an honorary doctorate of law. In his later years Calisch received honors and awards from many groups in recognition of his contributions to the community. In December 1939 the Richmond Times-Dispatch placed him on its Virginia Honor Roll and described him as one of the most brilliant and beloved churchmen in the country.

Calisch's wife died on 14 February 1927 following several years of paralysis and invalidism. In Brookline, Massachusetts, on 17 July 1927 he married Essie B. Straus Labenberg, a Richmond widow. In 1945 Calisch reached his eightieth year, and although no one in the congregation suggested that he retire, he asked for and in June received rabbi emeritus status. He did not long enjoy his retirement, however. While vacationing in July he suffered a cerebral embolism, and thereafter his health steadily deteriorated. Edward Nathan Calisch died in his room at the Hotel Jefferson in Richmond on 7 January 1946 and was buried two days later in the city's Hebrew Cemetery. His widow died seven weeks later.

Written for the Dictionary of Virginia Biography by Melvin I. Urofsky.