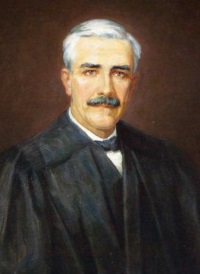 Richard Henry Lee Chichester (18 April 1870–3 February 1930), judge of the Virginia Supreme Court of Appeals, was born in Fairfax County and was the son of Daniel McCarty Chichester, a county court judge, and his second wife, Agnes Robinson Moncure Chichester, daughter of Richard Cassius Lee Moncure (1805–1882), longtime president of the Supreme Court of Appeals. Chichester was educated in the Fairfax County schools and later at Saint John's Academy, in Alexandria. He attended the University of Virginia during the 1889–1890 academic year and completed one year at its law school in the 1891–1892 term. Illness rendered him unable to continue study in an academic setting, but he read law at Fairfax Court House with Robert Walton Moore, later a member of the House of Representatives. In July 1892 Chichester received a license to practice in Fairfax County. He married Virginia Belle Wallace, of Stafford County, on 11 June 1895. They had two sons and one daughter.

Chichester established his own law office in Stafford County. In May 1895 he was elected commonwealth's attorney for the county and held that position until the General Assembly elected him judge of the courts of King George and Stafford Counties in December 1897. He served from January 1898 until 1904, when those courts were abolished. Chichester then practiced law with his brother for six years until December 1910, when the governor appointed him a justice for the Fifteenth Judicial Circuit, composed of Caroline, Hanover, King George, Spotsylvania, and Stafford Counties. The next session of the General Assembly in January 1912 confirmed the appointment.

In 1915 Samuel P. Powell, a one-term delegate representing Fredericksburg and Spotsylvania County, brought charges of political corruption against Chichester in the House of Delegates. Among other accusations he asserted that in those localities Chichester had inappropriately appointed electoral board members in an attempt to manipulate elections, was politically motivated in naming local officials, displayed bias in adjudicating cases, and had engaged in nepotism. After investigating the charges a special subcommittee of the Committee for Courts of Justice absolved him, finding that politics had not influenced his actions on the bench and that he had behaved impartially when conducting the business of the court. The assembly confirmed its confidence in Chichester by reelecting him judge of the Fifteenth Judicial Circuit in 1918.

Chichester had many interests outside his profession. On Glencairne, his farm near Falmouth, in Stafford County, he raised purebred Guernsey cattle that won prizes at many livestock and state fairs along the Atlantic seaboard. In 1900 Chichester formed the Star Printing and Publishing Company with himself as president and purchased the two Fredericksburg Star newspapers. Two years later he became president of the newly incorporated Free Lance-Star Publishing Company, which published both the local Free Lance and Daily Star newspapers (merged in 1926 as the Fredericksburg Free Lance-Star), to which he occasionally contributed editorials. In 1908 Chichester was appointed to a four-year term on the board of trustees for the State Normal and Industrial School for Women at Fredericksburg (later the University of Mary Washington). A lifelong Episcopalian, he served on the vestry of Saint George's Episcopal Church in Fredericksburg from 1901 until 1919 but later transferred his membership to Aquia Episcopal Church in Stafford, where he also served on the vestry. Richard Henry Lee Chichester died of chronic nephritis at a Fredericksburg hospital on 3 February 1930. He was buried in the family cemetery at Glencairne.

Written for the Dictionary of Virginia Biography by Elizabeth Terry Long.