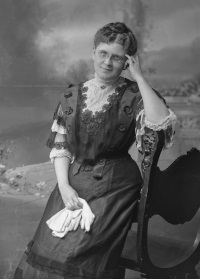 Mary Ellen Pollard Clarke (22 August 1862–30 July 1939), woman suffrage activist, was born in King and Queen County and was the daughter of John Pollard, minister at a Middlesex County Baptist church, and Virginia Bagby Pollard. In 1870 the family moved to Baltimore, where from 1877 to 1880 Pollard attended the city's Female High School and earned near-perfect marks in each of her subjects of study. Her family returned to Virginia in 1880, when her father became pastor of Leigh Street Baptist Church in Richmond. Between 1886 and 1901 he taught English at Richmond College (later the University of Richmond). An ardent proponent of education for women and an early devotee of the Social Gospel, John Pollard encouraged his seven daughters and two sons to study art and literature and instilled in them the idea that Christian morality demanded progressive reforms in public policy. Mary Pollard's brother, John Garland Pollard, aligned himself with the state's progressive Democrats early in his political career and later served as attorney general and governor of Virginia. Her other brother, Edward Bagby Pollard, a Baptist minister, advocated suffrage for women, and several of her sisters held office in women's organizations. On 15 November 1882 Mary Pollard married George Harvey Clarke, a Richmond hardware merchant. They had three daughters and two sons.

Community Activism
Despite an eye disorder that occasionally prevented her from reading for weeks at a time, Clarke pursued a life of study and self-improvement. Like many other educated middle-class American women, she found an outlet for her scholarship in women's literary societies. A founder in 1889 of the Every Tuesday Club, which soon changed its name to the Every Monday Club, Clarke wrote and presented an impressive variety of essays on history, literature, and religion during her more than thirty years of membership. She was also a member of the Woman's Club of Richmond from 1916 to 1930. The city's most prestigious literary organization for women, the club became increasingly involved in community reform projects, particularly in the realms of child welfare, education, labor law, and public health. By 1922 Clarke was active in the Virginia Federation of Women's Clubs, and, serving that year on the Resolutions Committee at the federation's annual convention, she helped produce a document that called for legislative protection for women in industry, the establishment of kindergartens and public libraries, and a variety of measures to strengthen public education. In 1923 she chaired the federation's Special Committee on Illiteracy. Clarke and her contemporaries in the woman's club movement asserted that their femininity endowed them with a finely tuned sense of morality as well as a special interest in childcare and thus gave them an indispensable role in shaping public policy.

Clarke worked for many years to improve public education in Richmond. As early as 1904 she was a member of the Richmond Education Association, organized in 1900 to generate public interest in school reform. For the 1911–1912 term she chaired the Press Committee, after which she served at least five consecutive terms as secretary. Clarke publicized the association's goal of securing a free public library for the city by writing letters to the editors of Richmond's major newspapers in which she argued that no city could prosper without investing in such an institution. Also affiliated with the Co-Operative Education Association of Virginia, organized in 1904, she volunteered in 1915 to speak to local community groups in order to spark interest in improving schools, health, roads, and home conditions throughout the state. The State Board of Education recognized Clarke's work on behalf of literacy and education by appointing her to two five-year terms on the State Library Board beginning in 1922. The first female member, she was part of the initial wave of women who obtained positions on state government advisory boards after adoption of the Nineteenth Amendment.

Woman Suffrage Advocate
Clarke's talent as a writer and her dedication to community reform combined most powerfully in her decade of work as a woman suffrage activist. By 1911 she had joined the Equal Suffrage League of Virginia, founded in 1909 to educate and organize Virginians during the struggle to secure voting rights for women. As the league's press secretary and editor-in-chief of its publication Virginia Suffrage News in 1914, as press chair in 1915, and as chair of the Committee on Political Study and Research between 1916 and 1920, Clarke disseminated the league's message throughout the state. In letters to Richmond newspaper editors and in her own editorials, she asserted that it was God's will that women, endowed with a special moral compass, find a voice in government and contribute to the improvement of humanity. Clarke appealed to Virginians' patriotism by arguing that true patriot-mothers had a broad interest in public welfare that extended beyond their own homes and that the nation would benefit from their ability to influence legislation. League resolutions called for such reforms as the abolition of child labor, compulsory education for children, an eight-hour workday, and the prohibition of alcohol. In 1916 the league appointed a chair for each of the state's congressional districts to organize constituents and place political pressure on Virginia congressmen. Clarke became chair of the Third District, comprising Richmond, Williamsburg, and the surrounding counties.

About 1915, to counter the widespread idea that a national constitutional amendment enfranchising women would infringe on states' rights, Clarke wrote Human-Rights Not in Violation of States' Rights: An Appeal to the Men of Virginia, in which she contended that women's eligibility to vote would not affect each state's ability to restrict the franchise through literacy tests and poll taxes. In "Equal Suffrage and the Negro Vote," a broadside published probably the following year, she addressed fears that the enfranchisement of women would threaten white supremacy. Clarke asserted that female suffrage would augment white political power and render the state "secure from negro domination."

Simultaneously a member of the Equal Suffrage League of Richmond, to which her husband, a daughter, and a son also belonged, Clarke planned the local organization's meetings as chair of the Program Committee, led the Church Committee for at least two years, and served as third vice president for four years. Despite the Equal Suffrage League's vigorous campaigns and growing membership, the General Assembly defeated resolutions for women's voting rights in 1912, 1914, and 1916. Nonetheless, Virginia women won the franchise in 1920 through the federal amendment.

To prepare women for the duties of citizenship, about 1920 Clarke wrote Studies in Citizenship for the Virginia Woman and Facts of Government Every Virginia Woman Should Know, which guided readers through the study of civics. The Equal Suffrage League disbanded that year and was succeeded by the Virginia League of Women Voters, which held registration drives, educated new voters, and advocated social welfare legislation. Clarke immediately became a member of the league, sat on the board of the Richmond branch, and chaired the state league's Committee on Research and Data beginning in 1921. That year she was one of four delegates representing Virginia at the Regional Conference of the National League of Women Voters, and the following year she chaired the Virginia league's Bureau of Information Committee.

Clarke's husband died on 1 November 1931. The expiration of her second term on the State Library Board in 1932 ended her public activism. Mary Ellen Pollard Clarke died of kidney disease on 30 July 1939 at her daughter's Henrico County home. She was buried in Hollywood Cemetery, in Richmond.

Written for the Dictionary of Virginia Biography by Jennifer R. Loux.