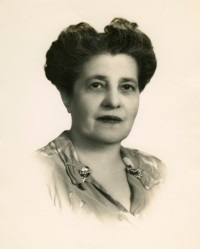 Naomi Silverman Cohn (15 April 1888–20 October 1982), civic leader, was the daughter of Harri Silverman and Sadie Silverman (maiden name unknown), who both emigrated from Poland with their children in 1886 and settled in Bristol, Pennsylvania. Her father found employment as a crockery peddler, and her elder sisters worked in a dry goods store and as yarn spinners in the local mill. She attended school and may have trained to be a teacher. For her first twenty years she gave her name on official documents as Mayme Silverman.

On 30 March 1909 Silverman married the Richmond lawyer Jacob Saul Cohn at her parents' home. The couple lived in Richmond, where Jacob Cohn had practiced law since graduating from the University of Richmond in 1904. They had two daughters and one son, and she later also raised orphaned twin nephews. Despite the demands of her young family, Cohn plunged into a whirl of civic activity. About 1911 she joined the Richmond section of the National Council of Jewish Women, a group that assisted newly arrived immigrants, and later chaired its legislative committee. A charter member of the Richmond League of Women Voters, Cohn served in the 1930s as the organization's treasurer and at various times on the state level as vice president, secretary, and chair of the legislative committee of the Virginia League of Women Voters. Beginning about 1922 she sat on the industrial committee of the Young Women's Christian Association. With fellow suffragist Adèle Goodman Clark, Cohn in 1923 founded the Virginia Women's Council of Legislative Chairmen of State Organizations (later the Virginia Council on State Legislation) to monitor bills of special interest to women and later became treasurer and president. After the Virginia Consumers' League formed in 1936 to work for legislation improving conditions of the state's laborers, she became its executive secretary.

Cohn was an outspoken advocate of women's political involvement and social advocacy. "Women can find time to do other things than raising children and attending bridge parties," she told a Richmond Times-Dispatch reporter in 1943. "The mothers are the ones who should be interested in the Legislature, because in this way they can make Virginia a better place for their children." Cohn spent a lifetime exercising the right to vote secured through the Nineteenth Amendment and never tired of encouraging others to do the same.

The "Virginia Honor Roll of 1938," published in the Richmond Times-Dispatch on New Year's Day 1939, praised Cohn for her role in the passage of a state law restricting a woman's work week to forty-eight hours. Before enactment of the law, Virginia women could work ten hours a day and as much as seventy hours a week. The new legislation limited women's labor to no more than nine hours a day and forty-eight hours a week in most occupations outside domestic and agricultural work, although legislative special interests secured exemptions for such occupations as bookkeepers, stenographers, and florists and for women stemming tobacco, shelling peanuts, shucking oysters, and canning and packing fruits and vegetables. Earning a reputation as a one-woman lobby, Cohn spent up to thirteen hours each day at the State Capitol as an unpaid advocate, interviewing delegates and senators and depositing reading material in their offices. She once explained to a reporter that her passion for helping working women and children came from witnessing the plight of mill hands in her hometown of Bristol, but she failed to mention that her sisters had also worked in the mills. Cohn's volunteer work in behalf of working women and children became a paying job in 1939, when she joined the Virginia Department of Labor and Industry's Division of Women and Children as an inspector of factories and mercantile businesses. She also was the division's director until 1942, when she began working for the Office of Price Administration in Richmond.

In 1947 Cohn as vice chair of the Richmond charter campaign successfully fought for a new city charter to replace the bicameral city council with a single nine-person body and to weaken the mayor's power by implementing a city-manager system. She broke new ground in 1950 when she was the only woman among the twenty-three candidates for the at-large seats on the city council. Citing her interest in civic affairs and her longstanding involvement in the Richmond Citizens Association (which, ironically, did not endorse her candidacy), Cohn ran as an independent, though the Richmond Democratic League, an umbrella organization for more than a dozen black interest groups, placed her name on its slate. Cohn advocated a new juvenile detention home, more schools, a study of local crime, and a slum-clearance program. She finished eighteenth with 3,553 votes.

Naomi Silverman Cohn died on 20 October 1982 in Milwaukee, Wisconsin, where she had moved in the mid-1970s to live with her elder daughter, Sarah A. Cohn Ettenheim, board president of the Settlement Cook Book Company and former president of the Federation of Jewish Women's Organizations of Milwaukee. Her cremated ashes were buried in Hebrew Cemetery in Richmond, next to her husband, who had died of cardiac failure on 15 November 1938. In 1993 the Virginia Business and Professional Women's Foundation named Cohn among the first thirty honorees on the Women of Virginia Historic Trail. The plaque commemorating her contributions is located at Congregation Beth Ahabah, in Richmond.

Written for the Dictionary of Virginia Biography by Jennifer Davis McDaid.