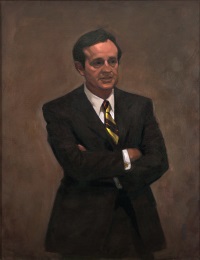 John Nichols Dalton (11 July 1931–30 July 1986), lieutenant governor and governor of Virginia, was born John Clay Nichols, in Emporia. His parents, Jessie Snow Turner Nichols and her first husband, Luther Clay Nichols, a baker, divorced when he was young. He divided his time between his mother's house in Bedford (she later married J. Clyde Key, of that city) and the childless family of his mother's sister, Mary Lou Turner Dalton, and her husband, Theodore Roosevelt Dalton, of Radford. His aunt and uncle adopted him and changed his name to John Nichols Dalton. He graduated from Radford High School and attended the College of William and Mary, where he was president of the student body in his senior year and a member of the Reserve Officer Training Corps. Dalton completed his senior-year studies and first-year law coursework simultaneously. He graduated with an A.B. in 1953 and entered the University of Virginia as a second-year law student but in 1954 began two years of active duty in an army field artillery command. On 18 February 1956 Dalton married Edwina Jeanette Panzer in Jeffersonville, Indiana. They had two daughters and two sons.

Dalton completed his legal education, received a B.L. from the University of Virginia in 1957, and joined his adoptive father's Radford law firm. In addition to Ted Dalton, who was a leader of the Republican Party of Virginia, a member of the Senate of Virginia, and later a United States district court judge, the other partners were Richard Harding Poff, then a congressman and later a judge of the Supreme Court of Virginia, and James Clinton Turk, who also became a United States district court judge. Dalton practiced law in Radford, acquired several large tracts of land in the area, and took part in civic affairs. Following his uncle into Republican Party politics, he worked in campaigns and served in many responsible capacities. He was president of the Young Republican Federation in Virginia in 1959 and 1960 and a member of the Republican Party's central committee from 1959 to 1972.

In 1965 Dalton won election to the first of three consecutive two-year terms in the House of Delegates representing Radford and Montgomery County. One of a small minority of House Republicans, who until that time had seldom been named to influential standing committees, he was appointed to low-ranking seats on the Committee on Labor and the relatively inconsequential Committees on Manufactures and Mechanic Arts and on Retrenchment and Economy. In his second term Dalton also served on the more-important Committee for Courts of Justice and in his third on the Committee on Appropriations and the Committee on Mining and Mineral Resources. Perhaps the most important debates in which he took part were in the special session of 1969 when the General Assembly acted as a constitutional convention and rewrote the state constitution. Dalton proposed a failed amendment that a judicial selection commission recommend persons to the governor for appointment to the state bench and that voters approve or reject the judge after he or she had served for a specified time. He also unsuccessfully tried to include a provision mandating that local governing bodies select school boards. Although Dalton questioned some aspects of the new constitution, he voted on 17 February 1970 to submit it to the voters, who ratified it in a referendum.

Following a reapportionment of the assembly in 1971, voters in Radford and the counties of Carroll, Floyd, Montgomery, and Wythe elected Dalton to the House of Delegates. He retained his seats on the same committees he had served on during his third term. In 1972 Dalton won a special election to fill a vacant seat in the Senate of Virginia representing the counties of Carroll, Floyd, Grayson, and Montgomery and the cities of Galax and Radford. He sat on the Committees on Commerce and Labor, for Courts of Justice, and on Local Government. During his single session in the Senate, Dalton was chief patron of a bill to issue revenue bonds supporting higher education.

In 1973 the Republican State Convention nominated Dalton for lieutenant governor and selected former Democratic governor Mills Edwin Godwin Jr. as the Republican gubernatorial candidate. In the general election Dalton defeated the Democratic nominee, James Harry Michael, later a United States district court judge, and independent candidate Flora S. Crater after a campaign in which most of the attention was focused on Godwin's contest with Lieutenant Governor Henry Evans Howell. Dalton attempted to raise the profile of the lieutenant governor's office, which he believed should be a full-time position.

Dalton easily won the party's nomination for governor in 1977. In his race against Howell, again the Democratic candidate, Dalton mounted a fiscally conservative, small government, pro-business campaign. He and his supporters attacked Howell as a dangerous liberal closely allied with organized labor. In a campaign characterized by deep differences of opinion between the two candidates and personal attacks by both parties, Dalton cancelled scheduled public debates with Howell. Dalton, overwhelmingly successful in traditionally Republican western districts and in the state's growing suburbs, won the election on 8 November 1977 with almost 56 percent of the vote.

As governor of Virginia from 14 January 1978 to 16 January 1982, Dalton worked productively with the General Assembly, in which conservative Democrats still held the majority. He emphasized economical management of the state bureaucracy and reduced the rate of growth in the number of state employees. Dalton settled a legal dispute, which Godwin had insisted on pursuing, with the federal government over desegregation of higher education in Virginia. In spite of the fiscal conservatism that was one of his trademarks, in 1980 Dalton proposed an increase of four cents per gallon in the state gasoline tax in order to provide money for highway construction (the assembly agreed to an increase of two cents). He also supported creating a law school at George Mason University and a new school of veterinary medicine at Virginia Polytechnic Institute and State University. Dalton made several trips overseas to improve trade between Virginia and foreign countries. When coal miners went on strike in southwestern Virginia and some violence resulted, he placed the National Guard on alert and sent in state troopers, actions that union officials denounced as anti-union strikebreaking. In October 1979 Dalton began a year-long term as chair of the Southern Governors' Association.

In December 1981 Dalton vetoed a redistricting bill that preserved the tradition of not having legislative districts bisect county or city boundaries. Legislators then for the first time had to redistrict the assembly entirely with single-member districts. As an unanticipated long-term consequence of that redistricting, Republican candidates found it easier to win election in single-member districts than they had in the large multimember districts that Democrats had traditionally dominated. During the ensuing years Republican membership increased in both houses of the General Assembly.

Virginia Democrats and some veteran journalists regarded Dalton's administration as more intensely partisan than those of his immediate predecessors, both Republicans. He occasionally had a testy relationship with the press and attempted to keep the Capitol press corps at a distance from his office. Dalton drew sharp public criticism on several occasions, for awarding a political ally and consultant a large state contract, for choosing expensive and showy modes of transportation for his administration while reining in the travel budgets of other state employees, and for purging political correspondence from the official office files even after it had been deposited in the state archives.

Prohibited by the state constitution from seeking reelection in 1981, Dalton joined the Richmond law firm of McGuire Woods and Battle and lived in suburban Henrico County after leaving the governor's mansion. Although he did not smoke, Dalton learned in 1983 that he had lung cancer, which was treated with surgery. Evidently enjoying the practice of corporate law and service on the boards of several major Virginia corporations, he declined to consider campaigning for governor again in 1985. The following year, the cancer returned, and John Nichols Dalton died in a Richmond hospital on 30 July 1986. After funeral services in Richmond and in Radford, he was interred in Sunrise Burial Park, in Radford. His widow (who later married John Burwell Phillips) won election to the Senate of Virginia from Henrico County in 1987 and was the unsuccessful Republican Party nominee for lieutenant governor in 1989.