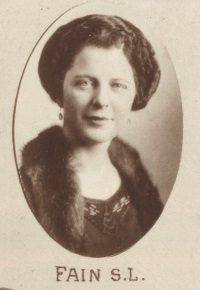 Sarah Lee Odend'hal Fain (23 November 1888–19 July 1962), member of the House of Delegates, was born in Norfolk and was the daughter of Edward Henry Odend'hal, a merchant dealing in stoves, and his second wife, Elizabeth Gordon Odend'hal. She attended the Leache-Wood Seminary before graduating from Norfolk's public high school in 1907. That year she joined the city school system as an elementary school teacher and after 1915 served in an administrative capacity. For a dozen years she took summer courses in educational administration at the University of Virginia, although as a woman she could not earn a degree. On 8 September 1917 she married Walter Colquitt Fain, an architect and army officer. They had no children. During World War I she sold Liberty Bonds and joined the local Red Cross. She resigned from the school system after her husband returned to Norfolk from service on the Mexican border in 1918.

Political Career
Sarah Lee Fain, as she was known for much her life, did not publicly advocate woman suffrage, but after the Nineteenth Amendment was ratified in 1920 she joined the Norfolk chapter of the League of Women Voters and soon became involved in Democratic Party politics. In 1922 she volunteered for Claude Augustus Swanson's successful reelection campaign for the United States Senate and was secretary of the campaign's committee in Norfolk. She made numerous speeches and focused on organizing women in the city's precincts.

The following year a group of Norfolk women persuaded Fain to run for office. In a crowded field of nine candidates she received sufficient votes in the Democratic primary on 7 August 1923 to secure a place on the party's slate for Norfolk's four seats in the House of Delegates. On 6 November she finished fourth with 3,361 votes to win election. Fain and Helen Moore Timmons Henderson, of Buchanan County, were the first two women to be elected to Virginia's General Assembly. They attracted publicity and were greeted with flowers when they arrived at the Capitol in January 1924, but they quickly settled into their legislative roles. Fain received appointments to the Committees on Schools and Colleges, on Claims, on the Chesapeake and Its Tributaries, and on General Laws. Her bill authorizing localities to provide free textbooks to the public schools did not pass, but she was successful in helping secure legislation allowing the State Corporation Commission to regulate the Virginia Pilot Association's maritime monopoly, and she earned a reputation as an able and conscientious legislator. Important legislation that Fain voted for during the session included an act authorizing the sterilization of people deemed unfit to have children and the Racial Integrity Act, which was part of a series of laws designed to prevent racial intermixing.

Victorious in the Democratic primary in August 1925, Fain and her three fellow nominees easily defeated four Republican candidates, including one woman, Frances G. Ells, in November. During the session that met starting in January 1926 she retained her membership on the same committees with the exception of an appointment to the Committee on Appropriations instead of General Laws. Interested in reforming Virginia's tax code, Fain argued that a proposal to tax cosmetics to fund rural health clinics was an unfair burden on women. She fought an attempt to weaken the child labor law and introduced two bills that died in committee or failed to pass: one would have included restaurant employees among the classes of women whose labor was limited to ten hours per day and also increased fines on businesses that violated the law; the other would have abolished the death penalty except in cases of treason or assaults on women. Although Fain was present when the assembly voted to require racial segregation in public places, she did not vote on the bill. After winning election in 1927 to a third term with no opposition, Fain was appointed chair of the Committee on Schools and Colleges, which evaluated the recommendations of a commission that had been studying the public school system and drafted a reform bill that the assembly adopted. In February she voted for an anti-lynching bill that was then the strictest in the nation.

Twice, in 1925 and 1929, Fain considered running for lieutenant governor, but despite receiving support she declined to seek that office. She announced in May 1929 that she would not run for reelection to the House of Delegates. Fain continued to participate in politics, often speaking on behalf of John Garland Pollard during his successful gubernatorial campaign later that year. She also served as a member of the Democratic National Convention's speakers bureau between 1928 and 1932. On 24 January 1930 Fain declared her candidacy for the House of Representatives from the Second Congressional District. Her announcement garnered national attention, but she lost in a three-way race in the Democratic primary to former congressman John Thomas Deal.

Business Career
Fain also assisted her husband in his business endeavors. From 1919 to 1924 she served as secretary and treasurer of Fain Construction Company. She managed the plant operations at Fain Manufacturing Company, which produced built-in furniture, from 1923 to 1924, and in the latter year became its secretary and treasurer. Fain's husband sold his businesses in 1931 and she began living part-time in Washington, D.C. Although she supported the failed favorite-son presidential campaign of Harry Flood Byrd (1887–1966) in 1932, Fain embarked on an air tour with a female pilot in October and November, visiting several mid-western states to stump for Franklin Delano Roosevelt.

Fain sought a position in Roosevelt's administration. From January to March 1934 she directed the organization of the United States Information Service, which disseminated information about the various relief programs of the New Deal. Drawing on her experience in politics and in managing her husband's business, Fain applied to work as a project manager for the Department of the Interior's Division of Subsistence Homesteads. Despite the support of United States senator Carter Glass, she did not receive a position as manager of the homestead program in Shenandoah National Park. In September 1934 she did receive appointment over local objections to manage the program in Raleigh, North Carolina. She supervised the purchase of land and the planned construction of affordable housing for factory workers in the area, although when the project was deferred in the spring of 1935 she requested a transfer. Fain then joined the United States Department of Agriculture's Resettlement Administration, which relocated struggling families to planned communities, and from October 1935 to April 1936 she served as the regional supervisor for selecting families in Texas. She became disillusioned with the program's effectiveness.

After leaving government work Fain and her husband moved to San Marino, California, where she continued to participate in local politics as a speaker. In 1940 she publicly endorsed Republican presidential candidate Wendell Willkie over Roosevelt. Fain often traveled in Europe and returned to Virginia on a few occasions, once in 1951 to campaign for Meeta B. Myers, who was then a candidate for Fain's former seat in the House of Delegates. Sarah Lee Odend'hal Fain suffered poor health near the end of her life and died in San Marino on 19 July 1962. She was buried at Norfolk's Elmwood Cemetery.

Written for the Dictionary of Virginia Biography by Sandra Gioia Treadway and Marianne E. Julienne.