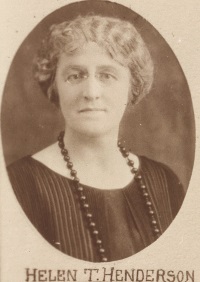 Helen Moore Timmons Henderson (May 1877–12 July 1925), member of the House of Delegates, was the daughter of George S. Timmons and Martha (or Mattie) Welby Rhoten Timmons and was born in Cass County, Missouri, not long before her parents returned to their native state of Tennessee. She grew up in the town of Mossy Creek in Jefferson County and attended nearby Carson-Newman College (later Carson-Newman University) in Jefferson City. On 31 May 1894 she married Robert Anderson Henderson, one of the professors there. They had one son and one daughter, Helen Ruth Henderson, who was elected to the House of Delegates in 1927 and served one term.

About 1907 Henderson's family moved to Southampton County, Virginia, where her husband was principal of the Franklin Female Seminary. They moved in 1911 to the small town of Council, in southern Buchanan County, Virginia, and took over a school recently founded by the Baptist General Association of Virginia's State Mission Board in conjunction with the Woman's Missionary Union of Virginia. Her husband served as principal of the school, which was known variously as the Buchanan Baptist Mission School and as the Buchanan Mission School, and she as assistant principal in charge of supervising dormitories and overseeing the health care, religious instruction, and social life of the students, some of whom called her Mother Henderson. The school, which constructed a new building in 1922, served the residents of Buchanan, Dickinson, and Russell Counties, which did not have adequate public schools.

Henderson was active in Baptist affairs, particularly the Woman's Missionary Union, of which she twice served as a vice president in 1919–1920 and in 1921–1922. She also sat on the board of trustees of the Virginia Baptist Hospital in Lynchburg when it was organized. During World War I, she participated in the sale of war bonds. Surviving records do not indicate that she was an active supporter of woman suffrage. On 24 March 1923, following a redistricting of assembly seats, a convention of Democrats from Buchanan and Russell Counties nominated Henderson for the new flotorial district representing those two counties in the House of Delegates. She campaigned for two weeks in the autumn and on 6 November 1923 won election by a vote of 4,008 to 3,511 over L. E. Fuller, who had support from Republicans, some unhappy Democrats, and opponents of Prohibition.

Henderson and Sarah Lee Odend'hal Fain, elected from the Norfolk City district, enjoyed a brief celebrity as the first two women elected to the General Assembly during its session that began on 9 January 1924 and adjourned on 18 March. Henderson served on the Committees on Roads and Internal Navigation, on Counties, Cities, and Towns, on Executive Expenditures, and on Moral and Social Welfare. The delegates allowed her a signal honor on 23 February when the Speaker stepped down from the chair so that for a few minutes she could be the first woman ever to preside over a legislative session in Virginia. One of Henderson's primary interests was creation of a new circuit court for Buchanan and Tazewell Counties. Her bill passed the House of Delegates but died in the Senate. She was a co-patron of a bill that raised the age of consent for sexual intercourse, and she also received credit for persuading the State Highway Commission to improve the road from Fuller's Store in Russell County across Big A Mountain to Council. Henderson left the floor and did not vote on 8 March 1924, when the house passed two important bills: the Racial Integrity Act that defined every person with any discoverable African ancestry as "colored" and thereby segregated them from white people; and the bill that authorized sterilization of inmates in the state's mental hospitals and other institutions, which ultimately led to the sterilization of thousands of Virginians deemed mentally incompetent, genetically inferior, or socially undesirable.

Frequent references to Henderson and Fain in the press led to speculation that the Democratic State Convention that year would name them at-large delegates to the party's presidential nominating convention, but Fain declined. The state convention selected three women as at-large delegates and four other women to represent their congressional district, while Henderson was named as an alternate. The joint Buchanan-Russell County Democratic Party convention nominated Henderson for a second term without opposition on 4 April 1925. In July, while visiting her parents in Tennessee, she contracted encephalitis and entered a Knoxville hospital. Helen Moore Timmons Henderson died there on 12 July 1925 and was buried at Westview Cemetery in Jefferson City, Tennessee. A delegation of southwestern Virginia members of the assembly attended her funeral. State Route 80 in Buchanan County is named the Helen Henderson Highway, and in 2010 the state approved the placement of a highway historical marker honoring Henderson near the site of the mission school in Council.