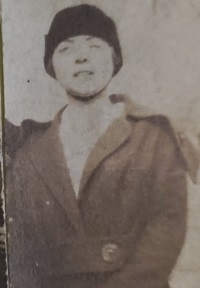 Maud Powell Jamison (14 January 1890–18 June 1974), woman suffragist activist, was born in Texas, likely in Cass County, or possibly in Fort Worth, and was the daughter of Benjamin Gates Jamison and Mary Eliza Greene Jamison (sometimes spelled Jameson). By 1894 the family had moved to Norfolk, Virginia, where her father worked as an engineer for an ice company before his death in 1915. A standout student at the local high school, Jamison received a gold watch in 1908 for winning an essay contest sponsored by the Great Bridge chapter of the National Society Daughters of the American Revolution. In 1909 she began teaching in the Norfolk public schools.

Equal Suffrage League
By the mid-1910s Jamison, who later spelled her first name as Maude, had become active in the woman suffrage movement in Norfolk and joined the local chapter of the Equal Suffrage League. She distributed suffrage materials for the league in 1915, but she also joined the Norfolk chapter of the Congressional Union for Woman Suffrage, which sought the franchise via a single amendment to the Constitution of the United States rather than the Equal Suffrage League's objective of obtaining the vote through amending the state constitution. Jamison became so inspired by the Congressional Union's work that she left teaching to devote herself fulltime to the cause. As the local chapter secretary, she helped organize activities for the group and was recognized for her intellect and work ethic.

National Woman's Party
In 1916 Jamison left Norfolk for Washington, D.C., where she worked at Congressional Union's national headquarters and eventually became an assistant treasurer with a monthly salary of $100. She joined the national office about the time its members had voted to establish the National Woman's Party in states that already had woman suffrage. Both organizations worked that autumn to defeat President Woodrow Wilson and Democratic congressional candidates who opposed a federal woman suffrage amendment. Wilson narrowly won reelection, however, and Democrats retained control of Congress. That defeat and Wilson's rejection of a petition supporting a federal amendment early in 1917 led to profound changes in the organization. In March 1917 the Congressional Union folded into the National Woman's Party, making it a truly national woman suffrage organization.

Alice Paul, the organization's chair, had previously decided on the extraordinary course of picketing the White House to pressure Wilson to support the suffrage cause. On 10 January 1917 the first pickets, including Jamison, went on duty at the White House gates. The women were organized in military style (Jamison ranked as a private), and stood silently at the gates with their banners calling for a suffrage amendment.

Picketing and Prison
Pickets continued at the White House nearly every day, and tensions with the administration increased as protests occurred in the spring and early summer against a backdrop of America's entry into the first world war and a Russian diplomatic delegation visit. The issue exploded on 25 June 1917 as the National Woman's Party sent twenty picketers back to the streets. Some, including Jamison, carried banners with protests of "How long must women wait for liberty?" and "Mr. President, you say liberty is the fundamental demand of the human spirit." Police arrested them on charges of obstructing traffic. A front-page story about Jamison appeared in the Virginian-Pilot and the Norfolk Landmark with the headline, "Norfolk Advocate of Cause Arrested." The reporter was unable to learn how Jamison's family reacted to her arrest and described her as "devoting her life to the equal suffrage cause, striving to realize one consuming ambition—to be known throughout the country as an eloquent speaker and pleader for equal rights at the polls."

Released on their own recognizance, Jamison and the others picketed the very next day and were arrested again for obstructing traffic and released on bail to appear in court the following day. A newspaper reported that the suffragists left the police station defiantly. The last to leave the station, Jamison carried a banner that read "Mr. President, what will you do for woman suffrage?" On 27 June their case for the previous day's arrest was not tried and they were released. On that same date, however, Jamison and the others were convicted for the 25 June arrests and subject to a $25 fine or three days in the District of Columbia's jail. They chose imprisonment, which led the National Woman's Party official weekly newspaper the Suffragist to identify them as "the first suffrage prisoners in this country." While incarcerated, Jamison and her fellow suffragists held a meeting and sang songs with the other female inmates.

On 15 August 1917 Jamison and other picketers at the White House were attacked by what newspapers described as a mob of unruly young men, led by a contingent from the United States Naval Reserve. In the confrontation Jamison was among those whose banners were destroyed, and Alice Paul was dragged along the sidewalk. Jamison, fellow Norfolk resident Pauline Forstall Colclough Adams, and eight others were arrested on 28 August, again ostensibly for obstructing traffic when picketing the east gate of White House. They appeared in court the next day, where they were convicted and sentenced to a $25 fine or thirty days in jail. The women successfully appealed the decision, though the presiding judge notified their defense attorney that no more appeals would be granted. Their convictions were later dismissed on the grounds that protesting on the sidewalk was not itself illegal and that the charges did not adequately describe the unlawful acts the suffragists did to crowd and obstruct traffic.

Undeterred, on 6 October 1917 Jamison was one of eleven protesters arrested at the White House on a charge of obstructing traffic. At trial two days later all were found guilty, though their sentences were deferred. On 15 October Jamison and several others were arrested again at the White House's east gate. Found guilty in court the next day, they were sentenced to a $25 fine or six months' imprisonment. On 22 October, Jamison and five others, including Alice Paul, were sentenced to an additional thirty days in jail for the 6 October arrest. Conditions in the jail were shocking to contemporaries as the suffragists were held in solitary confinement in very small cells without clean clothes, reading materials, or contact with the outside world including family. The Suffragist commented that "Though obviously political offenders, they are receiving the treatment usually reserved for the most depraved law-breakers." Jamison was among eight women who were released on 28 November.

Not giving up the fight, Jamison and others returned to the picket lines the following year. She was among a group arrested in August 1918 for holding a suffrage meeting in Franklin Square, near the White House. Jamison was also reportedly "knocked senseless by a policeman" while carrying a banner at an air show in October. While Congress was in session during the fall, Jamison and other National Woman's Party members picketed at the Capitol. On 21 November 1917 about a dozen women, including Jamison, protested as the Senate adjourned without having considered the suffrage amendment. Although not arrested, the suffragists were roughly handled by police officers, which included being "thrown down the Capitol steps" and "dragged helplessly" into a guard room. Jamison later exclaimed that "their treatment of us was as brutal as on any of the other occasions." She and others were arrested in January 1919 while picketing and keeping a watch fire where they burned copies of Wilson's speeches in front of the White House. She served a five-day sentence. One of the National Woman's Party most steadfast protesters, Jamison was probably arrested more often than any other Virginian for peacefully advocating the right to vote.

Later Years
On 4 June 1919, Jamison attended a celebratory dinner of suffrage leaders at the Willard Hotel after Congress voted to submit to the states an amendment prohibiting states and the federal government from denying the right to vote on the basis of sex. Jamison relocated to New York later in the year and worked as a social worker for a charitable organization. She lived for a while in Saint Louis, Missouri, where she met John Earl Thomas, whom she married on 16 July 1921, in Topeka, Kansas. The marriage was brief and she later divorced her husband. She returned to Norfolk with their daughter. After her mother's death in March 1928, she left Norfolk and by about 1934 settled in the township of San Gabriel, in Los Angeles County, California. There she worked for a company that manufactured airplane parts. Maude Powell Jamison Thomas died of a heart attack in Los Angeles on 18 June 1974 and was buried in Rose Hills Memorial Park in Whittier, California, with a marker inscribed "Suffragette 1919." Later a memorial gravestone was erected for Jamison and a sister in Elmwood Cemetery, in Norfolk, where her parents are buried.