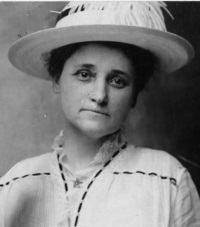 Mary Eugenia Benson Jobson (5 May 1872–10 January 1962), woman suffrage activist and public welfare official, was born in Columbus, Georgia, and was the daughter of Henry L. Benson, a railroad yard master, and his first wife Luella A. Robinson Benson. She went by Eugenia, and sometimes Jennie, throughout her life. Little is recorded about her childhood and education before she married Richmond, Virginia, native Frank Lee Jobson on 4 July 1889 in Columbus. They lived in Richmond and between 1890 and 1902 had three daughters, two sons, and one other child who died young.

Soon after a group of Richmond women formed the Equal Suffrage League of Virginia in November 1909, Jobson joined and began working at the grassroots level to win support for woman suffrage. She organized information booths at the state fair, canvassed for signatures on petitions to members of the General Assembly, made speeches, and served as a ward chair for the Richmond league. She also helped organize new leagues in several cities and counties around the state. The league's secretary in her April 1915 report commented, "I would like to do justice to Mrs. Frank L. Jobson's untiring efforts to sign up converts—but I fear that is impossible." Described as "untiring, persistent, unruffled, dignified and absolutely compelling," Jobson became such an effective organizer that later in the decade the state league lent her to help with suffrage campaigns in New York and North Carolina. In 1919 she assisted with the Equal Suffrage League's campaign to enroll as many supporters of woman suffrage in each county and city as the number of men who had voted in the most recent election in order to persuade members of the General Assembly to support an amendment. As part of the league's ratification committee in 1919 and 1920, Jobson joined members Adèle Clark, Nora Houston, and national organizer Mary Elizabeth Pidgeon in interviewing legislators to determine whose votes they might sway.

Following ratification of the Nineteenth Amendment in 1920, Jobson became a charter member and district chair of the Virginia League of Women Voters. Working with Sarah Blair Harvie Wormeley, she helped enroll more than 12,000 women as new voters in Richmond prior to the November 1920 election. In February 1921 Jobson was appointed to the Richmond electoral board, reportedly the first woman in Virginia (and the South according to several newspaper accounts). She served on the city's Democratic Committee for ten years and worked on various local and state political campaigns, including the 1921 gubernatorial campaigns of Elbert Lee Trinkle, who had been a supporter of woman suffrage as a member of the Senate of Virginia, and the 1925 campaign of Harry Flood Byrd (1887–1966), who had been opposed, and at least one of the Richmond mayoral campaigns of John Fulmer Bright. In 1925 Jobson commented, "Voting is not a question of sex but of citizenship…every woman uses her judgment in regard to her ballot, just as men do."

She joined the recently established Social Service Bureau of the Richmond Department of Public Welfare in 1924. She became chief of the bureau the following year and oversaw its work with institutions and charitable organizations that provided aid for destitute city residents. In 1933 she was named head of the bureau's Mothers' Aid program, which provided living allowances to a small number of carefully selected families. In 1935 Mayor Bright asked for her resignation from the bureau "in the best interests of preserving harmony within the department and the discharge of more efficient service to the public." Jobson protested the controversial decision publicly and asserted that she was let go "solely for political reasons." At first she refused to submit a letter of resignation, but a combination of local politics and difficult conditions that resulted from the rapid expansion of the bureau's duties with insufficient funding as a result of the Great Depression forced her to leave the job in October 1935.

She was an active member of the Quota Club, a Richmond club for businesswomen, and the Richmond Business and Professional Women's Club. She was also president of the Richmond Women's Democratic Club. Jobson's husband died on 5 March 1933. Once described as a born politician, Jobson worked tirelessly to get women the vote and was proud to say that "suffrage has been well-handled. Women have made quite an improvement in many social conditions, especially along the lines of child labor and social work and reforms." In 1959, on the fiftieth anniversary of the Equal Suffrage League's founding, Jobson and Adèle Clark told a newspaper reporter that they had not ever missed voting in an election. Jobson had once even hobbled to the polls on a crutch after she broke her leg.

Mary Eugenia Benson Jobson died of heart disease at her Richmond home on 10 January 1962 and was buried at Forest Lawn Cemetery, in neighboring Henrico County.