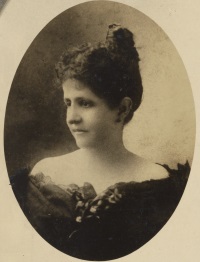 Ellen Gertrude Tompkins Kidd (d. 4 February 1932), entrepreneur and woman suffrage activist, was born in Richmond, and was the daughter of Edmund William Tompkins and Julia Mosby Burton Tompkins. The date of her birth is not recorded in an extant family Bible. Public documents including census returns, her marriage and death records, her passport, and newspaper feature articles give ages indicating different years of birth. Her 1926 passport lists a birth date of 18 November 1852, but she informed the census enumerator in 1900 that she was born in November 1855. No two census returns agree and give ages indicating she was born as early as December 1845 and as late as April 1860. Her parents' reporting to the census enumerator in December 1850 of a daughter Ellen age four indicates that she was born probably about 1846. Variations for ages of her children recorded on later census returns suggest that the family did not regard ages or dates of birth as especially important.

Pin Money Pickles
Ellen Tompkins grew up in Richmond and attended a girls' school operated by Mary E. Pegram. About 1868 she began using a family pickle recipe reportedly handed down from her great-grandmother. The pickles were popular with her friends and neighbors, and she began to exhibit them at the state fair where they won prizes. "One day," she recalled many years later, "a neighbor of mine came in to ask if she might have some…but she insisted on paying, and, pressing the money in my hand, said: 'This is for pin money.'" The phrase "pin money" referred to income women earned from household work, sometimes sewing or selling extra eggs or butter. From this modest beginning, she developed Pin Money Pickles into an international company that did half a million dollars' worth of business in 1926.

On 4 April 1872 Tompkins married John Boulware Kidd, a grocer and widower who had been married to her sister, with whom he had four surviving children. Between 1873 and 1886 they had two daughters, seven sons (four of whom died in childhood), and one child who died at birth. Facing an increasing demand for her pickle delicacies, Kidd formed a small company to produce and market them commercially. She sold by the barrel, and in 1872 she received her first big order from W. W. Gwathmey and Co. in New York. She went on to land a lucrative contract with the Pullman Company. "Making a contract with the Pullman Company was really quite a feather in my cap," she remarked, "for I was, perhaps, the first woman to enjoy that distinction." Impressed with his wife's business skills, her husband joined her in the family business.

After fifteen years Pin Money cleared a profit of two thousand dollars. Asked by a reporter if she was discouraged by this modest amount, Kidd replied "With ten children born to me in those fifteen years, I felt I was most fortunate in owing no man a dollar." Pin Money Pickles continued to grow, and in 1898 Kidd moved her family into a large house at 706 East Leigh Street and started producing the pickles in an outbuilding on the property. She later constructed a 10,000-square-foot factory to keep up with the demand. Kidd traveled extensively throughout the United States and Europe to market her product. Her charming personality and savvy business skills led to numerous national and international contracts. "I think I must have been the original woman drummer," she recalled, "and I have had many amusing and educating experiences on the road." In 1910 Kidd built a five-story factory on West Marshall Street in Richmond. She attributed her success to hands-on management and pride in her product. Kidd made sure that her product was listed by its brand name on restaurant menus, and an extensive national advertising ensured that "pin-money pickles became 'bread-money pickles.'"

Woman Suffrage Advocate
Besides being a highly successful business woman, Kidd had interests beyond her pickle empire. She used her considerable skills to promote other causes, especially woman suffrage. Among her many charitable and civic pursuits, Kidd worked diligently on behalf of women's rights, first as treasurer of the Equal Suffrage League of Virginia and later as a charter member of the Virginia League of Women Voters. The Equal Suffrage League was formed in 1909 by a small group of Richmond activists who worked to educate citizens and legislators and win their support for woman suffrage. The next year Kidd became state treasurer and handled finances, collected pledges, helped form local branches, attended state and national conventions, and worked tirelessly on behalf of suffrage.

Congress submitted the Nineteenth Amendment to the states for ratification in 1919, but Virginia's General Assembly did not ratify the amendment. Even after suffrage was attained, roadblocks remained, and in 1920 Virginia suffragists founded the Virginia League of Women voters. Kidd was a founding member and served as treasurer. In 1921 she attended the National League of Women Voters convention as part of the Virginia delegation. Although the Equal Suffrage League failed in its efforts to get the amendment ratified in Virginia, the members recognized the importance of their organization. In 1926 Kidd along with other founding members of the league presented a collection of suffrage banners and flags to the governor.

Kidd was on the board of Sheltering Arms Hospital in Richmond and for many years was one of the few female members of the Richmond Chamber of Commerce. She also belonged to the Richmond Business and Professional Women's Club, which promoted the interests of business women. At the 1922 convention of the National Federation of Business and Professional Women's Clubs, Kidd, always the clever marketer, made sure that Pin Money Pickles were served at the banquet and identified by name.

Later Years
After Kidd's husband died in 1910, she moved into the Shenandoah building, one of the city's first luxury high-rise apartment buildings, one of several real estate investments she owned. She incorporated her pickle business as Mrs. E. G. Kidd, Incorporated, in 1913. Even though Ellen Gertrude Tompkins Kidd stepped away from active management of her company late in the 1920s, she remained its president until her death in Richmond on 3 February 1932. She was buried at the city's Shockoe Cemetery. In her will, Kidd made provisions for her sizable estate to be divided among members of her family and several local hospitals, orphanages, and other charitable institutions. The company continued production in Richmond until 1950 when it moved to Gloucester County.