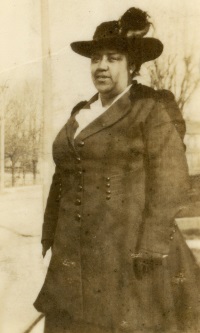 Millie Lawson Bethell Paxton (2 February 1875–2 July 1939), civic leader and political activist, was born in Pittsylvania County, Virginia, and was the daughter of Alice Lawson. Birth records do not name her father, but by the time of her marriage in 1895, she had assumed the name Millie Lawson Bethell and recorded the name of her father—likely her stepfather—as Clinton Bethell. She also apparently believed that she was born on 29 March 1876 or 1877, which latter date her descendants placed on her gravestone. She was educated at the Virginia Seminary (later Virginia University of Lynchburg) and at Hampton Normal and Agricultural Institute (later Hampton University), class of 1895, and married William H. Paxton, a saloonkeeper, in Danville, Virginia, on 25 December 1895. They lived in Danville and had two sons and one daughter. Paxton's husband died on 6 October 1901, not long after they moved to Roanoke, where he operated one of the city's first horse-drawn cab companies.

Left to raise her children alone, Paxton worked at various times in domestic service or as a laundress, but her primary livelihood was as the attendance—or truant—officer for the city's African American schools, a post she held for many years. A 1921 article in the Richmond Planet reported that she "is on the job each and every day. There are so many boys and girls who do not attend as they should, and Mrs. M. B. seems to keep on the run."

Paxton participated in an extensive array of community, church, and political activities and was an officer or member of almost every African American women's organization in the city. By 1905 she was helping organize local chapters of the Independent Order of Calanthe, the women's affiliate of the Knights of Pythias, an African American fraternal association headed by John Mitchell Jr., editor of the Richmond Planet. At Roanoke's prominent First Baptist Church, Paxton was the longtime teacher of the Dorcas Bible Class, vice president of the Missionary Society, and a leader in the Helping Hand Club, which assisted in special services and observances. First Baptist's Church News, which served as an informal record of African American society in Roanoke during the era, regularly mentioned activities Paxton was involved in, including speaking engagements. In May 1933, Paxton was a Mother's Day orator in Martinsville, Virginia, and in February 1934, she gave an inspirational speech in Roanoke to the Ladies' Auxiliary of the Association of Colored Railway Trainmen.

At a time of segregated and often inadequate health care for black citizens, Paxton served for several years as president of the auxiliary at the local Burrell Memorial Hospital, a pioneering health-care facility for African Americans. Conscious of the value of home ownership and neighborhood beautification, she became the founding president of the Ideal Garden Club, formed with thirty-two members on 29 October 1929. She also served as Roanoke chair of the Better Homes in America organization after World War I. Paxton helped organize the Phyllis Wheatley branch of the Young Women's Christian Association, to bring the benefits of the leadership and empowerment organization to the city's black women and girls. Formal launch of the branch occurred on 1 April 1923 with 127 charter members, including Paxton as chair of the House Committee. In addition, she was a charter member of the Virginia State Federation of Colored Women's Clubs and later chair of its Ways and Means Committee, an officer of the State Parent-Teachers Association, and an active Red Cross worker.

Paxton's obituary credited her with organizing Roanoke's first Colored Women's Voting Club. Alternatively identified as the Colored Women's Republican Club of Roanoke, the group proved instrumental in helping register black women to vote in the 1920 presidential election, the first after ratification of the Nineteenth Amendment. In the Richmond Planet, John Mitchell Jr. heaped praise on the club, which he said "went over the top on election day." With Paxton serving as president, the group inspired a reported 655 black women to register and vote. The showing contributed to Roanoke's surpassing Norfolk, a larger city, to rank second to Richmond among Virginia localities in registering women for the historic election. "Roanoke, like all the other cities in the State of Virginia," Mitchell continued, "was surprised at the interest that its colored women took in the affairs of the nation." He predicted a bright future for the club and urged his readers to "Watch Roanoke."

Paxton remained active in politics. In 1934 and 1935 she spearheaded a National Association for the Advancement of Colored People membership drive in Roanoke that was sufficiently successful to merit a photograph in The Crisis, the organization's national publication. Among the new members enrolled during the drive was Oliver White Hill, who later achieved legendary status as a civil rights attorney. In 1936, Paxton was listed first on a nine-member Roanoke-area NAACP committee that raised money for the Scottsboro Defense Fund in support of nine African American teenagers falsely accused in Alabama of raping two white women.

Paxton's three children were noteworthy in their own right. Her eldest, William Herman Paxton, was an accomplished high school athlete who joined the United States Army and was killed in France during World War I. The Herman Paxton Post No. 161 (Colored) of the American Legion was organized in Roanoke in 1933. As a Gold Star mother, Paxton was president of the post auxiliary. Lawrence Paxton became a prominent Roanoke dentist after he graduated from the Howard University College of Dentistry. In 1956, at a time when few black citizens held elective office in the South, he was a candidate for Roanoke city council, and he was later chair of the biracial board of trustees of Burrell Memorial Hospital, among other posts. Her daughter Lillian Paxton was reportedly the first African American physical education teacher in Roanoke schools before she married and moved to Hampton.

Millie Lawson Bethell Paxton, who suffered from chronic hepatitis and arteriosclerosis late in life, died in Roanoke on 2 July 1939. She was buried at Lincoln Burial Park, later known as Williams Memorial Park Cemetery. At her death a Virginia newspaper described her as "one of Roanoke's most widely known and beloved colored citizens," active "in all phases of civic and religious work."

Image courtesy of the Gainsboro Branch of Roanoke Public Libraries.

Written for the Dictionary of Virginia Biography by Margaret Edds.