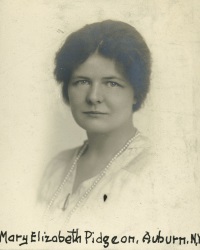 Mary Elizabeth Pidgeon (2 August 1890–24 November 1979), woman suffrage activist and labor economist, was born in Clarke County, Virginia, and was the daughter of Lewis Pidgeon and Susan Talbott Williams Pidgeon, whose families had been members for decades of Hopewell Monthly Meeting, Society of Friends (also known as Quakers). She was educated at a Friends School in nearby Loudoun County, at the George School, in Bucks County, Pennsylvania, and at Swarthmore College, from which she graduated in 1913 with a B.A. in English. In 1914 Pidgeon was appointed a teacher at the Friends school in Media, Pennsylvania. While still in college she began taking part in woman suffrage events, and in 1917 she went to work in New York as a field organizer for the National American Woman Suffrage Association. First sent to Buffalo, where she was recognized as an effective speaker, Pidgeon then went to Auburn and organized events and spoke before numerous groups in the state's Fifth Campaign District. After women won the right to vote in New York in November 1917, the association sent Pidgeon to South Dakota. She made speeches, lobbied politicians, and organized for the South Dakota Universal Franchise League. Women won the right to vote there in a referendum in November 1918.

The association then sent Pidgeon to her native state to work with the Equal Suffrage League of Virginia. It had begun a campaign to sign up as many supporters of woman suffrage in each county and city as the number of men who had voted in each jurisdiction in a recent election (although it is unclear to which specific election they referred) in order to demonstrate statewide support to members of the General Assembly. Pidgeon first worked in the northern counties near where she had grown up, but she also worked in Norfolk and Portsmouth, in eastern Virginia, and made an extended trip in the summer of 1919 to sign up women in the southwestern part of the state between Bristol and Roanoke. Except for a brief mission to North Carolina, Pidgeon worked in Virginia until early in 1920, when the assembly rejected the proposed Nineteenth Amendment. Every few days she wrote and sent detailed reports of her progress to officers of the league, and her article on suffrage work, "From the Virginia Battle Front," appeared in February 1920 in the national journal, Woman Citizen. An energetic and capable canvasser, Pidgeon signed up a great many Virginians in support of votes for women and quickly made friends among the league's officers. She was also thrifty and wrote some of her first reports in Virginia on stationery of the South Dakota Universal Franchise League that she had saved after the conclusion of her work in that state. She later sometimes carried with her a handful of hotel stationery for writing reports as well.

Early in 1920, in anticipation that the Nineteenth Amendment would eventually be ratified (which occurred in August 1920), the Equal Suffrage League cooperated with the Extension Bureau of the University of Virginia to create citizenship schools to educate people about voting and public policy choices. Pidgeon's successful work made her the logical choice as state director, and she began the work with a three-day School of Citizenship at the university on 22, 23, and 24 April. She took the program on the road and conducted sessions in several Virginia towns and cities prior to the election in November. She was among the first women to hold an educational position of any kind at the University of Virginia, and Pidgeon directed the citizenship schools until 1926.

Pidgeon was a member of the steering committee for the formation of the Virginia League of Women Voters in the autumn of 1920 and became involved in state politics. She publicly supported the successful campaign in 1920 to ratify an amendment to the Constitution of Virginia authorizing referenda on proposals to borrow money to construct public highways, and in January 1921 she was the first woman elected a vice president of the Virginia Good Roads Association. In August 1921 she was selected by members to the state central committee of the Democratic Party. In November of that year she helped organize a statewide conference on efficiency in state government, making Virginia one of the first states to do so at the urging of the National League of Women Voters. Pidgeon chaired the Virginia League's department of efficient government for much of the 1920s. Between 1922 and 1926 she published five booklets in the University of Virginia Record: on Virginia election laws, a comparison of convention and primary elections for selecting candidates for public office, Virginia laws respecting women and children, the governor's 1926 proposal to reduce the number of popularly elected state officials from seven to three, and a correspondence course for women's clubs based on her early citizenship schools. Pidgeon also served from 1923 to 1925 as secretary of the influential Virginia Women's Council of Legislative Chairmen of State Organizations (later the Virginia Council on State Legislation), which monitored bills in the General Assembly of special interest to women. She was named executive secretary of the council in February 1928, but did not serve long.

During those same years Pidgeon resumed her education and completed a master's degree in political science at the University of Virginia in 1924 with a thesis entitled, "The Government of the County in Virginia." She studied at Fédération Universitaire Internationale, in Geneva, Switzerland, in 1925 (after she returned home she gave a lecture on the League of Nations for the Richmond League of Women Voters), and in 1926 entered the doctoral program in political science at the University of Chicago. Pidgeon planned to write her doctoral dissertation on the 1927 mayoral election in the city, but in 1928 she moved to Washington, D.C., as assistant editor of the Women's Bureau of the Department of Labor. She was promoted in 1930 to director of the bureau's Division of Research, and during the 1940s she became chief of the bureau's Economic Studies Section. While she was with the Women's Bureau, the nation endured the Great Depression, fought World War II, and adjusted to changed employment patterns afterward. Those events all seriously affected women in the workforce and outside of it. The bureau issued almost 200 official reports as separate issues of its Bulletin of the Women's Bureau during Pidgeon's tenure. She was sole or principal author of about thirty reports on women in various workplace settings.

Soon after Pidgeon moved to Washington she helped organize the Friends Meeting of Washington, of which she was recording clerk for several years. She was also one of two dozen prominent American women from various organizations who in 1936 wrote a women's charter as part of a campaign to secure for women full political and economic equality with men worldwide. Intended as an alternative to the proposed equal rights amendment to the Constitution of the United States and the proposed international Equal Rights Treaty, the charter endorsed legislation to protect women in the workplace, which its supporters feared would be jeopardized by an equal rights amendment. They planned to submit the charter to the League of Nations, but the proposal became tainted with communist associations.

Pidgeon remained in Washington, D.C., from her retirement in 1956 until 1967, when she moved into Friends House, a Quaker retirement community in Sandy Spring, Montgomery County, Maryland. Mary Elizabeth Pidgeon died there of a heart attack on 24 November 1979 and was buried near her parents in the graveyard at Hopewell Meeting (later Hopewell Centre Meeting) in Frederick County, Virginia.