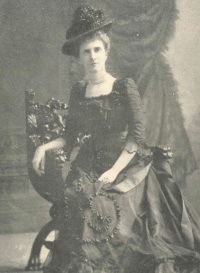 Molly Elliot Seawell (23 October 1853–15 November 1916), author and opponent of woman suffrage, was born in Gloucester County, Virginia, and was the daughter of John Tyler Seawell and his second wife, Francis Elizabeth Jackson Seawell. Her father was a prominent attorney, a nephew of President John Tyler, a pro-secession member of the Virginia Convention of 1861, and a member of the House of Delegates in 1865–1867. The record of her birth in the damaged surviving copy of the county's birth register contains the 23 October date but not the year. The age that her parents provided to census enumerators in 1860 and 1870 and that she or her mother provided in 1880 all indicate that she was born in 1853, and most other nineteenth-century references to her age indicate an 1853 or 1854 year of birth. She contributed to this confusion by providing varying ages when traveling on passenger ships and to the census enumerator in 1910, often suggesting a birth year of 1863 or 1864. Works of reference since the 1890s have almost all included or repeated an erroneous 1860 year of birth. Contemporary Virginians evidently pronounced her surname as Soo-wull or So-wull, but she pronounced it as spelled, Sea-well.

Seawell grew up in the family mansion and read widely in her father's library of classics and reference works. She enjoyed the Romantic poets, but reportedly was forbidden to read nineteenth-century novels. Despite having almost no access to formal education, she nevertheless gained an excellent command of English literature. After her father's death early in 1875, his property had to be sold to pay off his creditors. Seawell moved with her mother and sister to Norfolk and then early in the 1880s to Washington, D.C. They lived in comparatively high style there because Seawell's mother had inherited a large sum of money from her own mother's Baltimore relatives, and Seawell also earned money from her writing. She could afford regularly to spend summers at elegant spas in Europe. She and her sister, Henrietta Seawell, never married and shared a house in Washington with their mother until she died in 1899 and until Henrietta died in 1904.

Author
As a young woman Seawell began writing articles for magazines and newspapers but published them under pseudonyms. About 1888 she began publishing under her own name. Her short 1890 novel Little Jarvis earned her a $500 prize from The Youth's Companion, and her 1895 novel The Sprightly Romance of Marsac won the New York Herald's $3,000 literary prize. Seawell published almost forty volumes and numerous articles on many topics. Her books included several sea adventures intended for boys that may have been inspired by tales she heard from an uncle who served in the United States Navy before the Civil War and in the Confederate States Navy during the war. Little Jarvis was the first of those and like the others emphasized steadfastness of character. Much the same can be said about her other novels, some of which, like The Berkeleys and Their Neighbors (1888), are set in postCivil War Virginia. Seawell's plotlines were relatively simple and character development sometimes slight. Her books were not critically acclaimed, but she had a fluent prose style, and they sold well. For more than twenty-five years, she was a well-known American author. The Sprightly Romance of Marsac and some of her other books were adapted as stage plays, and three were made into silent films. Various publishers kept a considerable number of her novels in print into the twenty-first century.

Seawell's wide reading led her into the study of Christianity and her conversion from the Episcopal Church of her father's family to the Catholic Church. Several of her novels have religion as their central theme. Otherwise, Seawell adhered to the attitudes about society, race, and gender roles she had learned as a privileged Virginia girl in the 1850s and 1860s. In the 28 November 1891 issue of The Critic, A Weekly Review of Literature and the Arts, Seawell published an essay "On the Absence of the Creative Faculty in Women" that generated controversy. She admitted that many women writers and artists had created works of good quality but insisted that "no woman has ever done anything in the intellectual world, which has had the germ of immortality" and that in every field of endeavor the faculty of genius belonged exclusively to men.

Anti-suffragist
It probably did not surprise Seawell's contemporaries that she publicly opposed woman suffrage two decades later. In April 1911 she published a 119-page booklet entitled The Ladies' Battle that opponents of woman suffrage used as a textbook and source for condemning suffragists. Early in 1912 Seawell published two long anti-suffrage articles in the Richmond Times-Dispatch, the first on 25 February, "Why Women Should Not Vote," and the second on 10 March, "Some Problems of Woman's Suffrage," that repeated the arguments in The Ladies' Battle. Seawell stated that in every state that had granted women the vote, women paid higher taxes, could be forced to support their husbands, endured higher rates of illiteracy, poverty, and divorce, were victims of more violence and of saloonkeepers' influence in politics, and were exposed to rampant socialism. She also hinted that woman suffrage could lead to a dangerous return of African American voting. Seawell extended her critique to other countries and condemned militant English suffragists such as Emmeline Pankhurst, whom she characterized as a serial criminal.

Richmond artist and suffragist Adèle Clark, whose endorsement of woman suffrage had stimulated Seawell to publish the first of the two articles, responded on 11 March to Seawell's first essay in the same newspaper. Clark vigorously contradicted both Seawell's numerous assertions or statements of fact and the several premises on which she had grounded her remarks. The Equal Suffrage League of Virginia published Clark's reply as a pamphlet, Facts vs. Fallacies: Anti-Suffrage Allegations Refuted, A Reply to Miss Molly Elliot Seawell (1912). Seawell remained undaunted and in March 1914 published a long article entitled "Two Suffrage Mistakes" in the influential national journal, The North American Review, that contained many of the same arguments as in The Ladies' Battle.

Later Years
By then, fifteen years after the death of her mother and ten years after the death of her sister (to both of whom she had been very devoted), Seawell was lonely, beginning to be isolated from society, and in chronic poor health. She had discontinued her annual trips to Europe, many of which she had taken with her sister. On her birthday in 1913 she noted in her diary, "Today, I begin what I hope will be the last decade of my life." Seawell wrote a will in February 1915 that provided a sum of money for the Sisters of Charity of the Roman Catholic Church in Virginia to endow a facility ("preferably a small hospital") in Gloucester County in memory of her sister and their mother. She also left generous sums to extended family members and employees, including lifetime annuities to a half sister and a cousin and $3,000 for the education of her half nephew's son. She directed that there be no eulogy at her funeral and that no biography—presumably biographical obituary—be published at the time of her death. Molly Elliot Seawell died in her home in Washington, D.C., on 15 November 1916, and was buried near the bodies of her mother and sister in Green Mount Cemetery, in Baltimore.