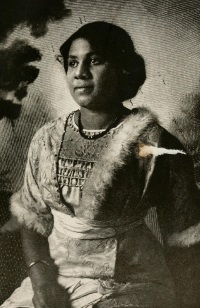 Ora E. Brown Stokes (11 June 1882–19 December 1957), civic leader and social reformer, was born in Chesterfield County, Virginia, and was the daughter of James E. Brown, a Baptist minister, and Olivia Knight Quarles Brown. The official register of her birth gives her first name as Orie without a middle initial, which may have been a mistaken entry for Ora E. She occasionally used the middle initial without indicating what her middle name was, but some other references assign her a middle initial of M. She attended segregated public schools in Fredericksburg, where her father served as pastor of the Shiloh Baptist Church (Old Site). After she graduated from high school at age thirteen, she attended Virginia Normal and Collegiate Institute (later Virginia State University). Trained as a teacher, she graduated in 1900 and taught school for two years in the town of Milford, in Caroline County. She briefly attended Hartshorn Memorial College, a Richmond school for African American women that later became part of Virginia Union University. She served on Hartshorn's board of trustees in the mid-1910s. She took course work in economics and social services at the 1917 summer session of the Chicago School of Civics and Philanthropy (later University of Chicago School of Social Service Administration), and received a B.L. degree from the law department of Virginia Union University in June 1930.

Community Activism
In Washington, D.C., on 9 September 1902 she married William Herbert Stokes, pastor of Ebenezer Baptist Church in Richmond. They had no children but raised an adopted son. She immediately became involved in the church's work, from singing in the choir and helping with the Sunday school to working with the congregation's younger members. She also served as statistician for the Women's Baptist Missionary and Educational Association of Virginia for more than a decade during this period. Ora Brown Stokes, as she was generally known, spent more than thirty years aiding the African American community in Richmond's Jackson Ward neighborhood. Throughout her life, she exemplified her plea to African American women to "place their ears very close to the very heart of social conditions to hear and answer the cry of the needy and depressed," in remarks she made to the Hampton Negro Conference in 1911, the same year she was named to its executive committee.

In 1912 Stokes founded the Richmond Neighborhood Association. Incorporated in 1919, it was a multifaceted social service organization primarily aimed at helping young African American women. It provided funding and staff for child day care, supported a home for African American working girls, supervised food distribution to the needy, and included a sewing department for training in domestic employment skills. In 1916 Stokes formed the National Protective League for Negro Girls to bring young women together through educational opportunities and physical activity to prepare them for community service work. It grew out of a Camp Fire Girls branch she had organized, one of the earliest for African Americans in the South. Within a year, 500 girls were enrolled in thirty-five clubs around the city and were active in a variety of community services. Stokes worked with many of the city's white reformers in numerous endeavors and was recognized by these women and others as a social worker.

Despite this work and her education, in the autumn of 1917 Stokes was denied admission because of her race to the first southern school of social work, the Richmond School of Social Economy (later part of Virginia Commonwealth University). The director informed Stokes that they were willing to offer segregated classes for African Americans, but such a program never materialized. The following year she became the first African American woman probation officer in the city. Stokes held the unsalaried post for about twenty years, supervising African American females through the Juvenile and Domestic Relations Court, whose office was located in the same building as the school that had rejected her application. Between 1922 and 1927 she taught in the sociology department as a nonresident lecturer at her alma mater, known at that time as Virginia Normal and Industrial Institute.

By the 1920s Stokes was sought out in Richmond and across the country to speak on such topics as the welfare of children, racial uplift, political rights, and temperance. During the decade she served as vice president at large of the Virginia State Federation of Colored Women's Clubs, which oversaw a school for African American girls who would otherwise have been sent to prison. She regularly attended biennial conventions of the National Association of Colored Women (later National Association of Colored Women's Clubs), which brought together state and local women's clubs in advocating social and political reforms. Stokes sat on its social service, legislation, and citizenship committees in the 1920s, and served for about a decade as president of the association's southeastern section. In 1922 she organized the association's successful national convention that met at Ebenezer Baptist Church in Richmond. Stokes presided over the opening night rally at the city auditorium with hundreds of delegates and Richmonders in attendance who heard addresses from the mayor, the state attorney general, the governor's secretary, and Maggie Lena Mitchell Walker, a bank president and civil rights activist who was one of the most prominent African Americans in Virginia.

Both white and black Virginians recognized Stokes as a leader in the African American community. The governor appointed her to serve as a field agent for the Virginia War History Commission that gathered documentation of Virginians' participation in World War I. In 1921 she was one of two African Americans named to the women's section of the Virginia Commission on Interracial Cooperation, which opposed lynching and worked to improve housing, educational, and employment opportunities for women and their children. She was elected president in 1924 of the Improved Order of Shepherds and Daughters of Bethlehem, a fraternal organization that Stokes had helped found in 1910 to offer insurance to its members. She expanded its reach into six states and increased membership to 10,000 by 1928.

Voting Rights Activism
After the Nineteenth Amendment guaranteeing women's right to vote was ratified in August 1920, Stokes and Maggie Walker led a voter registration drive for Richmond's African Americans in September. African American women were forced to register in the crowded basement of the city hall, which was open only six hours during the day with few registrars. So many black women came in that many waited all day and still were turned away. Stokes's Richmond Neighborhood Association presented a petition to the city registrar protesting these conditions and offering to provide qualified workers to help register women. The request was denied. On one of the last days to register, an officer of the city's Electoral Board commented to Stokes that there would not be too many black women to turn away at the day's closing. "There's more to come," she replied. "I've got them lined up in Jackson Ward waiting for the word. They are ready to come when I call them." To avoid waiting in the long lines, Stokes and others had organized a phone system to alert women in various parts of Jackson Ward when to go to city hall. Stokes registered on 9 September, one of the 2,410 African American women in Richmond to do so that year.

In February 1921 Stokes identified herself as president of the Negro Women Voters League of Virginia, though its activities remain little known, and it may have had a small membership and a short life. That month she joined delegates from the National Association for the Advancement of Colored People (NAACP) at the convention of the National Woman's Party in an unsuccessful attempt to convince its leaders to urge Congress to address issues of discrimination against women, particularly African Americans, when registering for and voting in the 1920 election. In 1922 Stokes was one of the few African American women who attended the convention of the (white) National League of Women Voters. By invitation she participated in a discussion by the league's Inter-Racial Committee at its 1928 national convention in Chicago and was among the first southern African Americans to take part in such a dialogue with the national league. An active member of the Republican Party, Stokes had become Virginia state chair of the National League of Republican Colored Women by 1924. She and other African Americans publicly complained of the lack of support they received from the local and national Republicans, including poor communication with party leaders (who met in hotels restricted to whites) and a lack of funds to print promotional materials. Despite these concerns, she remained an active member of the party throughout her life. A year before she died, she attended the 1956 Republican Party's national convention in San Francisco as an alternate delegate from Missouri, where she was then residing.

National Activism
Stokes's husband retired from service as pastor of Ebenezer Baptist Church in 1932 and died on 20 July 1936. That year Stokes headed up the women's membership drive for the Richmond branch of the NAACP, and she addressed the annual membership drive meeting in 1937 immediately following NAACP civil rights attorney Thurgood Marshall. From 1937 to 1940 Stokes ran a home for African American boys in Richmond for the Virginia State Department of Welfare. By then her work extended well beyond the state. She attended a conference in 1938 that the National Council of Negro Women organized at the White House to lobby for increased participation by African American women as administrators of federal welfare programs during the Great Depression. In 1940 she moved to Washington, D.C., and began touring the country as a field agent for the National Youth Administration. Stokes inspected projects that it sponsored focusing on educational programs and vocational training for young African American women who sought better employment opportunities. By May 1944 she was acting superintendent of the National Training School for Women and Girls, in Washington, D.C., that Nannie H. Burroughs had established in 1909 to provide vocational education. During the 1940s Stokes served as parliamentarian of the National Council of Negro Women and was a member of its board of directors in the 1950s.

The Woman's Christian Temperance Union appointed Stokes, a lifelong advocate for temperance, its sole African American national field representative in 1944. For more than a decade she toured the nation speaking to hundreds of groups and establishing local chapters. In 1948 alone she traveled more than 15,000 miles while visiting sixty-five locations and holding 251 meetings attended by a total of 19,500 people. Several of the chapters Stokes founded in Virginia and other states were named in her honor. In 1950 she hosted a weekly Sunday radio show entitled "Meet Your Neighbor," on which she discussed temperance and other topics. It was broadcast on KCLO, an African American radio station located in Leavenworth, Kansas.

On 5 March 1948, in Houston, Texas, Stokes married a physician and hospital administrator, John Edward Perry, whose first wife, a granddaughter of Frederick Douglass, had died in 1943. He had helped establish teaching hospitals for African American doctors in the central Midwest and Texas. After their marriage they lived in Kansas City, Missouri. In the last year of her life she was director of the Community Project Contest to Improve Homes and Neighborhoods co-sponsored by the National Association of Colored Women's Clubs and the Sears-Roebuck Foundation. That work required her to travel across the nation evaluating proposed programs. Ora E. Brown Stokes Perry suffered from chronic nephritis and died of a kidney infection at a hospital in Kansas City, Missouri, on 19 December 1957. She was buried in Highland Cemetery in that city.

Image source: A. B. Caldwell, ed., History of the American Negro.

Written for the Dictionary of Virginia Biography by Ray Bonis.