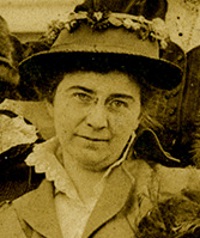 Alice B. Overbey Taylor (28 July 1879–29 December 1919), woman suffrage activist, was born in Charlotte County, Virginia, and was the daughter of Isaac Jechonias Overbey, a businessman, and Ann L. "Nannie" Bouldin Overbey. Her middle initial probably stood for Bouldin; her mother was a daughter of Wood Bouldin (1811–1876), a member of the Convention of 1861 and of the Virginia Supreme Court of Appeals, and a half-sister of Wood Bouldin (1838–1911), a member of the Convention of 1901–1902. She apparently lived with her mother in Mecklenburg County until after her father died in 1902. She then moved to Richmond with her mother and sisters. On 20 September 1909 in Washington, D.C., she married Doward Miles Taylor, of Richmond. They had no children.

From 1913 to 1915 Taylor was executive secretary and office manager of the Equal Suffrage League of Virginia. She held the comparable office in the city chapter of the league and was a prominent participant in the state league's work and conventions. The May 1915 issue of the American Home Journal published her short story entitled "Within the Ring" in support of woman suffrage. With her own resources Taylor financed publication of the eight-page monthly Virginia Suffrage News, which became the official organ of the Equal Suffrage League. With Taylor as publisher and managing editor and Richmond suffragist Mary Ellen Pollard Clarke as editor in chief, they published the first issue in October 1914. It included the text of a speech supporting woman suffrage by Secretary of State William Jennings Bryan, a suffrage essay by novelist Mary Johnston, editorials by Clarke, news from local chapters of the Equal Suffrage League, and reports on activities of suffragists in other states. Over the initials A. O. T., Taylor belittled opponents of woman suffrage, including an unidentified member of the General Assembly.

In the winter of 1914–1915 Taylor suffered an unidentified illness and also lost the source of income with which she had financed publication of Virginia Suffrage News. The paper ceased after a mere three issues. One of Taylor's sisters died in August 1915, and she had to withdraw from active suffrage work for about two years while caring for her mother. By the time Taylor was able to resume working for woman suffrage Edith Clark Cowles, an able organizer, held her former job as the league's office manager and secretary. With the entrance of the United States into World War I in the spring of 1917, the league added work to support the war effort to its agenda. President Lila Meade Valentine appointed Taylor chair of the league's Committee of Agriculture and Thrift. It promoted vegetable gardening to provide food for soldiers and civilians. Taylor was also chair of the league's Committee for the Protection of Women's Labor in 1918.

Taylor continued to wield her pen. In August 1918 she published in The Woman Citizen, a short poem she identified as from a wounded soldier but which she probably composed. In imitation of John McCrae's popular new "In Flanders Fields," it honored the civilian services of women during the war. The following January, Taylor responded in The Woman Citizen with trenchant verse to an assertion in a Richmond newspaper that American Democracy created wide opportunities for all classes of citizens. She concluded,

There're chances for the man in old Virginia
Who seeks them with the ballot in his fist.
But I resent like hades
The status of the ladies
Who politically simply don't exist.

In January 1919 Taylor was named program chair for the Richmond chapter of the Equal Suffrage League. That summer her doctor diagnosed her with cancer. Alice B. Overbey Taylor died at her home in Richmond on 29 December 1919 and was buried in Woodland Cemetery in Chase City, in Mecklenburg County, near her father. Her husband's body was buried there following his death almost twenty years later.