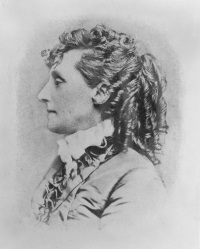 Elizabeth L. Van Lew (15 October 1818–25 September 1900), espionage agent and postmaster of Richmond, was born in Richmond and was the daughter of John Van Lew, a native of Long Island, New York, and Eliza Louise Baker Van Lew, a native of Philadelphia, Pennsylvania. Her middle initial possibly stood for Louise, like her mother. Her father was a prosperous hardware merchant until his death in 1843. She attended a local academy before being sent to Philadelphia to complete her education. The family lived in a mansion in Richmond's elegant Church Hill neighborhood, attended historic Saint John's Episcopal Church, and made every effort to assimilate fully into southern society, acquiring as many as twenty-one enslaved laborers by 1850. At the same time, Van Lew and her mother privately lamented the evils of slavery and hoped that through individual acts of manumission they could contribute to the gradual erosion of slavery. They supported African colonization, the controversial movement to deport blacks to Liberia. Van Lew secretly freed some of her slaves or allowed them to live as if free, but her family had de jure ownership of at least a half dozen people well into the Civil War.

Civil War Begins
Secession represented for Van Lew both a catastrophe and an epiphany. By the eve of the Civil War, she had concluded that slavery had made Southern whites anti-democratic, coercive, and arrogant. She embraced abolition after secession dashed her hope that the white South might reform itself. Van Lew chose to stay in Richmond during the war, even though she could have easily gone to relatives in the North. She believed that she had a responsibility to her fellow Virginians, particularly African Americans in her orbit. Van Lew did not see herself as someone who betrayed the South; rather she believed that secessionists and Confederates were the traitors to Virginia's heritage of political moderation.

During the first two years of the war, Van Lew aided Union officers in nearby Libby Prison, helping them to survive and to escape by claiming that her ministrations to the soldiers were acts of charity in keeping with the female imperative of benevolence. She relied on her family's wealth to bribe Confederate prison guards and officials, as well as her family's social standing, which she parlayed into numerous favors from influential Confederates, including the provost marshal. After Jefferson Davis imposed martial law on Richmond on 1 March 1862—a measure that led to the arrests of dozens of suspected Unionists—Van Lew could no longer visit Union prisoners.

The Richmond Underground
Under Van Lew's leadership, the clandestine interracial spy network, referred to as the Richmond underground, managed to evade scrutiny and step up its efforts on behalf of Union prisoners, as well as to help civilians flee the Confederacy and find refuge in the North. Richmond Unionists worked with Van Lew to provide escapees with safe houses, with passes and disguises, and with guides and contacts to take them to Union lines. Her family mansion proved a safe way station for fugitives on the perilous journey beyond Confederate lines.

The most fabled of Van Lew's African American co-workers was Mary Jane Richards. Rumors began circulating after Van Lew's death that during the war she had planted an African American servant named Mary Bowser as a spy in the Confederate White House. Mary Bowser was an alias for Mary Jane Richards, whom the Van Lews had sent north to be educated, then to Liberia, before having her brought back to Richmond on the eve of the war. Richards used a series of aliases to avoid detection by the authorities. The most revealing piece of evidence on Richards's wartime exploits is a newspaper article covering a speech she gave in September 1865 at New York's Abyssinian Baptist Church. Published in the New York Anglo-African under the title "Richmonia Richards," the article credits Richards with having gone "into President Davis's house while he was absent, seeking for washing," and making her way into a "private office" where she "opened the drawers of a cabinet and scrutinized the papers."

Beginning in the winter of 1863–1864, Van Lew's own double life became considerably more risky after Major General Benjamin F. Butler enlisted her and her fellow Unionists into Federal service. The Van Lew mansion became the nerve-center of the Richmond underground network, reaching beyond the city and into the neighboring counties. Best described as a spy-master, Van Lew oversaw and deployed a devoted group of operatives who practiced a primitive but effective spy tradecraft, using code names and invisible ink and carrying messages hidden in their shoes and clothing.

The work had profound strategic and symbolic significance for the Union war effort. In the last year of the war, as General Ulysses S. Grant struck blows at the Confederate trench line that reached from Petersburg to Richmond, the Richmond underground furnished Grant with key insights about the movement of men and supplies between Confederate forces in the East and in the Shenandoah Valley. Van Lew's network helped prepare for critically important offensives, such as the assault on Chaffin's Farm, which resulted in the capture of Confederate Fort Harrison. Unionists' reports from the last year of the war provide a picture of increasing desolation and demoralization in the rebel capital. This kind of information confirmed for Grant that his grand strategy of attrition was working.

The two most dramatic feats of Richmond's Unionists were the February 1864 escape of 109 Union officers from Libby prison and the April 1864 reburial on Federal soil of Ulric Dahlgren, a slain Union army colonel who had been killed leading a failed raid on Richmond. The latter was referred to as the "Great Resurrection" after Dahlgren's body was discovered missing when Confederates tried to return it to Federal authorities, at the request of Dahlgren's father. The chief of military intelligence for the Army of the Potomac, George H. Sharpe, penned a forceful summary of Van Lew's significance to the Union war effort. He wrote in a postwar letter that "for a long, long time, she represented all that was left of the power of the U.S. Government in the city of Richmond."

Van Lew ranks with Major General George Henry Thomas, abolitionist Moncure Daniel Conway, and politician Waitman Thomas Willey among Virginia's most significant Unionists. With her agents traveling to and from her house with dispatches and orders, her family was vulnerable to exposure. A moment of reckoning came in September 1864 when Confederate authorities launched a formal investigation of Van Lew. Charles Minor Blackford of the adjutant general's office concluded from his investigation that "Miss El. Van Lew of this city is very unfriendly in her sentiments towards the Govt.," but he reported that "it does not appear that she has ever done anything to infirm the cause" beyond having "talked freely" of her opinions among her friends. The ultimate finding in her case was, "no action to be taken." The men whose job it was to root out disloyalty were blinded by sexism to the possibility that a frail spinster lady could be capable of politically significant acts of disloyalty. When the United States Army entered Richmond in April 1865 Van Lew felt personal vindication. "Oh, army of my country," she confided to her journal, "how glorious was your welcome!"

Postmaster of Richmond
Van Lew's financial condition suffered as a result of the war, and she sought a position with the Bureau of Refugees, Freedmen, and Abandoned Lands (commonly known as the Freedmen's Bureau), where she worked as a clerk in 1868. The story of Van Lew's wartime exploits first became widely known when President Grant appointed her postmaster of Richmond in the spring of 1869. White Richmonders railed against the appointment of a female spy to the postmastership. In her eight years in office (she served from 19 March 1869 to 19 March 1877 and insisted on being referred to as postmaster rather than postmistress), Van Lew tried to project a public image of fairness and efficiency. At the same time, she adopted the mantle of truth-teller on the subject of race relations and informed the northern press about the repressive treatment of blacks in Richmond. Neither the white Republicans whom she sought to represent nor the white Democrats whose policies she opposed were willing to concede Van Lew's competence and rationality. Only the city's African Americans and a small cadre of white progressives were willing to honor her, as she made the unprecedented move of hiring blacks and women to work in the post office and of using her office as a bully pulpit for the cause of civil rights and woman suffrage.

The Myth of "Crazy Bet"
In 1883 she secured an appointment as a clerk in the postmaster's office in Washington, D.C., but resigned in July 1887 after being demoted. White men across the political spectrum alleged that Van Lew was erratic and hysterical and the backlash against her office-holding inclined some white Richmonders to regard Van Lew in her old age as crazy. In her waning years, Van Lew was so estranged from white Richmond that it was all too easy to mistake her alienation for a kind of madness. The myth of her madness took on a new life after her death when Van Lew's executor, John P. Reynolds Jr., published a series of notices in newspapers around the country describing how "Crazy Van Lew" fooled the Confederacy into letting her enter Libby Prison to aid Union soldiers there. The claim became a staple of Van Lew lore, and her biographers passed it down until Van Lew became synonymous with "Crazy Bet." According to this lore, Van Lew avoided detection during the war by crafting a reputation as an imbalanced and therefore essentially harmless eccentric old spinster. Many a treatment of Van Lew has suggested that the role of "Crazy Bet" came easily to her because she was in fact an odd and eccentric woman. Not one of the four daily Richmond newspapers, however, hinted at mental instability in the obituaries they published, although two of them printed very unflattering caricatures of her.

Interestingly, at the very same time the press was circulating stories of "Crazy Bet," her oldest friend, fellow Unionist, longtime neighbor, and co-worker in the post office, Eliza Griffin Carrington Nowland, was trying in vain to publish her own account of Van Lew's life. "In a few brief pages I propose to portray the patriotic and philanthropic characteristics of Elizabeth L. Van Lew," her manuscript begins. "Possessed of a logical mind," Carrington continued, Van Lew "believed slavery to be a blot on the nation.…When Patrick Henry stood in historic old St. John's Church and shouted 'Give me liberty or give me death,'…. Elizabeth Van Lew's heart caught up the refrain and cried 'Give them liberty or give me death.'"

She never married and did not have any children, although two of her nieces grew up at the Van Lew mansion, one of whom she considered like a daughter. After an illness of several months, Elizabeth L. Van Lew died at her home in Richmond on 25 September 1900 and was buried in the city's Shockoe Hill Cemetery.

Written for the Dictionary of Virginia Biography by Elizabeth R. Varon.