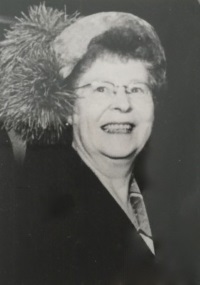 Lillie Mary Barbour (3 March 1885–18 May 1985), woman suffrage activist and labor advocate, was born in Rocky Mount, Virginia, and was the daughter of James Randolph Barbour and Abigail Adeline Ferguson Barbour. Little is known about her youth or education, although she likely attended the local public schools. By 1908 Barbour had moved to Roanoke, where she joined the Local Union No. 48 of the United Garment Workers of America. She served as secretary of the union, which was described as one of the best organized in the city, until about 1911. Barbour was often a delegate to the annual meetings of the Virginia Federation of Labor. At its 1910 convention she was a member of the Strikes and Labels Committee and made an impassioned plea for federation members to support garment workers by buying only union-made clothing.

Suffrage Activist
About that same time Barbour signed a petition calling for an amendment to the state's constitution to give women the right to vote. She began speaking to local unions about the importance of woman suffrage in the campaign to obtain better working conditions. In April 1913, Barbour wrote to Equal Suffrage League of Virginia president Lila Hardaway Meade Valentine to inform her that she had arranged for Valentine to speak to a group of garment workers in Danville. Barbour joined other suffragists who spoke before the House of Delegates' Committee on Privileges and Elections in favor of woman suffrage on 12 February 1914, but they could not secure enough votes to pass a suffrage amendment. During the next several years she addressed suffrage meetings around the state about labor issues related to women and children, arguing that "the ballot in our hands is the only thing to help us." Believing that education could also help improve conditions for working women, Barbour supported the Co-Ordinate College League of Virginia's efforts to establish a women's college at the University of Virginia. In 1917, while serving on the Equal Suffrage League's vigilance committee, she was described as "instrumental" in securing the Virginia Federation of Labor's endorsement of woman suffrage at its convention.

Labor Advocate
During this time Barbour joined the state's Bureau of Labor as a factory inspector. She traveled across Virginia, inspecting factories, workshops, and mercantile establishments for violations of state laws related to safety, sanitation, and the labor of women and children. In a three-month period during 1914 she cited more than 100 employers for a variety of violations. Barbour remained active with the Virginia Federation of Labor and was secretary of its legislative committee in 1915–1916, when the federation successfully lobbied the General Assembly for a fire escape bill, pensions for retired and injured first responders, and a bill to provide for female police officers in larger cities. The governor appointed her one of five state delegates to the National Child Labor Convention in 1915. In April 1917 Barbour was the only woman named to the new Virginia Industrial Council of Safety, which was tasked to investigate conditions contributing to the exodus of African American workers to the North.

Barbour became an inspector for the United States Children's Bureau about 1917. She visited workshops, canneries, shipyards, mills, and factories around the country to ensure compliance with the 1916 Keating-Owen Child Labor Act. After it was declared unconstitutional, she joined the Internal Revenue department as a tax inspector, still focusing on child labor. While chairing a session on child labor at the 1922 convention of the Association of Governmental Labor Officials of the United States and Canada, Barbour declared that there were too many violations because no state "has the proper facilities for enforcing every section of its law for the protection of children." After visiting Cuba early in 1921, she was elected state organizer for the Virginia Federation of Labor. The following year Barbour traveled as far as Louisiana to organize women workers.

Later Years
By 1924 Barbour moved to Reno, Nevada. She continued her labor activism and won election as secretary-treasurer of Nevada State Federation of Labor and served for more than eight years. On 15 July 1925 she married Joseph Bernard Clinedinst, who been her fellow factory inspector in Virginia before he divorced his first wife and moved to Nevada, where he operated a mine and became the state's labor commissioner before his death on 3 January 1946. She was state secretary of the Nevada League of Women Voters, was elected a delegate to Nevada's convention called to repeal the Eighteenth Amendment in 1933, and mounted an unsuccessful campaign for the state assembly in the 1944 Democratic primary. She remained active in civic matters, serving as a district president of the local American Legion Auxiliary in the 1940s and as president of the Reno Women's Civic Club in the 1960s. Lillie Mary Barbour Clinedinst returned to Virginia prior to her death from a heart attack at a Roanoke nursing home on 18 May 1985. She was buried in Mountain View Cemetery in nearby Vinton, in Roanoke County.