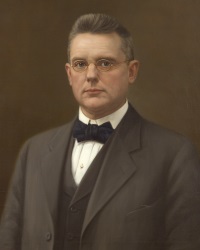 Richard Evelyn Byrd (13 August 1860–23 October 1925), Speaker of the House of Delegates, was born in Austin, Texas, the son of William Byrd (d. 1898) and Jennie Rivers Byrd. He was named for his grandfather, Richard Evelyn Byrd (1801–1872), a Winchester attorney and member of the Convention of 1850–1851. William Byrd served as adjutant general of Texas during the first part of the Civil War and then joined the Confederate army and was taken prisoner. After the war the family moved back to Virginia and settled in Winchester. Richard Evelyn Byrd grew up there and went to school at Shenandoah Valley Academy. Following his education at the University of Virginia and subsequent receipt in 1882 of a degree from the University of Maryland School of Law in Baltimore, he returned to Winchester. Byrd was admitted to the bar in 1884 and later the same year won election as commonwealth's attorney of Frederick County, a post he held for twenty years.

On 15 September 1886 in Martinsburg, West Virginia, Byrd married Eleanor Bolling Flood, of Appomattox, whose political lineage influenced his future. Her grandfather Charles James Faulkner (1806–1884) had been minister to France and a Virginia congressman; her uncle, the younger Charles James Faulkner (1847–1929), had been a United States senator from West Virginia; and her brother, Henry DeLaWarr "Hal" Flood, served in the House of Representatives from 1901 to 1921. Their three children, Harry Flood Byrd (1887–1966), Richard Evelyn Byrd (1888–1957), and Thomas Bolling Byrd—Tom, Dick, and Harry, in reverse order—became a businessman and politician, an aviator and polar explorer, and a lawyer and orchardist.

Early Career
Byrd enjoyed a legendary reputation as a lawyer. His love of books and a photographic memory supported legal arguments that he delivered with persuasive oratory, clarity of reasoning, fluent diction, and humor and wit. A stockily built man of average height, Byrd had the high family forehead, a determined chin, and penetrating eyes; only the spectacles disguised an aggressive, short-tempered character that made him a fearless and pugnacious competitor in the courtroom. When not meeting the demands of public office he invested in local businesses and practiced law in partnership with the future congressman Thomas Walter Harrison. They took cases from rich and poor alike regardless of their ability to pay. In Winchester Byrd was known as Mr. Dick and regarded as a friend of the underdog and of children, to whom he frequently dispensed candy on the streets.

Speaker of the House of Delegates
Hal Flood drew Byrd into the inner circle of the Virginia Democratic Party, which was dominated early in the twentieth century by the political machine of Senator Thomas Staples Martin, to whom Flood was a key adviser. Byrd served on the Democratic State Central Committee and in 1905, probably at the urging of Flood, won a seat representing Winchester and Frederick County in the House of Delegates. In the ensuing January–March 1906 legislative session he sat on the Committee on Finance and chaired the Committee for Courts of Justice. Shockingly for one with so little seniority, Byrd was elected Speaker of the House two years later and held that position for six years, a tribute to his popularity in the assembly and to his standing with the leaders of the Martin machine, who did not often reward newcomers or inept leaders and whose skillful use of the powerful Speaker's office helped the Martin machine to influence crucial legislation and House procedures.

Byrd initiated two statutes bearing his name that furthered the interests of the machine. Although he was himself very far from being a teetotaler, in 1908 he sponsored a bill to restrict the liquor traffic in areas lacking police protection. Its passage revealed a tacit alliance between Martin and James Cannon, the Methodist minister who was Virginia's leader in the fight for Prohibition. Byrd's bill prevented a potentially divisive political struggle. Byrd and Martin supported statewide Prohibition when it was approved in 1914. In 1912 Byrd introduced a bill that made state regulation of party primaries mandatory. He also served on the State Education Commission from 1908 to 1912 and the Special Tax Commission from 1910 to 1912.

Byrd's abilities and fairness as a legislative leader won him the admiration of his peers and the gratitude of the organization leadership, but party regularity did not come at the expense of political independence. When his longtime friend from college days, Woodrow Wilson, announced his presidential candidacy in 1912, Byrd quickly rallied to his side in spite of Martin's opposition to Wilson and the prominence of several antimachine leaders in the Wilson campaign. At the state Democratic convention Byrd engineered a compromise that prevented the Virginia delegation to the national convention from uniting behind any one candidate. The Wilson forces were in a minority in the seriously divided Virginia delegation. Byrd successfully maneuvered to prevent the unit rule from being enforced until it became clear that Wilson would win the nomination in any event.

U.S. Attorney
Byrd's early support naturally made him a key consultant to the new president on patronage appointments in Virginia, and his continued allegiance to the machine likely ensured that Martin's faction was amply rewarded in spite of its initial opposition to Wilson. The president appointed Byrd the United States attorney for the Western District of Virginia. He held that office from 1914 to 1920, after which he served as a special assistant to the United States attorney general for several months at the end of Wilson's second term.

Later Years
Byrd maintained his private law practice during Wilson's presidency and resided primarily in Richmond. He also served on the state's Commission on Economy and Efficiency from 1916 to 1918 and chaired the State Industrial Council of Safety during World War I. A lifelong Episcopalian and a member of the Commonwealth and Westmoreland Clubs, Byrd was also a key adviser and confidante of his son Harry Flood Byrd (1887–1966), who rapidly rose to political prominence at the beginning of the 1920s. He participated strenuously in his son's 1925 gubernatorial campaign by giving speeches and cajoling old friends in the party machine. Worn out from a successful primary effort, Richard Evelyn Byrd died in Richmond on 23 October 1925 after almost a month of hospitalization, only days before the general election that propelled his son into the governor's mansion. He was buried in Mount Hebron Cemetery in Winchester.

Written for the Dictionary of Virginia Biography by Ronald L. Heinemann.