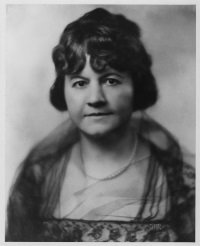 Ellen Anderson Gholson Glasgow (22 April 1873–21 November 1945), novelist and woman suffrage advocate, was born into a prominent Virginia family in Richmond and was a younger daughter of Anne Jane Gholson Glasgow and Francis Thomas Glasgow, an executive at the city's Tredegar Iron Works. Until middle age or later, Glasgow believed that she had been born in 1874, but later learned from the family bible that her year of birth was 1873; but she did not celebrate birthdays, including her own, and therefore the discrepancy did not concern her. Educated at home, she became alienated from her stern father, and after the death of her mother in 1893 and her brother-in-law and mentor George Walter McCormack by suicide in 1894, suffered through a period of depression and began to lose her hearing. Glasgow read widely and developed a broad perspective on universal human experiences that was reflected in her novels. She became a feminist who advocated equal opportunities for women but also urged women to create cooperative networks among themselves and to discover and develop their talents and abilities beyond societal expectations.

Glasgow did not marry after an early romance with a man who died. Richmond lawyer Henry Watkins Anderson later proposed to her, but she did not accept, although they remained friends. Glasgow began writing early in life. In 1897 she anonymously published her first novel, The Descendant, which was well received. Glasgow soon began a series of novels depicting the social and political upheaval in Virginia after 1850. The series, published under her name, included The Battle-Ground (1902), her only novel depicting the Civil War, The Deliverance: A Romance of the Virginia Tobacco Fields (1904), about class conflicts in the war's aftermath, and Virginia (1913), whose namesake character finds herself unable to adapt to changing gender roles at the turn of the twentieth century. By the 1910s Glasgow was one of the most successful woman novelists in the country.

In 1909 Glasgow and her sister Cary Glasgow McCormack visited England, where Glasgow became acquainted with militant suffragists and intellectual feminists as well as some of the leading writers and intellectuals of the age. On their return to Richmond, the sisters joined Lila Hardaway Meade Valentine and other like-minded women in November 1909 to establish the Equal Suffrage League of Virginia to work for women's voting rights by means of an amendment to the state constitution. Glasgow declined accepting any leadership role in the league, but the founders elected her an honorary vice president. At one of the league's first meetings, she described her exasperation at a reporter's statement that female strikers at shirtwaist factories in New York City were treated differently from striking men because the women could not vote, and also expressed her hope for improvement in women's status as they united around the world. Unlike most league members, Glasgow refused to condemn the violence of the British suffragists despite her view that violence rarely solved problems.

Her favorite brother Frank Glasgow died by suicide in 1909 and Cary McCormack, the sister to whom she was closest, died following a long illness in 1911. Glasgow moved to New York City, where in May 1912 she and novelist Mary Johnston marched with several other Equal Suffrage League members who carried a Virginia flag in a suffrage parade. Although Glasgow took a less active part in the campaign for women's voting rights in Virginia, she supported the Equal Suffrage League when she could. A Richmond newspaper reported in April 1913 that she had "made a brilliant and humorous address…winning a large number of new names for suffrage" when she spoke in Norfolk. Later that year, in one of her first public speeches in Richmond, Glasgow spoke on behalf of the league, explaining to the audience that "a banner floating from a flagpole does not make a republic. Until woman is given a voice in making the laws she obeys, there can be no real democracy." She contributed an autographed book to a 1914 sale at a Richmond store that displayed yellow suffrage banners to raise funds both for the league and for the Red Cross. She supported the publication of a special newspaper issue that the Equal Suffrage League produced in conjunction with a rally at Capitol Square on 2 May 1914. From time to time, she attended board meetings and annual conventions of the league, including in 1919 when she spoke about its founding. Late in life, artist and fellow suffragist Adèle Clark recalled how Glasgow had introduced her to the movement by way of signing a petition supporting votes for women. In an interview with a New York Times reporter, Glasgow explained that "opposition to suffrage, in this country at least, is all emotional…. In fact, there is not a single valid reason that I have ever heard against giving votes to women." Indeed, she argued that "women of the South are probably more fitted for the ballot than any other American women," and described the right to vote as one part of a larger feminist movement that offered women equality of opportunity.

Throughout her career, Glasgow published twenty novels, several of which were best-sellers. Barren Ground (1925), with its grimly tragic theme set in rural Virginia, received critical acclaim as did Vein of Iron (1935), which traced four generations of a family of strong-willed women. Glasgow examined the decay of southern aristocracy and the trauma of the intrusion of modern industrialism in a trilogy that included The Sheltered Life (1932), often considered her finest work. In 1940 she received the Howells Medal of the American Academy of Arts and Letters. Glasgow's last novel In This Our Life (1941) earned her a Pulitzer Prize in 1942. Her memoirs were published posthumously as The Woman Within (1954). In This Our Life was made into a feature film released in 1942 and "The Shadowy Third," a short story first published in 1916, was twice made into television episodes. Some of her books remained in print into the twenty-first century.

A lifelong animal lover, she directed a reorganization in 1924 of the Richmond Society for the Prevention of Cruelty to Animals, of which she had been a member since 1895, and served for many years as president. Ellen Anderson Gholson Glasgow died at her Richmond home of a coronary thrombosis on 21 November 1945 and was buried in Hollywood Cemetery. After she made provisions for her secretary and longtime companion, Anne Virginia Bennett, and for the care for her beloved dog, Bonnie, the bulk of Glasgow's estate was left to the Richmond SPCA. Her Richmond house, an antebellum Greek Revival–style mansion at 1 West Main Street where she had lived most of her life after her father bought it in 1887, was designated a National Historic Landmark in 1971.

Written for the Dictionary of Virginia Biography by Barbara C. Batson.