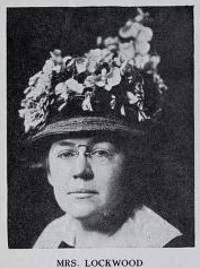 Mary Morris Hall Lockwood (28 February 1871–19 April 1936), woman suffrage activist and association leader, was born in New Jersey or possibly in Philadelphia where her parents, John Rhodes Hall and Elizabeth Baker Hall, lived. Little is known about her youth or education. She attended school in Philadelphia and later at a female academy in Charlotte, North Carolina, where she married Henry Lockwood on 13 May 1889. They settled in Washington, D.C., and he worked for the Washington Gas Light Company. They had two sons, one of whom died in infancy.

Woman Suffrage Activist
In 1904 they moved to their new home Kirkwood, in the Clarendon neighborhood of Alexandria County (Arlington County after 1920), where by the end of the decade she had helped establish Saint George's Episcopal Church. In 1912 Mary Morris Lockwood, as she was generally known, accepted the presidency of its women's auxiliary in order to "illustrate that a woman who believes in equal suffrage may remain a churchwoman and still have time to attend to her domestic duties." By the spring she had organized a local branch of the Equal Suffrage League of Virginia and was corresponding with the league's secretary to arrange potential speaking engagements in the area for league president Lila Hardaway Meade Valentine and novelist Mary Johnston. Soon Lockwood instead became involved with the nascent Congressional Union for Woman Suffrage (later the National Woman's Party). Chaired by Alice Paul, the Congressional Union advocated an amendment to the United States Constitution. Although it was originally affiliated with the National American Woman Suffrage Association, which favored amending state constitutions to allow woman suffrage, the two organizations soon separated. In April 1913 Lockwood participated in the Congressional Union's march to the U.S. Capitol for the opening of a special session of Congress, and in May she participated in a suffrage parade in New York City. She took over the office of treasurer that summer, and her pleas for donations to fund the Congressional Union's activities, the publication and printing of suffrage literature, and the expansion of its headquarters regularly appeared in The Suffragist until she retired in May 1914.

Like other Congressional Union officers, Lockwood believed that "constant agitation" would force legislators to pay attention, and she helped organize and participated in events to promote woman suffrage throughout the decade. By December 1913 she had established a Congressional Union branch in Arlington, and after the state branch was organized in 1915 she became chair of the Eighth Congressional District. She chaired a committee that organized public luncheons at a Washington, D.C., restaurant in October 1913 to show that women who supported suffrage were capable of preparing meals for their families. She helped organize marches to the Capitol and the White House to present petitions to members of Congress and to President Woodrow Wilson. She raised money for the suffrage cause, holding a dance fund-raiser at her home in May 1914 and organizing a Woman's County Fair at a nearby estate the following summer. She regularly lobbied legislators as well. In 1914 Lockwood accompanied Virginia Congressional Union chair Sophie Gooding Rose Meredith and vice chair Pauline Colclough Forstall Adams to the Capitol in a car decorated with suffrage banners to urge the chair of the Rules Committee of the U.S. House of Representatives to support a federal suffrage amendment. In 1915 and 1916 Lockwood led multiple delegations of women who attempted to convince Virginia representative Charles Creighton Carlin, who then chaired the subcommittee that kept the suffrage amendment from a vote, that his constituents favored voting rights for women. Lockwood was one of the pickets who carried banners at the White House in August 1917 and was arrested. She did not serve time in prison and was among a group of suffragists who successfully sued the District of Columbia to have their arrests and convictions overturned.

After ratification of the Nineteenth Amendment in 1920, she joined the Republican Party. At a convention on 1 September 1921, local Republicans nominated Lockwood for the seat in the House of Delegates representing Alexandria City and Arlington County, but she lost in the November election by a vote of 2,338 to 919. She did not run for the assembly again. She remained active in the National Woman's Party as chair of the Eighth Congressional District and in the 1920s lobbied members of Congress for an equal rights amendment.

Women's Club Work
While continuing to fight for suffrage, Lockwood was also involved with the woman's club movement. Between 1918 and 1920 she served as director at the Washington, D.C., headquarters of the General Federation of Women's Clubs, overseeing the office and monitoring legislation of interest to women. In September 1920 she was elected founding president of the Arlington County Federation of Women's Clubs and by the end of the year had become vice president of the North Virginia District Federation of Women's Clubs. On 5 May 1921 the Virginia Federation of Women's Clubs elected Lockwood to a two-year term as president. During her tenure, the federation established a state bureau of information and focused on education issues and aid for disabled children. She testified in July before a congressional committee regarding a bill to protect the health of mothers and infants and in August she was named to a state committee to study ways to improve living conditions in rural Virginia. As president of the state federation she attended the 1923 Women's Industrial Conference that had been called by the Women's Bureau of United States Department of Labor, where she supported a national minimum wage.

In Arlington County Lockwood continued her interest in public health issues and chaired the central committee of the county's Mothers Health League. She was involved with developing a public library in the county and as president of the Arlington District Library Board in 1930 worked towards securing a larger building to hold its expanding collection. Poor health forced her to retire from activism about 1932. Mary Morris Hall Lockwood died of a cerebral hemorrhage on 19 April 1936 in Arlington and was buried at Oak Hill Cemetery, in Washington, D.C., with a gravestone inscription, "Leader in Woman Suffrage."