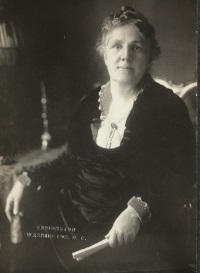 Sophie Gooding Rose Meredith (12 December 1851–27 August 1928), woman suffrage activist, was born in New Bedford, Massachusetts, and was the daughter of Sophia Gooding Barker Rose and John Rose, a partner in a cloth import and wholesale firm in Baltimore, Maryland. Her father died in 1853, and her mother took her and her sister back to New Bedford, where they lived for more than a decade with Abraham Barker, her maternal grandfather and a Quaker businessman. She spent her formative years there and was educated in the Quaker values of racial and gender equality and peace. After her mother married Rose's former business partner in 1866, they returned to Baltimore. On 26 April 1877, in Baltimore County, Sophie Rose married Charles Vivian Meredith, a Richmond lawyer who later served for more than a decade as city attorney and was a member of the Convention of 1901–1902. They had three daughters, one of whom died in childhood, and one son.

Concerned about the condition of public schools in the city, Meredith joined the Richmond Education Association, which was founded in 1900 to work for improvements at schools for white and African American students. From 1906 to 1911 she chaired its School Visiting Committee, a group of twenty women who regularly visited the city's schools and called attention to overcrowding, poor facilities, and the need to raise teachers' salaries. In 1911 Meredith began a two-year term on the executive committee, although by that time she was focused on securing voting rights for women.

Early in 1909 she helped circulate a petition in support of woman suffrage, and that November Meredith played a conspicuous role when she and about twenty other socially prominent Richmond women founded the Equal Suffrage League of Virginia. Earlier attempts to form a woman suffrage organization in Virginia were not successful, but Meredith, novelists Mary Johnston and Ellen Glasgow, and social reformer Lila Hardaway Meade Valentine succeeded in bringing the idea of woman suffrage forward in Richmond. Meredith believed that "morality is the heart of woman suffrage" and referred to the suffrage movement as being for "Purity, Justice, helpfulness & Truth." As did many other Virginia suffragists, she believed that if women had the vote, they could elect legislators to pass laws that would make the world a better place for men, women, children, and families.

One of the league's vice presidents from its founding until 1915, Meredith initially chaired its lecture committee and later its publication and finance committees. Suffragists proselytized by making speeches, arranging lectures by speakers from outside Virginia, distributing suffrage literature, and writing for publication as well as lobbying and petitioning legislators. An undated incomplete report Meredith made to the league about 1913 contains a list of events and speakers in Richmond and records meetings to organize the city's women in four of its wards to distribute literature, procure signatures on petitions, and reach working women in the city's factories.

In March 1913 Meredith and other league members participated in the national suffrage parade in Washington, D.C., organized by Alice Paul, also a Quaker and then chair of the National American Woman Suffrage Association's Congressional Committee and later founder of the Congressional Union for Woman Suffrage. At the end of the year Meredith attended a suffrage school in Washington, where she received training in parliamentary law, public speaking, and how to lobby legislators. Despite the league's intense lobbying, organizing, and educating, members of the all-male General Assembly defeated proposals in 1912, 1914, and 1916 to amend the state constitution. The slow process of amending the state constitution discouraged Meredith and some other Virginia suffragists. She came to believe that Virginia's legislators would never submit a suffrage amendment to the voters and joined with Paul to focus instead on amending the Constitution of the United States to grant all American women the right to vote.

A majority of Equal Suffrage League members and officers continued to work for a state amendment, in part because they feared that powerful advocates of states' rights in Virginia would never ratify a federal amendment. When Meredith organized the Virginia branch of the Congressional Union (renamed the National Woman's Party in 1917), however, some league members joined her. At its founding meeting on 10 June 1915, Meredith became chair of the Virginia branch. Pauline Forstall Colclough Adams, founding president of the Norfolk Equal Suffrage League, became first vice chair and Elizabeth Dabney Langhorne Lewis Otey, whose mother was vice president of the state league, became second vice chair. State membership at the end of the year was 127, but during the next three years it grew to more than 500, far short of the number of members the Equal Suffrage League then had in the state.

Valentine feared that Meredith's organization would undermine the league's work and she publicly condemned the Congressional Union's confrontational tactics. Meredith and her members not only lobbied the state's congressmen and senators for a federal amendment, but also beginning in 1917 they took part in picketing the White House and protesting Congress's refusal to vote on the proposed amendment. Meredith was among the first group of pickets who stood with banners criticizing President Woodrow Wilson in January 1917, and she organized a day of Virginia pickets with about a dozen of her branch members. In August 1918 Meredith was arrested, possibly as many as four times, for demonstrating in Lafayette Park, across Pennsylvania Avenue from the White House, when the Senate refused to vote on the suffrage amendment. Faced with the choice of being fined or sent to jail, Meredith yielded to her family's wishes and allowed them to pay a fine rather than risk her health in jail. Then in her mid-sixties, she was among the oldest of the women arrested during the Washington demonstrations. Her daughter explained why the family wanted to pay her fine, because "It is better to be a live suffragist than a dead one."

When Congress finally passed the amendment and sent it to the states for ratification in 1919, Meredith and other National Woman's Party members tried without success to persuade the assembly to vote on the amendment during a special session in August 1919. Valentine and the Equal Suffrage League preferred to wait until the regular session the following winter, but Virginia's legislators refused to ratify the amendment at that session as well. Following ratification of the Nineteenth Amendment in August 1920, Meredith supported Paul's campaign for an equal rights amendment to guarantee full equal rights for women throughout the country. Like Paul, she believed that securing the vote for women was not enough to ensure gender equality. Meredith served on the advisory board of the National Woman's Party and as chairman of the Virginia branch until her death in 1928. Not long before Meredith died, she wrote Paul to update her on the Virginia General Assembly's continued lack of support for laws that would assure women's equality. Even though she did not expect the assembly would ever pass any such laws, she believed it was important to keep the issue in front of the legislators each year.

Sophie Gooding Rose Meredith died of pneumonia at her Richmond home on 27 August 1928 and was buried in the city's Hollywood Cemetery following a funeral that was attended by Alice Paul. In an editorial tribute the Richmond News Leader stated, "Richmond women who fought the great battle for equal suffrage are mourning today for Mrs. Charles V. Meredith, who, twelve years ago, threw all her strength and all her social gifts into the contest. She differed from some of her associates on the question of federal enfranchisement, but she held their warm affection. She was among the captains who planned and executed in Virginia a campaign that was as good-tempered as it was brilliant." The phrase "A zealous pioneer for women" was inscribed on her tombstone.

Written for the Dictionary of Virginia Biography by Sophie Meredith Sides Cowan.