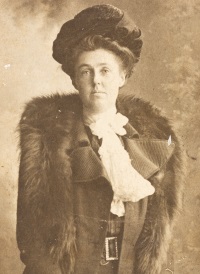 Faith Walcott Morgan (7 April 1869–19 December 1964), woman suffrage activist, was born in New York City and was the daughter of Alfred Foster Walcott and his first wife, Ruth Robinson Morgan Walcott. Her father was wealthy and socially prominent, and she was related to several well-known families. She spent part of her youth living in San Francisco, California, where her father was a bank president. While the family was in Europe late in 1883, her mother died, and they returned to New York. On 6 May 1891 in Great Neck, Long Island, New York, she married Edward Morgan, a socially prominent stockbroker. They lived in New York and in suburban Nutley, New Jersey, where she was a charter member of the woman's club and treasurer of the Nutley Improvement Society. They had one daughter, who died at age eight, and one son. About 1912 her husband retired, and they moved to Virginia. They resided in the fashionable Victoria Boulevard neighborhood between Hampton and Newport News, near where her younger sister, Fanny Morgan Walcott, lived after she had previously settled in Hampton near their maternal aunt Mary Frances Morgan Armstrong, whose brother-in-law Samuel Chapman Armstrong had founded Hampton Normal and Agricultural Institute (later Hampton University).

Still relatively new to the state, Morgan marched with leaders of the Equal Suffrage League of Virginia in the 3 March 1913 suffrage parade in Washington, D.C. Also that year, she and fellow suffragist Ellen Llewellyn Robinson collected 1,200 signatures in support of woman suffrage in Hampton and Newport News on a petition to the General Assembly. Morgan joined the Newport News Equal Suffrage League and became financial secretary by 1914. She was elected chair of the league's executive board in 1915, having already acted as the unofficial head of the closely affiliated Hampton and Newport News leagues. That year she was one of Virginia's delegates to the annual convention of the National American Woman Suffrage Association, of which the state league was an affiliate. Concurrently, Morgan's sister chaired the Hampton League from 1915 to 1917. The two leagues often collaborated, setting up booths at fairs and hosting public events with speakers to educate and motivate the public. They participated in parades; circulated suffrage magazines, books, and promotional literature; sent letters to senators, congressmen, and state legislators; and continued to collect petition signatures and enrollments from women and men in support of state suffrage. Her husband fully supported Morgan's work and named his sailboat Suffragette. He died suddenly, likely from a heart attack, while fishing on his boat on 21 June 1916. At the state convention that November, she was elected a vice president, in which office she served until women won the vote in 1920.

In addition to Morgan's work in Newport News and Hampton, she occasionally worked with Virginia league president, Lila Hardaway Meade Valentine, to organize branches of the Equal Suffrage League in southeastern Virginia. While visiting New York in 1915, Morgan made a point to visit suffragists there and shared what she had learned with her Virginia colleagues. In 1917 she and two other Virginia suffragists went to New York for several months to aid in the successful campaign to pass a suffrage amendment in that state. Making her headquarters in Ulster County, she worked with district chair Margaret Morgan Norrie, a cousin. The 22 September 1917 issue of The Woman Citizen reported on Morgan's work: "She devotes from five to six hours daily to canvassing, visiting and general propaganda work, and has already secured more than 600 signatures to a petition. On July 10 Mrs. Morgan brought in signatures to 150 food registration cards," as part of the food rationing program during World War I. "She is an enthusiastic and indefatigable worker for the cause of equal suffrage, as well as for other good causes, and Virginia is glad to be so well represented in the New York State campaign."

In 1918 the Equal Suffrage League of Virginia began to collect pledges from citizens to support woman suffrage in hopes of convincing the General Assembly that a federal amendment had widespread support. Beginning in January Morgan traveled the state for weeks at a time, paying all her traveling expenses as well as for the suffrage literature she passed out. Starting in Danville, she then went to Manassas, Culpeper, and Fredericksburg before resuming her work in the Shenandoah Valley in the spring and on the Eastern Shore in the summer. She continued crisscrossing the state throughout 1919. Often traveling alone and dependent on the railroad because she did not drive, Morgan planned her work to achieve maximum results by going to towns with a large enough population and hotel rooms or boarding places she could use as a base of operations. Not a comfortable public speaker, perhaps as a result of her partial hearing loss, Morgan was very effective in small groups and did her best work going door to door. The pace was slow and labor intensive. She actively sought out men and women of social influence, including local ministers and teachers, to sign her petitions, preferably at the top of the page, to encourage other people to sign below their names. Morgan's many letters to fellow suffragists provide a detailed record of her progress and the obstacles she faced, as well as a view into the current state of suffrage sentiment in Virginia, especially during the autumn of 1919. The league's executive secretary, Edith Clark Cowles, who wrote the Virginia chapter for The History of Woman Suffrage (1922), singled out Morgan for special commendation. "The enrollment of 32,000 men and women was accomplished in 1919, Mrs. Faith W. Morgan, a vice-president of the association, securing the largest number of names."

Morgan moved to Richmond about 1920 and joined the Virginia League of Women Voters, which succeeded the Equal Suffrage League that autumn. She was active in the city's league and also helped organize other local branches. In 1925 she was elected to a term as first vice president of the Virginia league and in 1932 was named an honorary vice president. As she had in Newport News, Morgan occasionally wrote letters to editors of Richmond newspapers to comment on topics ranging from questions of civic beauty, military dress requirements, child labor laws, mourning dress, and the separation of church and state. Her son became a stockbroker in the city later in the 1920s and she resided with his family. She remained close friends with former suffragist and Virginia League of Women Voters president Adèle Clark, who lived nearby. Faith Walcott Morgan suffered poor health during her later years and died of heart failure on 19 December 1964 at the nursing home where she lived in Richmond. Her body was cremated and her ashes buried near those of her husband at All Saints' Episcopal Church Cemetery in Great Neck, New York.

Image courtesy of the Morgan family.

Written for the Dictionary of Virginia Biography by Margaret R. Rhett.