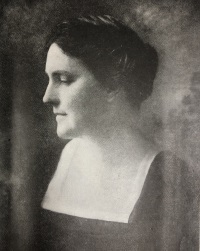 Mary-Cooke Branch Munford (16 September 1866–3 July 1938), educational reformer and civic leader, was born in Richmond, Virginia, and was the youngest child of James Read Branch and Martha Louise Patteson Branch. She hyphenated her first names because she was known throughout her life as Mary-Cooke. Her father, who had served in the Confederate army and founded a bank, died when she was a young child. She attended private schools in Richmond and New York and hoped to enroll in college, but her mother was adamant that an advanced education was socially incorrect and unnecessary for women. A dutiful daughter, she followed her mother's wishes. Denied an opportunity to attend college, she spent much of her adult life working for the advancement of women's education.

Born into a wealthy and conservative family, Mary-Cooke Branch displayed an unusual and early interest in social welfare issues. That attracted the attention of a like-minded Richmond lawyer, Beverley Bland Munford. They married in Richmond on 22 November 1893 and had one daughter and one son. Walter Russell Bowie, a young orphaned nephew, also lived with them for a time and had a distinguished career as an Episcopal clergyman in Richmond and New York and in 1942 published an admiring biography of her entitled Sunrise in the South: The Life of Mary-Cooke Branch Munford.

In 1894 Munford organized the Saturday Afternoon Club, a literary study club, and that same year helped found the Woman's Club of Richmond, which became one of the city's preeminent literary and cultural organizations. While serving as president in 1900–1901, Munford secured the funds that enabled the club to purchase its permanent headquarters. Munford and her husband shared a concern about the poor state of public education in Virginia. In 1900 they worked with Lila Hardaway Meade Valentine to establish the Richmond Education Association to stimulate interest in and support for the city schools. Munford served as president of the association from November 1904 until she stepped down at the end of her final term in 1911. While president, she published an essay, "Woman's Part in the Educational Progress of the South," for the multivolume The South in the Building of the Nation series and noted, "The step from the home to the schoolhouse is a short and natural one." She was also active in the Co-Operative Education Association of Virginia (later the Virginia Congress of Parents and Teachers), a progressive organization that worked for improvements in the public school system for all Virginians, rural and urban, black and white. Munford helped lead a successful campaign in May 1905 to raise awareness and to organize local associations to advocate for a nine-month academic year, new high schools, industrial and agricultural training in schools, increased teacher training, and improved conditions for teachers and students. As president of the association from 1910 until resigning in February 1925, Munford traveled around the state, speaking about the importance of community support for schools. On 29 November 1920 she became the first woman elected to Richmond's school board, serving until 31 July 1931, when she resigned after moving into a different district. Twenty years later the school board named a new elementary school for her.

Early in 1910 the Munfords and other interested friends met to explore ways to improve women's opportunities for higher education in Virginia. They discussed the possibility of establishing a coordinate state college for women at the then-all male University of Virginia to allow women students access to the university's library and to the faculty. Munford's husband died on 31 May 1910 of the tuberculosis that had required them to spend extended periods of time in the western United States. She nevertheless continued to work tirelessly on behalf of the coordinate college. Munford had outstanding organizational abilities and managed to gather significant public support. She and a co-author wrote an essay for the 1914 Alumni Bulletin of the University of Virginia that documented the inequalities in advanced educational opportunities in Virginia and asked, "But what of the girls and women of the State?" The Co-Ordinate College League, formed under her leadership, persuaded members of the General Assembly to introduce bills during five sessions of the General Assembly in the 1910s, but none passed. In 1916 the bill failed by only two votes in the House of Delegates. Even though the league did not endorse coeducation at the university but rather the opportunity to share facilities and faculty as a coordinate women's college, many loyal alumni publicly opposed any attempt to open the university to women.

After the United States entered World War I, Munford's lengthy battle to establish a coordinate college was over, but her campaign for improved higher education for women had some effect. The College of William and Mary admitted women in 1918, and in 1920 Munford became the first woman member of the college's board of visitors. That same year, the University of Virginia admitted white women to its graduate and professional schools. Munford served on the university's board of visitors from 1926 until her death. In 1951 the University of Virginia named a dormitory for her and in 2018 the College of William and Mary renamed its central plaza in her honor.

Munford's campaign for a coordinate college preceded ratification of the Nineteenth Amendment. Without the vote, she and women like her had a limited ability to apply direct political pressure. Munford was a member of the Equal Suffrage League of Virginia and of its Richmond chapter. She was not as active as some women, but she had a prominent place on the program of the league's 1919 state convention. One session featured a series of short lectures under the general theme, "Concerning Woman Suffrage—What Is the Matter with Virginia?" After several speakers addressed why businesswomen, teachers, church leaders, and other Virginia women wanted the vote, Munford answered the question, "Well Then, What Is the Matter?" She was blunt in her comments that Virginia's politicians were slow and shortsighted in not giving women the right to vote.

During World War I Munford headed the Virginia Division of the Woman's Committee of the Council of National Defense, which focused on food conservation and production and working conditions for women in war-related industries. At her urging, committees were also organized by African American women. After the war she was an associate member of the Virginia War History Commission and helped with the collection of materials related to relief organizations. Although her most productive years were spent on educational reform, her activism included a number of other interests. Munford was a founding officer of the Virginia League of Women Voters and attended conventions of the National League of Women Voters, including those held in 1922 and 1925. She was elected a member of the Democratic National Committee in 1920 and was a delegate to the party's 1924 national convention.

Munford participated in numerous other national reform movements. She joined and frequently held office in such organizations as the National Consumers' League, the Young Women's Christian Association, and the National Child Labor Committee. She continued to be an advocate for interracial cooperation and improved social and educational conditions for all of Virginia's citizens. In the 1910s Munford joined other prominent white and African American women in helping Janie Porter Barrett establish the Industrial School for Colored Girls (later the Virginia Industrial School for Colored Girls). Munford sat on the school's board of directors and board of managers and made her home available for monthly board meetings. She was also a member of the Virginia Commission on Interracial Cooperation and the regional Commission on Interracial Cooperation and served on the boards of Fisk University and the National Urban League. In 1924 she was a founding officer of the Richmond Urban League. Her attitude toward racial uplift was progressive for the time, but she did not openly challenge racial segregation or advocate full equality.

Munford devoted her life to advocating opportunities for women, African Americans, and all Virginians. Ill health slowed her activism, and by the 1930s she had resigned most of her board memberships. Mary-Cooke Branch Munford died of acute ileus, an intestinal obstruction, on 3 July 1938 at her Richmond home and was buried in Hollywood Cemetery. An editorial tribute in the Norfolk Virginian-Pilot noted that "For many years, beginning with the turn of the century, she was as far as educational and social questions were concerned, the most distinguished and therefore the most influential woman 'radical' of a very complacent and tradition-serving day."