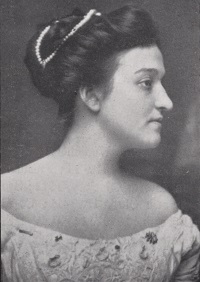 Eudora Woolfolk Ramsay Richardson (13 August 1891–6 October 1973), writer and women's rights advocate, was the daughter of David Marshall Ramsay and Mary Woolfolk Ramsay and was born in her mother's hometown of Versailles, Kentucky. She grew up in Charleston, South Carolina, where her father was minister at Citadel Square Baptist Church, until 1907 when he moved to Richmond, Virginia, to be pastor of the Grace Street Baptist Church. She was educated at Hollins Institute (later Hollins University), from which she graduated in 1910, and at Westhampton College (later part of the University of Richmond), from which she graduated in 1911. An impassioned young woman who established herself as a talented writer and literary critic, Ramsay specialized in English language and literature and embraced woman suffrage. In the 1911 college yearbook, The Spider, of which she was an editor, she was described as "just a few years ahead of her time" on that subject. "Miss Ramsay has come to know that the only real superiority of man over woman is found in the supreme egotism of the male."

She moved to Greenville, South Carolina, and in 1912 became head of the English Department at Greenville Woman's College (later part of Furman University), of which her father had become president the previous year. She encouraged her students in the literary arts and boldly pushed them to embrace women's rights. In March 1913 she participated in the national woman suffrage parade held in Washington, D.C., and the following year was founding secretary of a suffrage league in Greenville. Richardson continued her own studies while teaching through the end of 1914 and earned a master's degree from Columbia University that year.

Woman Suffrage Organizer
In 1915 Ramsay resigned as publicity chair for the South Carolina Equal Suffrage League and spent the summer working in Pennsylvania as a field organizer for the National American Woman Suffrage Association. During the next three years she spoke and organized women in support of suffrage in Pennsylvania, Maine, New York, South Carolina, Tennessee, West Virginia, Oklahoma, and Virginia. Late in 1915, Lila Hardaway Meade Valentine, president of the Equal Suffrage League of Virginia, arranged to pay part of her salary while Ramsay traveled across the state speaking to groups. Virginia suffragists were as impressed as people elsewhere with Ramsay's speaking ability and her organizational skill. "She goes to a perfectly new place," Valentine explained, "calls on the minister, gets the names of prominent women and before long has the meeting arranged. She spoke three or four times a day and almost every Sunday night in a church."

Ramsay returned to Virginia in January 1916, when she joined other suffragists in speaking before the General Assembly's Joint Committee of Privileges and Elections in an unsuccessful attempt to secure a state suffrage amendment, and again later that year to organize chapters in the southeastern part of the state. The Equal Suffrage League subsequently followed the national association's shift from a state-by-state campaign to securing passage of a federal amendment. During her April 1917 campaign on the Eastern Shore, Ramsay organized about a dozen new chapters in two counties, and in May she traveled more than a thousand miles in several trips across southern Virginia as well as into the Shenandoah Valley. In addition to founding new local leagues, she collected money for the cause and spoke frequently to crowds that ranged from a few individuals to scores of men and women.

On 13 December 1917 in Greenville, South Carolina, Ramsay married Fitzhugh Briggs Richardson, a Surry County, Virginia, attorney she met when speaking for woman suffrage. They moved to Richmond, where he served briefly as an assistant attorney general of Virginia and later as chair of the board of Virginia Mutual Savings and Loan Association. They had one daughter. The marriage terminated her work as a field organizer, but she continued to speak on behalf of the Richmond Equal Suffrage League. During World War I she served as director of the Woman's Division of the War Loan Organization in the Fifth Federal Reserve District and worked as publicity director and instructor of publicity at the secretarial school of the local Smithdeal Business College.

Women's Rights Advocate
With ballots in women's hands following ratification of the Nineteenth Amendment in 1920, Eudora Ramsay Richardson, as she was generally known, devoted her career to ensuring that women embraced civic life. She was named to the organizing committee of the Virginia League of Women Voters that autumn. Early in the decade she helped organize the Virginia division of the American Association of University Women, having served as president of the Richmond chapter. She was active in the Democratic Party and as with every other cause was diligent and unwavering. Richardson participated in state and national campaigns and in 1936 registered Chesterfield County women to vote. From 1930 to 1938 she sat on the Virginia State Board of Public Welfare. As the field representative for the National Federation of Business and Professional Women's Clubs beginning in 1932, Richardson visited dozens of cities and towns in twenty-six states and delivered more than a hundred talks—and that was in just twenty-five weeks during her first year.

Author
Richardson left the national federation in October 1935 to return to writing, although she served as president of the Richmond federation the following year and later chaired the public relations committee of the Virginia Federation of Business and Professional Women's Clubs. She had published Little Aleck: A Life of Alexander H. Stephens, in 1932 after some male critics questioned whether women could write serious biographies. "In returning to the writing," she admitted at the time, "I shall of course continue my efforts in behalf of the advancement of women." Richardson crafted her prose with the same cunning and conviction that marked her political activism. Her bibliography is extensive. As author and editor, in journals and newspaper columns, Richardson's byline appeared in publications across the country. Her topics varied. Some of her works concentrated on Virginia history, but others reflected the social and political experiences of contemporary woman. In 1936 she published The Woman Speaker, a handbook on public speaking. Later that year, she released The Influence of Men—Incurable, a response to John Erskine's 1936 book, The Influence of Women and Its Cure. A blend of historical research and political theory infused with social satire, Richardson's book articulated her complete and unwavering belief in women's equality with men. Both books brought Richardson national acclaim and solidified her legacy as an influential feminist author.

Virginia Writers' Project
In March 1937 Richardson became state supervisor of the Virginia Writers' Project. Part of the New Deal's Works Progress Administration (later the Work Projects Administration), the program hired out-of-work teachers, journalists, and researchers to produce a bevy of articles, texts, and scripts that documented and shared Virginia history and culture. The Virginia Writers' Project was one of the best and most productive in the country. Its published works included Virginia: A Guide to the Old Dominion (1940), of which Richardson was editor and co-author. The program sponsored and published several county histories and she edited The Negro in Virginia (1940), which was the best work published on the state's African Americans to that date. The Virginia Writers' Project also began, but was unable to complete, several ambitious research projects to document antebellum buildings in the state, to interview hundreds of people, including former slaves, to preserve their accounts of their lives, and to begin compilation of a biographical reference work on Virginia. After the Work Projects Administration ceased functioning early in World War II, Richardson researched and wrote histories and training manuals for the Army Quartermaster Technical Training Service.

Later Years
When Richardson retired from public service in August 1950, the commanding officer of Fort Lee commended her service as head of the Quartermaster's history branch. Throughout the decade she continued to speak on historical topics and women's rights at various forums around Richmond. Her husband died of a heart attack on 13 July 1964. Eudora Woolfolk Ramsay Richardson died of a stroke in Richmond on the evening of 6 October 1973. She was buried in the city's Hollywood Cemetery.

Written for the Dictionary of Virginia Biography by Andrea Ledesma.