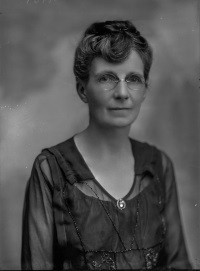 Sarah Blair Harvie Wormeley (25 July 1869–27 December 1964), nurse and woman suffrage activist, was the daughter of Mary Anderson Harvie and John Blair Harvie, and was born probably on the family farm in Henrico County, Virginia. As a child, she lived for several years in her mother's native Montgomery County but later moved to Richmond, where in the 1890s she received a diploma from the nursing school of Saint Luke's Hospital. She attended the 1901 founding convention of the Virginia State Association of Nurses (after 1905 the Graduate Nurses' Association of Virginia and still later the Virginia Nurses' Association). She helped prepare the constitution of the association, which had been organized with the purpose of "elevating the standard of the nursing profession." In 1904 she passed the State Board of Examiners of Graduate Nurses examination.

Harvie participated in the work of the Nurses' Settlement, which had been founded in 1900 to provide care for poor residents of Richmond. Early in 1902 she joined nurses Sarah "Sadie" Heath Cabaniss and Nannie Jacquelin Minor to help found (with the assistance of reformer Lila Hardaway Meade Valentine) the Instructive Visiting Nurse Association to expand the settlement's work. The association was part of a national progressive movement to provide trained nurses and social workers for the public health sector. The founders divided Richmond into three districts with Harvie responsible for nursing care in the eastern part of the city. In a newspaper interview years later, she recalled, "We were supposed to work from 9 to 5 o'clock, but many nights 10 o'clock and later found me in strange, and often dangerous places, and the salary was $37.50 a month." This pioneer group of nurses made thousands of house calls, taught classes on childcare, hygiene, and cooking, and later opened a tuberculosis clinic and a mission kindergarten. To overcome widespread resistance to the program by physicians, all nursing services had to have a doctor's permission.

While working as a private nurse Harvie had met Carter Warner Wormeley, later known as the "Bishop," who became a popular newspaper columnist and poet who worked for the state as a publicity director. They married on 30 December 1902 and had one son. Following her marriage, Sarah Wormeley resigned from the Instructive Visiting Nurse Association, effective 15 February 1903. She may have continued to work occasionally as a private nurse and she volunteered during the 1918 influenza pandemic, after which she withdrew from public nursing.

Wormeley joined the Equal Suffrage League of Virginia soon after Lila Meade Valentine and other prominent Richmond women organized it in November 1909 to "advance the legal, industrial and educational rights of women, and to secure the suffrage for women on equal terms with men" by an amendment to the state constitution. Wormeley served as a ward representative in the Richmond branch of the league in 1919 and was a member of the credentials committee of the state convention that same year. She was not one of the most conspicuous woman suffrage advocates, but a Montgomery County resident recalled in 1936 that during annual summer vacations in the county, Wormeley tried to organize a league chapter there. Wormeley "talked with many of the women and men of the community," the woman reported, "explaining the aims of Woman Suffrage, overcoming prejudices and building up a correct understanding of a much discussed topic of that day. She was untiring in her efforts, and great was her devotion to the cause." For a 1918 thrift stamp parade in Richmond, the Equal Suffrage League decorated a float on which Wormeley's fourteen-year-old son, Ralph Harvie Wormeley, rode dressed as Uncle Sam.

In September 1920, following ratification of the Nineteenth Amendment to the Constitution of the United States, Wormeley and Eugenia Benson Jobson volunteered in the city registrar's office and helped thousands of Richmond women register to vote. This voter registration campaign was so successful that it attracted national attention, and a local newspaper stated, "Without the aid of these volunteer workers registration of the woman electorate would have been practically impossible." On election day, using a borrowed car, Wormeley and several other women monitored the polling places "like veteran ward workers" and provided new female voters with "information or advice."

Like other suffrage activists, Wormeley continued her political activities. In the autumn of 1920, she was a founding member of the Virginia League of Women Voters, and in 1924 she was the state chair of business cooperation in the league's 1924 campaign to get out the vote. She played a key role in the league's publication of its fund-raiser, the Virginia Cookery Book: Traditional Recipes (1921). Wormeley also joined the Richmond league and throughout the decade participated in its membership campaigns. She and her husband had deep roots in Virginia and shared an interest in genealogy. In 1928 Wormeley and her brother, Lewis Edwin Harvie, wrote and privately published The Harvie Family. She later donated Wormeley family papers and portraits to the Virginia Historical Society (later the Virginia Museum of History and Culture). Wormeley's husband died on 24 August 1938. Sarah Blair Harvie Wormeley died of heart disease at her Richmond residence on 27 December 1964 and was buried in Hollywood Cemetery in the city.