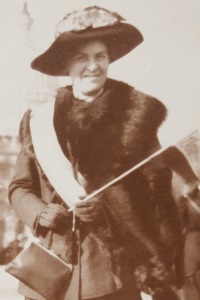 Elizabeth Dabney Langhorne Lewis Otey (4 October 1880–28 February 1974), economist and woman suffrage activist, was born in Lynchburg, Virginia, and was the daughter of John Henry Lewis and Elizabeth Dabney Langhorne Lewis. Her mother was a niece of Orra Henderson Moore Gray Langhorne who supported woman suffrage in the 1890s, and she was a first cousin of Nancy Witcher Langhorne Shaw Astor, viscountess Astor, the first woman to serve in the British House of Commons.

Economist
Lewis was educated in the preparatory school at Randolph-Macon Woman's College (later Randolph College) in Lynchburg and at Bryn Mawr College, where she engaged in social work in Philadelphia and was active in the college's musical life. After graduating from Bryn Mawr in 1901 she returned to Randolph-Macon Woman's College for one year, studied at the University of Chicago for the 1903–1904 academic year, and then entered the University of Berlin. She earned a doctorate in economics in 1907 for her dissertation, Ein Beitrag zur Entwieckelung der Baumwollindustrie in den Nordamericanischen Südstaaten, published in English the same year as A Contribution toward the Development of the Cotton Industry in the South of U.S.A.

Returning to the United States and residing in Washington, D.C., Lewis continued her interest in business and labor. She prepared a report, The Beginnings of Child Labor Legislation in Certain States: A Comparative Study (1910), for the Department of Commerce and Labor and in 1913 the Department of Labor's Bureau of Labor Statistics published her Employers' Welfare Work. In the 1910s she was a member of the National Conference of Charities and Corrections.

Suffrage Activist
On 4 June 1910 Lewis married a Lynchburg businessman, Dexter Otey. They had one daughter. Not long after the birth of their daughter in 1911, Otey joined her mother in active support of woman suffrage. She was probably a founding member of the Lynchburg Equal Suffrage League, of which her mother was president for ten years, and was active on behalf of the Equal Suffrage League of Virginia, of which her mother was vice president from 1911 to 1920. Otey became a board member of the Lynchburg league and its treasurer by 1914.

In the spring of 1912, while working on Employers' Welfare Work and with an infant child to care for, she agreed to speak to the Virginia Federation of Labor in support of woman suffrage, but a sudden illness prevented her from doing so. The following year, however, she and state league president Lila Hardaway Meade Valentine spoke to the convention of the Virginia Federation of Labor in Danville. Also in 1913 Otey joined numerous Virginia suffragists who marched in the national suffrage parade in Washington, D.C., on the eve of President Woodrow Wilson's inauguration. The following year Otey proposed to establish a statewide suffrage speakers' bureau. When illness prevented Valentine from attending a national suffrage convention in 1915, she asked Otey, her mother (who was a cousin of Valentine), and one other woman to represent her.

Early in 1915 Otey organized a suffrage education program in Lynchburg. In the spring she planned to accompany her mother on a speaking tour to organize local suffrage leagues, and she later helped reorganize the suffrage league at Randolph-Macon Woman's College. On 20 April 1917 the Lynchburg league published five thousand copies of The Lynchburg Woman's Suffrage News. Otey was its editor, but unfortunately no known copies survive.

After the General Assembly voted against suffrage amendments in 1912 and 1914, Virginia suffragists were divided about whether advocating an amendment to the United States Constitution was a sound idea because some worried that a federal amendment would meet resistance from states' rights politicians. Otey and other Virginia women who saw less reason to hope for a state amendment formed a Virginia chapter of the Congressional Union for Woman Suffrage in the summer of 1915 to support a federal amendment. Otey was one of the vice chairmen of the Virginia chapter. During the state convention of the Equal Suffrage League in Norfolk in November 1916, Otey, Sophie Gooding Rose Meredith, chairman of the Virginia Congressional Union, and Norfolk suffragist Pauline Forstall Colclough Adams ventured to the streets to speak in favor of a federal amendment.

Otey and her mother were among a group that attended the 1916 Republican State Convention, which endorsed woman suffrage at their request. Growing more active, Otey traveled to Washington with her mother in August 1917 for a demonstration in which Otey and others carried banners accusing "Kaiser Wilson" of ignoring democracy for millions of American women. As they prepared to march on the White House, people snatched the banners and broke up the rally. Otey's support of what some suffragists regarded as unladylike militancy seriously worried some leaders of the Equal Suffrage League after Congress submitted the Nineteenth Amendment to the states in 1919. Invited to address the Republican Party State Convention in March 1920, Otey let it be known that she spoke for the National Woman's Party (the renamed Congressional Union) and not on behalf of the Equal Suffrage League of Virginia. Referring to the Washington demonstrations, the Lynchburg News reported that she told the convention, "We wanted to be disagreeable so that they would take notice."

During World War I Otey, her mother, and many other suffragists devoted their energy to supporting the war effort. Otey served on the board of the home economics section of the war food administration in Lynchburg and later chaired the committee that compiled and preserved records of the city's war-related work for the Virginia War History Commission. Early in 1920 Otey, then chair of the Sixth Congressional District for the Virginia National Woman's Party, joined other suffragists in Richmond to lobby the assembly to ratify the Nineteenth Amendment. They were not successful, but the assembly did pass legislation enabling women to vote that year if enough other states ratified the proposed amendment.

Political Activity
In November 1920, when she voted for the first time, Otey voted for Socialist Eugene V. Debs for president. In 1921, perhaps because of the Virginia Republican Party's endorsement of woman suffrage during the 1910s or reflecting her father's political affiliation rather than her mother's, Otey sought and won the Republican nomination for superintendent of public instruction. She was the first woman nominated by a major party for statewide office in Virginia. The Republican convention excluded most of the African Americans who had been elected delegates to it. As a result, the so-called "lily-white" Republican ticket faced opposition from a ticket consisting of all-black Republicans, with Richmond banker and social reformer Maggie Lena Mitchell Walker opposing Otey and Democrat Harris Hart. Otey received more than 59,000 votes out of more than 208,000 cast, less than one-third, which was typical for Republican candidates at that time.

Otey briefly returned to Bryn Mawr in 1923 as a tutor in economics, and she resumed her work on behalf of working people and remained active on issues relating to women. In 1924 the Christian Social Justice Fund published her short study, The Cotton Mill Workers on Jones Falls, Baltimore. Otey traveled to Paris in 1926 with a small delegation from the National Woman's Party but failed to gain formal admittance to the meeting of the International Woman Suffrage Alliance (later the International Alliance of Women). The League of Women Voters (of which her mother was then state president) opposed the party's admittance partly because of its insistence on a declaration of full equality for men and women in public and economic life. In 1932 Otey lectured at the Southern Summer School for Women Workers in Industry. She was also president of the Lynchburg chapter of the American Association of University Women from 1927 to 1929 and of the Virginia chapter from 1929 to 1931.

In 1931, when Otey sat on the state Socialist Party's executive committee, she ran for the House of Delegates from Lynchburg as a Socialist but received only 25 of 488 votes cast. She was a candidate for presidential elector on the Socialist Party ticket in 1932. In 1933 Otey was the party's nominee to oppose Democratic Party leader Harry Flood Byrd (1887–1966) and a Republican for the United States Senate, but received a mere 1,130 votes out of 167,401 cast.

Later Years
Otey moved back to Washington sometime after her husband died on 3 June 1933 and worked for the Social Security Administration, for which she contributed to a study published in 1940 entitled An Outline of Foreign Social Insurance and Assistance Laws. She later worked for the Foreign Economic Administration until she retired in 1948. After World War II Otey spent time with her namesake daughter and husband, William Clark Watson, an oil company executive, while they lived in Asia. Otey returned to Lynchburg in old age. She published a small book in 1972 on her parents' genealogies, The Lewis, Harrison, Bezer, Schooolfield Ancestry of John H. Lewis, d. 1907, of Lynchburg, and the Wiatt Ancestry of His Wife, Elizabeth D. Langhorne, d. 1946. In 1973 as one of the few surviving prominent Virginia suffragists Otey gave an oral history interview about her involvement in the woman suffrage movement to a University of Virginia graduate student. Elizabeth Dabney Langhorne Lewis Otey died of pneumonia in a Lynchburg hospital on 28 February 1974. Her ashes were buried at Spring Hill Cemetery in Lynchburg. In 1994 the Elizabeth Lewis Otey Professorship in East Asian Studies was established by her daughter's will at Washington and Lee University.